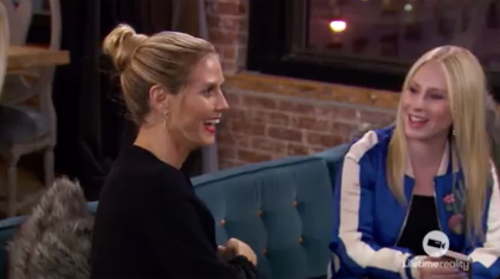 Tonight on Lifetime their Emmy Award nominated series Project Runway airs with an all-new Thursday, October 20, 2016, and we have your Project Runway recap below!  On tonight’s Project Runway season 15 episode 6 “There IS Crying in Fashion” model Emily Ratajkowski is the guest judge.

On the last Project Runway Season 15 episode 5, Business savvy was tested in Season 15’s first team challenge. Here, the designers had to pitch collection ideas to raise money from a group of mystery investors.  Did you watch the episode?  If you missed it we have a full and detailed recap, right here!

On tonight’s Project Runway episode as per the Lifetime synopsis, “A press event bash turns into a challenge, spoiling the designers’ festive mood. Model Emily Ratajkowski is the guest judge.”

Tonight’s episode of Project Runway kicks off with a cocktail party at Elyx, the designers get a chance to mingle with the celebrity judges and get to know them. Heidi Klum calls for a toast and announces that it is time announce their next design challenge – everyone will be designing a cocktail dress tonight. They will have one day to complete the dresses, and the designers will receive a fabric budget of $300.

The designers spread out and begin sketching their dresses right in the middle of the cocktail party. Mah-Jing is inspired by the drinks they have been sipping all night, he wants to create a “Sweat Effect” on his dress to recreate the way a drink sweats.

After their sketches are complete, Tim Gunn whisks the designers off to Mood to pick out their fabrics. Nathalia has her eyes on a beaded fabric, and it’s very expensive so she isn’t able to get a lot of it, but she is certain that she will be able to make the dress that she has been envisioning with it.

The designers head to the sewing room with their fabrics and supplies – Brik has bought an entire pile of sequined silver and black fabrics, his work table looks like a disco ball. Jenny gets to work with some feathers and gold embellishments. Meanwhile, Cornelius is stalking around the room and disses Nathalia’s choice of fabric. He thinks that she is going to be in trouble.

Tim Gunn arrive after a few hours to give the signers some critiques. He’s impressed with Jenny’s dress, even though everyone thinks she is copying Erin. Tim’s critiques are tough tonight. He basically tells Cornerlius, Tasha, and Nathalia to scrap their dresses and start all over. Nathalia is freaking out – because she spent almost her whole budget on just one yard of fabric that Tim says is hideous.

After Tim Gunn leaves, the designers are basically in full-blown panic mode. The next morning, the models arrive for their fittings, and most of the designers don’t even have anything to put on their models yet. Of course, Erin’s dress is basically done already. Tasha is running around the sewing room and getting scraps of fabric from Jenny to try and restart her dress from scratch. Dex gives her a pep-talk and tries to reassure her that she will be just fine.

There are only a few hours remaining before the runway show. The majority of the designers are not finished – Tim Gunn stops by to give them a pep-talk and encourage them to hurry up. Erin is feeling pretty cocky about her feather dress, and her over-confidence is starting to rub a few of the designers the wrong way. While Nathalia frantically sews her tiny dress on to her model and hopes it doesn’t fall off – the other designers pick out their models accessories for the fashion show. Tim Gunn arrives and announces they are officially out of time. The designers and their models rush down to the runway and everyone takes their seats. Heidi Klum introduces the judges, including special guest celebrity judge Emily Ratajkowski. The lights dim, and the designer’s cocktail dresses begin parading down the runway.

Tim Gunn arrives and announces they are officially out of time. The designers and their models rush down to the runway and everyone takes their seats. Heidi Klum introduces the judges, including special guest celebrity judge Emily Ratajkowski. The lights dim, and the designer’s cocktail dresses begin parading down the runway.

After the runway show, Heidi Klum announces that Laurence, Nathalia, Tasha, Rik, Erin, and jenny have the highest and lowest scores of the night. One of them will be named the winner of the challenge, and one of them will be eliminated and sent home. The rest of the designers are safe this week.

Nathalia explains that her dress was inspired by the chandeliers at the cocktail party – but the judges are not impressed. Heidi scoffs that it looks like a “cheap prom dress.” Nina adds that there is nothing luxurious about it. And, she points out that it is crooked in the back. Nathalia tries to explain that she scrapped the dress and had to start over. Emily jumps to Nathalia’s defense, she actually likes the dress.
Rik’s orange leather dress is actually a hit with the judges. They are impressed that he was able to make orange leather work – and they agree that it is beautifully made. Heidi adds that it is a “real eye-catcher.”

The judges also rave over Lauren’s dress, she certainly has a knack for black leathers and shoulder pad.

Tasha’s dress was done in just a few hours and it shows. The Project Runway judges let her know that they are not impressed and it’s obvious the dress was whipped off in just a few minutes. Interestingly, the judges HATE Erin’s dress and her feathers, even though she was certain she was going to win this competition. The judges praise Jenny’s dress, but Heidi Klu points out that it definitely look like she stole Erin’s bedazzling style.

After careful consideration, it’s time to announce the winner and loser of this week’s competition. Heidi announces that this week’s winner is Jenny. Tonight’ loser is Tasha, she’s officially eliminated from Project Runway.