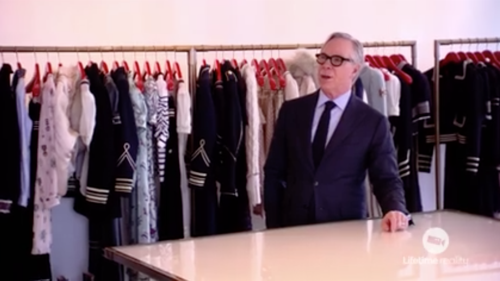 Tonight on Lifetime their Emmy Award nominated series Project Runway airs with an all-new Thursday, October 27, 2016, and we have your Project Runway recap below!  On tonight’s Project Runway season 15 episode 7 “Welcome to the Urban Jungle” the guest judge is designer Rebecca Minkoff.

On the last Project Runway Season 15 episode 6, a press event bash turned into a challenge, spoiling the designers’ festive mood. Model Emily Ratajkowski was the guest judge.  Did you watch the episode?  If you missed it we have a full and detailed recap, right here!

On tonight’s Project Runway episode as per the Lifetime synopsis, “The tired and weary clothiers land in Universal Studios Orlando for a reinvigorating break, their experiences at the theme park then serving as inspiration to design looks. The guest judge is designer Rebecca Minkoff.”

Tonight’s episode of Project Runway kicks off with Heidi Klum surprising the remaining designers with a trip to Orlando, Florida. The designers arrive in Florida and Tim Gunn is waiting for them – he takes them to Orlando Studios Theme Park to visit their new attraction, Skull Island. Of course, the trip isn’t all fun and games, Tim announces that this week their challenge is to create Urban streetwear – and they should be inspired by visiting the interactive jungle at Skull Island.

The designers and Tim Gunn jet back to New York City and head straight to Mood to pick up their fabric. They have one day to complete their urban streetwear. Laurence is feeling a little bit of pressure – she tries to stay away from leather, because she knows the judges want to see her show something other than leather jackets.

Meanwhile, Erin has decided that since she was in the bottom last week – she needs to get back to putting embroidery on her outfits, because that seems to be what the judges liked. Erin is feeling pretty confident, Dexter on the other hand, is the exact opposite of confidence, he’s putting together a pretty risky design, and is scared that the judges will send him home for his bubble sleeves on the top he is making.

Jenni has immunity this week, and it’s probably a good thing because the other designers seem to think that her design is not urban enough this week. Last week Nathalia almost went home, so she’s determined to show the judges what she is made of this week.

Tim Gunn arrives to critique the designers’ work so far. He stops at Cornelius’ table first – Tim tells him that his yellow top is a good choice, but he needs to make sure he doesn’t go from Urban wear, to Broadway urban wear.

Tim is worried about Dexter’s look this week, Dex explains that he just wants to be himself and show the judges who he really is.

Erin doesn’t exactly get a raving review from Tim Gunn, he warns her that she might be in over her head and her embroidery is going to take ton of time and she may not be finished in time.

Nathalia gets the worst critique from Tim Gunn though, he’s not impressed with her Dolman sleeve jacket and scoffs that she is supposed to be a street wear designer and her design doesn’t exactly scream streetwear.

It looks like Tim Gunn may have been right about Erin’s shorts – the models arrive for their fitting, and all Erin has is half a pair of shorts done, and she is still embroidering them. Nathalia whispers that Erin’s shorts look like she just picked up some moss off the ground and glued it all over the shorts.
Brik’s outfit is coming together and it is WILD. Apparently, Brik isn’t a fan of matching patterns, his zebra print pants nearly give you a head ache, and are clashing with the top that he has put together.
Hours are ticking down, and it is nearly time for the runway show. Mah-Jing is worried about the other designers, it seems like nobody is even close to being done. Even Laurence, who is normally calm, cool, and collected is racing around and adding finishing touches to this week’s leather jacket to try and make it stand out from her previous leather jackets.

After a trip to the Ulta beauty room to accessorize their models and pick out their hair and make-up, the designers and their models are rushed down to the runway for the show – the judges are waiting for them. No one seems too confident about their designs or really finished. The Project Runway judges are going to have a field day critiquing them this week, including celebrity guest judge Carly Chaikin. The lights dim, and the models begin parading down the runway while the judges take notes.

After the runway show, Heidi announces that Roberi, Brik, Mah-Jing, and Jenni are safe and moving on to the next round – they’re dismissed from the runway. That means that Cornelius, Dexter, Brik, Nathalia, Laurence, and Erin are in the top three and bottom three. One of them will be this week’s winner and one of them will be sent home.

Now, it’s time to hear what the judges have to say about the remaining designs. Erin wanted to try and combine the look or the urban jungle and the real jungle. The judges are not impressed. Zac Posen says it looks like the model got sick all over herself. Nina agrees that it looks “really immature.” Heidi doesn’t hall back and says that it’s a combination of “moss and throw-up.”

Dexter’s risky bubble sleeves seem to be a hit with Nina Garcia. Zac Posen on the other hand is not a fan – he says that there is nothing unique about the look, and Heidi agrees that he is trying too hard to look avant-garde.

The judges love Nathalia’s design this week – it looks like she is back on top, and Tim Gunn might have been a bit harsh during his critiques earlier. Brik’s whacky patterns don’t go well with the judges. The sewing is great, but Heidi snarks that the pants are making her dizzy.

Even though Laurence made another jacket, the judges don’t seem to mind. Zac Posen raves that Laurence is “fierce on a sewing machine.” Heidi brags that she loves the look and she wants to wear it herself. The judges show no mercy to Cornelius – Heidi rages that it looks like a school project and it was horribly sewn and the models “boobies are swimming and falling out.”

The judges show no mercy to Cornelius – Heidi rages that it looks like a school project and it was horribly sewn and the models “boobies are swimming and falling out.”

The judges take a moment to discuss the designs amongst themselves. After careful consideration, it’s time to reveal this week’s results. Heidi Klum announces that Laurence is this week’s winner. And, this week’s loser is Brik. Brik is officially eliminated from Project Runway.