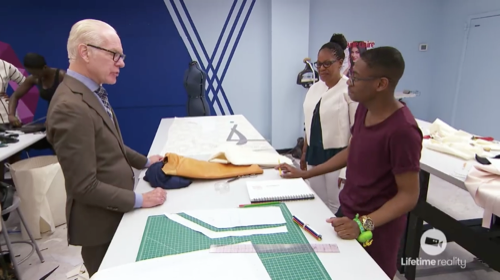 Tonight on Lifetime their Emmy Award nominated series Project Runway airs with an all-new Thursday, November 11, 2016, and we have your Project Runway recap below!  On tonight’s Project Runway season 15 episode 9 “Project Pop Up” Olivia Culpo and Katia Beauchamp are the guest judges.

On the last Project Runway Season 15 episode 7, three-piece collections were created to be showcased in a SoHo pop-up shop. Tensions and tantrums abounded in the season’s second team challenge.  Did you watch the episode?  If you missed it we have a full and detailed recap, right here!

On tonight’s Project Runway episode as per the Lifetime synopsis, “The designers’ loved ones arrive from home for emotional reunions, but drama quickly takes over when the clothiers discover their special visitors will also be their clients, and $50,000 is on the line. Guest judges: Olivia Culpo and Katia Beauchamp.”

Tonight’s episode of Project Runway kicks off the designers meeting up with Tim Gunn to learn what this week’s challenge is. There’s definitely some tension between Cornelius and the other designers after he was eliminated last week, but saved by Tim Gunn and brought back in to the competition.

This week Project Runway is working with the AARP – Tim Gunn and a rep from AARP tell the designers that they have a special surprise for them, the door opens and members of the designers’ families and a few friends come inside. The designers are thrilled to see their loved ones, and rush to greet them, they all share tearful reunions.

Mah-Jing sits down with his mom Bahamadia – they want an Origami inspired outfit. Mah-Jing’s mom wants to feel like she is a “flower blooming.” Meanwhile, Laurence is sketching a design for her daughter. Rik jokes to his mom that he is going to win the competition so he can pay his mom back for all of the money she spent on his college tuition.

Jenny is having a tough time working with her mom though. Jenny’s mom is apparently pretty picky – and she keeps scrapping Jenny’s ideas and adding more to the designs. After everyone has planned out their designs, they head to Mood to pick out the perfect fabric.

The designers head back to the sewing room to get to work on their designs. Jenny is still lost and has no idea what she is making for her mom. Mah-Jing’s mom comes in to be fitted – he is putting together a pants and jacket combo for her and she seems satisfied.

After working for a few hours, Tim Gunn shows up to do their critiques. He starts with Cornelius, he’s making a burnt orange jacket and a skirt for his mom. Tim Gunn seems satisfied, but he’s going pretty easy on the designers since their friends and families are with them.

Tim Gunn is a little concerned that Mah-Jing might be in a bit over his head with the jacket he is making for his mom. He tells him that he needs to get to work, there is a lot of construction involved.

Jenny’s Mom and Tim Gunn aren’t impressed with the skirt and shirt that she is making – Jenny’s mom wants her to scrap the skirt and pick a different color.

Nathalia is making a leather jacket and skirt for her mom. But, Tim Gunn warns her that because of the type of fabric that she chose, the sewing has to be absolutely perfect.

Erin is working on another coat – and adding embroidery and lace underneath, just like she did the last few weeks. Tim doesn’t have too many nice things to say either, he warns Erin that it looks like “kids clothes,” and points out that she has made that kind of coat every week.

Rik is working on a sophisticated dress for his mom, and Tim Gunn has nothing but good things to say about it. He beams that he is excited to see it on the runway. After critiques are over, Tim Gunn and the designers’ friends and families leave so they can get some work done. Erin is upset about Tims critique, but she is being stubborn and thinks that she should stick to her original designs.

Nathalia is working even slower than usual, time is clicking away on the clock and she is not even half way done. Time is up, the designers head back to their rooms to get some sleep – they will have to finish their projects tomorrow.

Day #2 in the work room is mayhem – while the other designers are rushing around to put the finishing touches on their friends and family, and getting their hair and make-up done at the Sally Beauty salon, Nathalie STILL hasn’t finished hemming her jacket for her mom. Tim Gunn arrives and says that it’s time to head to the runway, Nathalia still is not done. She sticks a few pins in the back of her mom’s jacket and hopes for the best as they rush downstairs.

Heidi Klum and the judges take their seats, including guest judge Olivia Culpo. The designers’ friends and family members strut their stuff down the runway in their new outfits while the judges take notes. After the runway show, Heidi Klum announces that Laurence, Dexter, and Cornelius are safe and can head backstage. The remaining designers on the runway have the highest and lowest scores. One of them will win $25,000, and one of them will be eliminated and sent home from the competition. Roberi made a dress for his best-friend. The judges are impressed with the clashing colors and patterns, they seem to go together perfectly. Heidi raves that Sophie looks beautiful and it is the “perfect dress for her.” Nina agrees that the neckline

After the runway show, Heidi Klum announces that Laurence, Dexter, and Cornelius are safe and can head backstage. The remaining designers on the runway have the highest and lowest scores. One of them will win $25,000, and one of them will be eliminated and sent home from the competition. Roberi made a dress for his best-friend. The judges are impressed with the clashing colors and patterns, they seem to go together perfectly. Heidi raves that Sophie looks beautiful and it is the “perfect dress for her.” Nina agrees that the neckline “suits her beautifully.”

Roberi made a dress for his best-friend. The judges are impressed with the clashing colors and patterns, they seem to go together perfectly. Heidi raves that Sophie looks beautiful and it is the “perfect dress for her.” Nina agrees that the neckline “suits her beautifully.”Erin’s grey coat and

Erin’s grey coat and lacey dress doesn’t impress the judges. Heidi wishes that Erin had gone with a more adult-like design. Erin’s mom jumps to her defense, she loves her daughter’s dress, back hoe in Utah it is hard to find something so fun and colorful.

Rik’s mom’s dress is a hit. Zac loves that he went with a tweed jacket, which is usually associated with the upper-class. Rik’s mom loves her new outfit. Heidi agrees that it looks like it came right out of a department store, and is worth a lot of money.

Heidi Klum announces that Jenni’s mom’s outfit was the worst on the runway. She says that it looks “too juvenile.” And, if she saw Jenni’s mom walking down the street, she wouldn’t be able to take her seriously. Zac agrees that the shirt is “too frumpy.” Nina agrees, if she took her kids to Jenni’s mom’ school, she would be confused as to why she was teaching her children.

The judges rave about Mah-Jing’s mom’s outfit. Nina thinks that it made his mom “look like a bad-ass when she was walking down the runway.” Mah-Jing’s mom was thrilled by her new look, her son gave her exactly what she wanted.

Of course, the judges can tell that Nathalia rushes through her jacket. Heidi says that she is disappointed, Nathalia had two days to finish the project, there is no reason that she should have sent her mom down the runway with pins in her coat. The other judges agree that it is totally unacceptable.

After taking closer looks at everyone’s designs – Heidi Klum and the judges have come to a decision.

The loser of this week’s challenge is Jenni, and she is officially eliminated from Project Runway.