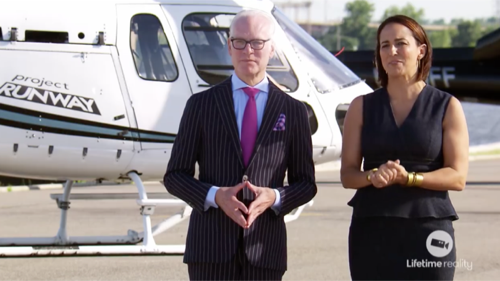 Tonight on Lifetime their Emmy Award nominated series Project Runway airs with an all-new Thursday, November 17, 2016, and we have your Project Runway recap below!  On tonight’s Project Runway season 15 episode 10 “A Power Trip,” as per the Lifetime synopsis, “The clothiers reach new heights when they take a helicopter ride above New York City for inspiration to create high-fashion magazine looks. The guest judges are actress Camilla Belle and editor Anne Fulenwider.”

Did you watch last week’s episode and want to get caught up before tonight?  If you missed it we have a full and detailed recap, right here!

Tonight’s episode of Project Runway kicks off with Tim Gunn surprising the remaining designers with a helicopter ride over New York City. Of course, there is a catch, this isn’t just any helicopter trip. Tim Gunn tells the designers that their next challenge will be an editorial design for today’s modern day “Power Woman.”

The designers take in the sites, and snap photos of aerial shots of the city, the Statue of Liberty, and the crowded streets and traffic jams. When the helicopter lands, the designers rush in to the hangar and begin sketching. Erin is feeling some pressure after being in the bottom two the last two weeks – she feels like this week is her chance to prove herself to the judges.

Laurence wants to do something a little different – she has made her mark in the contest so far with her beautiful leather jackets, this week she decides to switch it up a little bit and make a dress instead.

After they have completed their sketches, Tim Gunn takes the designers to Mood to pick out their fabrics. Dexter decides to take a walk on the wild side and get some black lace. Meanwhile, Cornelius picks up different colors of leather, he is envisioning something with layers.

The designers take their fabric back to the sewing room and get to work. Rik heads to the backroom with his fabric, he decides to do some splatter paint.

Last week Jenni went home, and her BFF Nathalia is lost without her in the sewing room.

Everyone notices that Nathalia doesn’t really know what she is doing without Jenni there to hold her hand. Interestingly, Nathalia turns to Rik for help.

The other designers notice that Erin is putting together something whacky again. She is working with a bizarre peach felt material, and turning it in to a large over-sized coat that hooks together in the front like puzzle pieces.

Cornelius is feeling some pressure this week, he is the only designer left that hasn’t won a challenge yet. Plus, he was eliminated and Tim Gunn saved him, so he feels like he can’t let Tim down.

Tim Gunn arrives for the critiques – Rik shows him the fabric that he is dyeing in the other room. Tim raves about Rik’s work so far, he thinks the fabric is going to be a hit with the judges.

Tim is a little concerned with Mah-Jing’s dress, he chose to use denim and tweed. He warns Mah-Jing that it is nearly impossible to sew those two fabrics together, and if he doesn’t measure his model perfectly, then he could have a major fitting problem.

Laurence shows her dress off to Tim, and he’s shocked to see that she is using a print – she has never used anything besides solid colors in the competition so far. Laurence’s dress also has a handsewn beautiful NYC skyline.

Nathalia’s jumpsuit and rain jacket have Tim Gunn concerned. He warns her that she can’t include “everything and the kitchen sink” and she is trying to include way too many different fabrics. Nathalia realizes that Tim s right, and scraps basically her entire design with only hours left.

Tim gives the harshest critique to Erin. He warns her that her design looks like a milk carton, and pastel pink is a horrible idea and there is nothing powerful about the color. Rik jokes that Erin’s model looks like Patrick from Spongebob.

The models arrive for their fittings, and the designers are in serious trouble – hardly anyone has anything to put on their models. Laurence and Mah-Jing are the only ones that have anything to put on their models. Erin is a hot mess, but her model gives her a pep talk and encourages her to start over from scratch. Erin tosses her creepy pink felt coat in the garbage can.

Time is winding down and Nathalia has a complete breakdown and starts crying in the sewing room because she hates her design and is confident that the judges are going to send her home.

The next morning, the designers have just a few hours to get their models dressed, and get their hair and make-up done at the Sally Beauty salon. Rik is feeling pretty confident about his dress, and has already finished it, so he decides to be a good sport and help Nathalia put the finishing touches on her dress. It’s time for the runway show, the designers and judges take their seats and the models begin parading down the runway in this week’s designs.

It’s time for the runway show, the designers and judges take their seats and the models begin parading down the runway in this week’s designs.

After the runway show, Heidi Klum announces that Laurence and Roberi are safe and they can head backstage. The remaining designers on the runway have the three highest and three lowest scores. One of them will be named the winner, and one of them will be eliminated and sent home.

Mah-Jing’s dress is a sit with the judges. Nina raves that she loves it, and she can tell that he used inspiration from the helicopter ride. Guest judge Camilla Belle agrees that she can tell the model is a total power woman.

Interestingly, Erin’s dress is a hit tonight with the judges. Zac Posen is intrigued by the fabric that Erin used. This week is an editorial challenge, so while the dress might not be something that would sell in stores, it would look great in a magazine.

Rik was confident all day that he had this competition in the bag. But, Zac Posen tears his dress apart. He says that it looks fabulous in the front, but is tragic in the bag. Nina agrees that his model looks like she is wearing an apron.

Heidi praises Cornelius’ dress and says that it was her favorite look tonight, and was a perfect combination of work and fun. Camilla Belle agrees, as does the other judges. Zac Posen points out that Cornelius’s design was very risky, but he pulled it off. Nina is a fan of the contradiction on the dress, the leather colors combined with the polished dress.

Dexter chose to use the shoulder pads that the judges hated a few weeks ago, and they still hate it.

They tear his design apart and clearly aren’t impressed. Dexter argues that there are other designers that do the same thing every week, and they don’t have a problem with that. Things get awkward and Heidi dismisses them from the runway so the judges can discuss this week’s challenge.

After careful consideration and closer looks at the designs, Heidi Klum calls the designers back out on the stage. The winner of this week’s challenge is Cornelius. Nathalia, Cornelius, and Rik are in the bottom three. Heidi announces that Nathalia is officially eliminated from Project Runway.

Heidi surprises everyone and announces that this week is a double elimination week, and Dexter is eliminated too.