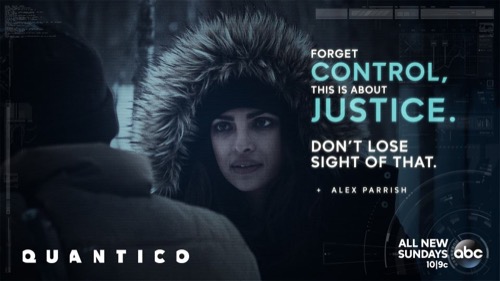 Tonight on ABC Quantico airs with an all new Sunday March 20, season 1 episode 14 called, “Answer” and we have your weekly recap below. On tonight’s episode at Quantico, the recruits take defensive driving lessons; and tensions between Liam (Josh Hopkins) and Drew (Lenny Platt) explode.

On the last episode, the trainees learned how to source information from confidential informants and then had their newfound skills tested in the real world. In the future, meanwhile, Alex and another agent face a life-or-death situation that forced them to share classified information. Did you watch the last episode? If you missed it we have a full and detailed recap, right here for you.

On tonight’s episode as per the ABC synopsis, “at Quantico, the recruits take defensive driving lessons; and tensions between Liam and Drew explode. In the future, Simon faces a new reality in the aftermath of what’s occurred.”

Tonight’s season 1 episode 14 looks like it is going to be awesome so make sure that you tune in to our live coverage of Quantico at 10:00 PM EST!

Back at Quantico, Alex and her friends had been taught by the best. They had defensive driving lessons and they were frequently given assignments to test their instincts as well as their resolve if there were to go out in the field. Yet, in spite of everything she had been taught, there was mastermind on the loose that was seemingly willing to break Alex just for their amusement and they were doing a pretty good job on tonight’s all new episode.

Alex was a complete mess following Natalie’s death. Apparently she had forgotten everything she had been taught about expectations and therefore had gotten her hopes up last week when Natalie had come up with a plan to catch the mastermind. And unfortunately not only did this plan fail, but it also resulted in Natalie’s death.

So Alex had blamed herself for what happened. She wondered where she had gone wrong with their investigation and what else she could have possibly have done to save Natalie’s life. Though the biggest problem that Alex had with Natalie’s death was that she was the only person that knew about it seeing as someone had supposedly sent an email to the director claiming to be her and this person had put in a request for emergency time off.

And therefore there wasn’t anyone looking for Natalie much less on anyone trying to recover her body. Yet, the one thing that was suspicious was the fact that Alex had also taken the day off without any kind of forewarning. So Ryan had tracked her phone back to Holland, Vermont. Which he found unusual because as far as he knew Alex and Simon hadn’t exactly been on speaking terms.

But Alex had gone to Simon’s because he was the one person she knew she could trust. Alex, you see, had nearly told Ryan about Natalie however someone had been watching her and they had threatened Ryan’s life if she told. So the one person that Alex knew who would willing go back to the FBI even if it meant their death was Simon. The same Simon that always had a strong sense of justice and who Alex knew wouldn’t turn his back on her.

Not to say that Simon didn’t at least try, he did. He also pulled a gun on Alex as a way to scare her off so that he could finally stay under the radar. Yet Simon hadn’t fought with Alex or threatened her because he didn’t believe her. He had done those things because he too had been left broken by the mastermind.

He had lost friends and had his own life had been threatened. And eventually those things were going to wear down on his psyche to the point where he didn’t even know if he could pick up a gun again.

So Alex was at impasse with him for the longest when Nimah and Ryan showed up. The other two had been concerned when they saw that Alex had gone to seek Simon out and so Nimah had offered to drive Alex back town while Ryan stayed behind to check on Simon. Although, on the drive back, Alex began to think of her training days at Quantico and suddenly she remembered what happened to Drew. Drew being a young man that she had befriend and who she had led down a dangerous path.

Drew it seems had wanted to join the FBI because he had lost his pregnant fiancée during a shoot-out that was to be between the cops and couple of radicalized militia. Yet it turns out that Liam had armed the militia with those weapons and he had told Alex about it by mistake. She had gone to him after she and her team were having problems with an exercise and so that’s when he had told her his story. He had wanted to offer up an example of when he too had once underestimated a suspect. And she had then told Drew because she hadn’t connected the dots.

Only he had so he had later openly accused Liam of getting people killed and that landed in Drew getting thrown out of training and Liam then getting benched by Miranda.

And so Alex has gotten people she’s cared about into trouble. However, she never means it. She just acts without thinking sometimes and that has resulted in the same blindspot that everyone keeps telling her about.

But Simon had gone to Alex’s apartment after everything.

He had offered Alex his help and surprisingly he even had a plan.