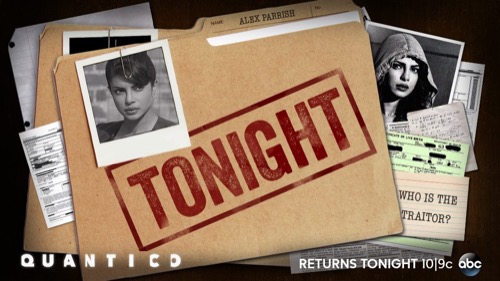 Tonight on ABC Quantico airs with an all new Sunday March 6, season 1 spring premiere called, “Alex” and we have your weekly recap below. On tonight’s episode Alex testfies at a congressional hearing about the terrorist bombings. In other events, a new group of recruits joins Alex and her classmates at Quantico.

On the last episode, the terrorists responsible for the bombing of Grand Central Station finally revealed themselves, but instead of answers, more questions remain. While back at Quantico, the recruited received a well-deserved few days off for the holidays, but not everyone was oh so merry when secrets were revealed and lines and blurred. Did you watch the last episode? If you missed it we have a full and detailed recap, right here for you.

On tonight’s episode as per the ABC synopsis, “Alex finds herself in the middle of a congressional hearing to testify about the terrorist bombings. Convinced Elias didn’t act alone, she is determined to find answers and the truth. While back at Quantico, a new group of NATS join Alex and her classmates, causing tension and competition between the groups of trainees.”

Tonight’s season 1 episode 12 looks like it is going to be awesome so make sure that you tune in to our live coverage of Quantico at 10:00 PM EST!

Alex Parrish was again making claims that apparently no one was willing to believe on tonight’s all new episode of “Quantico”.

Following the attack on the FBI Emergency Command Center, Alex had told all who would listen that Elias Harper hadn’t been the true mastermind behind the attacks and seeing as she had in fact been in a room with him moments before he took his own life – many had taken her at her word when she said Elias had been manipulated by a third party. But then some time had passed and there was simply nothing for anyone to find. No paper trail or even a known affiliate of Elias’s.

So ultimately the bureau chose to take the easier option. They said the reason they haven’t found anything in the three months since thirty-nine of their own agents were murdered is because there was nothing to find. And Elias Harper acted alone.

But Alex didn’t believe that and her need to argue the point, even in front a congressional hearing, meant a lot of people were forced to drop her for their own good.

The FBI had to put her on leave because she refused to be less vocal about what happened. And although they couldn’t outright fire her with the world scrutinizing everything they did, her friends were an altogether different matter.

Alex’s friends had tried to defend her in the beginning and all that got was an even harsher light trained on them. What with Natalie nearly losing her job because she had defended Alex and had also been part of an investigation into Elias’s whereabouts before he died, but ultimately she didn’t find anything either. And Shelby got the worse of it.

Her affair with Caleb’s father was thrown in her face right by public opinion and the paparazzi. And it didn’t help that Calvin Haas’s widow just happened to be a vice-presidential nominee. So Shelby ended up having to move back to Georgia for a while and she was only back at the bureau now because she had denounced Alex.

So, after everything that has happened, Alex was left without friends or allies and personally had Claire Haas gunning for her. Claire apparently blamed Alex for delaying the closing of the case and she had taken her grievances to the media. Who were naturally on her side because they could sell things from the grieving widow’s point of view.

Yet Alex managed to stick to her guns despite what was being written about her and her friends all abandoning her, but the one person she couldn’t ignore was Ryan. Ryan had told her that she was being selfish by only seeing her side in all of this and so she later did what she thought he wanted her to do. She went in front of the congressional hearing and said that she couldn’t find any evidence that contradicted the bureau findings.

And then she said that it was time for the city as well as the country to move. However, she didn’t say that she had stopped believing Elias hadn’t been behind everything. She simply said that there was no evidence to prove it.

So Alex’s changed testimony had gotten her reinstated at the bureau, but she was still friendless. Ryan had been upset with her for her turn of phrase and the others had still been angry because the investigation she hadn’t been able to contradict had been theirs. Therefore, the only thing that changed for the better was that Alex got to go back to work.

But sadly still wanted to use her. Alex had later been contacted by the person claiming to have known her at Quantico and this person said that they still had work to do because she was now going to become a terrorist whether she liked it or not. And to make sure Alex complied – a bomb had been strapped to Natalie.