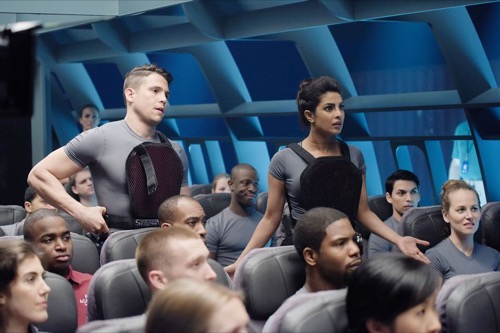 Tonight on ABC Quantico airs with an all new Sunday April 3, season 1 episode 16 called, “Clue” and we have your weekly recap below. On tonight’s episode the trainees are given a difficult exercise that hits too close to home for Shelby; (Johanna Braddy) and, in the future, Alex (Priyanka Chopra)  finds an unlikely ally in Hannah. (Eliza Coupe)

On the last episode, Miranda and Liam paid a deadly price when a terror cell tried to infiltrate Quantico. In the future, Alex received instructions; and Claire Haas’ life was endangered. Did you watch the last episode? If you missed it we have a full and detailed recap, right here for you.

On tonight’s episode as per the ABC synopsis, “at Quantico, the NATS are given a training exercise that hits too close to home for Shelby. While in the future, Alex finds an unlikely ally in Hannah, as she continues to try and stop the terrorist from striking again.”

Tonight’s season 1 episode 16 looks like it is going to be awesome so make sure that you tune in to our live coverage of Quantico at 10:00 PM EST!

Alex had gone to Hannah Wyland for help on last week’s episode of “Quantico”. Although it seems that neither she nor Simon could foresee the consequences of receiving just that.

It had initially taken Hannah some time to comprehend everything she had heard, but the pieces did slowly begin to fall into place after she had done as Alex suggested and had tried to find Natalie or at the very most chase the email that Natalie had supposedly sent in to explain her sudden absence. However, Natalie couldn’t be found and so the only conclusion there was left to draw was to consider what else Alex had said. Which was Natalie being dead and has been dead for a while.

So once Hannah had realized this, she then went over to Alex’s place and demanded she explained everything that had happened. Starting from the point she had lied at a congressional hearing and ending why Alex had dragged Hannah into her mess of an investigation. Apparently, all Hannah could see were the flaws in the many things that Alex has done since she found out “the Voice” was in fact real.

Alex and Simon have taken to calling the mastermind “the Voice” yet Hannah didn’t care much for the nicknames. What she cared about is that the person they were calling “the Voice” had explicitly told Alex that he was going to hurt if not ruin any person she tried to confide in about him. Yet, Alex had decided to take a risk with her own life as well as both Hannah and Simon’s. And so it was safe to say she was angry with Alex for just doing whatever she wanted without thinking about the consequences.

But, despite her anger and what she thought was Alex being her general self, Hannah did agree to help Alex and Simon. So they told her about the prescription they had switched out and how they had verified it as nothing life-threatening because the pills were only ever going to up Claire’s body pressure. Which in all honesty didn’t seem or sound as if it could be dangerous. That is if it had been the pills alone.

Only Hannah had dared “the Voice” into revealing more of his plan. Hannah had apparently been on Claire’s security detail and so it had been her job to assess impending threats. And with Simon and Alex constantly in her ear, she had unfortunately become paranoid on the job and tackled a freshmen reporter whose face hadn’t been recognized on their facial scanner.

So Hannah had gotten taken to task for that, but Miranda hadn’t pulled her from duty. She simply gave the other a woman a warning and told her that she gets that because she previously had an impeccable record. Though, that first strike with the journalist had pushed Hannah into calling the number that Alex still had on her and telling whoever was on the other end that she was now in charge.

Which “the Voice” found to be amusing. He told her that he was watching them at that very moment meaning he was on the FBI’s most secured floor and, after he managed to scare Hannah into accepting who was really in charge, he told both women what their next task was going to be because Alex had broken his rule about outsiders. And again their task had appeared to be too easy.

The ladies were going to be given a chip. A chip that they had to place under the chair at Claire’s venue and so the ladies had run the chip passed Simon. However, he hadn’t found anything amiss. There had been no anthrax or nuclear launch codes hidden inside. So the ladies had once again felt safe with following “the Voice’s” instructions.

Only Alex had gotten caught.

Ryan had seen her put something under a chair and therefore he had confronted her about what she was really up to. But Hannah had managed to divert him. She told him that the Senator was looking for him seeing as she was about to go up on stage and she had seemingly agreed to follow up with Alex. And find out what was going yet that very same conversation between all three would go on to look suspicious considering what later happened.

Apparently Simon hadn’t been finish with looking into the chip so he hadn’t found out what it did until it had been too late. Simon it seems had realized that the chip was actual a component. A component that was literally capable of knocking out the power nearby. So he had called the ladies to warn them about it, but the chip had been gone by time they looked.

And there had been a much bigger problem to contend with. Hannah had realized that without lighter, there should be concerned about an assassination attempt on the senator. Though when Alex had pointed out that the shooter wouldn’t be able to find Claire in the dark, Hannah had reminded her about the pills.

The same pills that increased the Senator’s body temperature and that would make it easier on a sniper to find her with thermal imaging.

So that’s when the ladies acted. They had been desperate and the only thing that Hannah could think about in order to stop an impending disaster was to shoot off her gun in the crowded theatre. Thereby sending everyone running. Including Claire’s security detail that naturally wanted to rush the senator out of there.

Although, a seasoned agent accidentally firing their gun didn’t seem plausible. At least not to Hannah’s bosses. So Hannah was eventually suspended for what she did, but she told Alex that she wasn’t upset. Hannah had said that she realized she couldn’t take on “the Voice”. She had tried and it had backfired.

And yet Hannah thought that Alex had a chance. Hannah told her that she had been right from the very beginning and that she had been the only person to see it. Therefore, Hannah wasn’t going to get in the way.

She wasn’t going to tell command and she asked Alex not to tell Ryan. But Hannah wanted Alex to keep looking into “the Voice” and find them before someone else gets hurt yet that was sort of hard to do with Ryan following her everywhere. Ryan had been told the same story as everyone else about Hannah accidentally shooting her gun, but he ended up distorting what happen and thought Alex had framed Hannah because they had been on to her back at the theater.

So that’s why Ryan later tracked down Alex and told her that he was going to find out what she was hiding. With the additional promise that he was never going to give up until he does. And while that Ryan was directly placing himself in the way, there had still been a reason to celebrate and even believe that all of this might soon be over.

On the same night that Hannah and Alex thought there was going to be an assassination attempt on Claire Haas, there had been a break-in in the same building and so both Simon and Alex had remembered Myranda’s lesson. She used to tell them before her suspension (her son had used her position to target headquarters last week), that there was no such thing as coincidence. And it did seem weird that “the Voice” hadn’t been upset about Claire making it out of the building.

Yet it was revealed on tonight’s episode that Caleb and his fellow trainee Will had become involved with an investigation that Caleb’s father was secretly running. So maybe it hadn’t been so strange for Caleb to be seen entering FBI’s command headquarters a day before the bombing. Maybe it had something to do with the radical group he and Will were looking into and that Will had appeared to be too keen on joining.