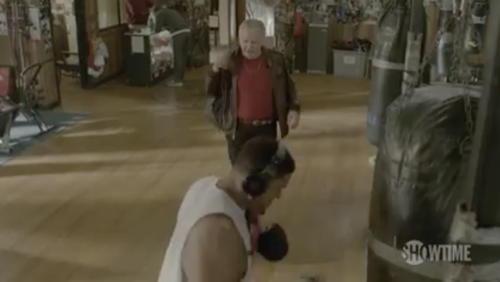 Tonight on Showtime the highly entertaining show Ray Donovan returns with an all new Sunday, July 17, season 4 episode 4 called “Federal Boobie Inspector” and we have your weekly Ray Donovan recap below. On tonight’s episode, Ray (Liev Schreiber) visits a Hollywood power player in an attempt to get the Russian mob off his back and unearths a secret Ezra shared in the past.

On the last episode, an intruder broke into the Donovan household; Mickey plotted a casino heist; Bridget celebrated her 18th birthday and struggled to maintain her independence.

On tonight’s episode as per the Showtime synopsis, “Ray visits a Hollywood power player in an attempt to get the Russian mob off his back and unearths a secret Ezra shared in the past. Meanwhile, Lena and an ex-girlfriend take Abby out on the town to help her confront fears over a recent health diagnosis; and Mickey offers his boys a job prospect and tries to assimilate back into the family.”

Tonight’s episode of Ray Donovan kicks off with Hector Campos having sex with his sister Marisol…Ray stops by the office and checks in on Lena, she’s still watching surveillance tapes of the district attorney, hoping that he will slip up and do something that they can use against them. Lena whines that it is pointless, Ray tells her to keep watching.

Ray stops by the office and checks in on Lena, she’s still watching surveillance tapes of the district attorney, hoping that he will slip up and do something that they can use against them. Lena whines that it is pointless, Ray tells her to keep watching. Ray heads home and Abby is sitting up

Ray heads home and Abby is sitting up chain smoking and drinking wine. He wants her to go to the breast cancer treatment. Abby tells him that she has made her decision and she isn’t doing it, she argues that it’s just stage zero and there is nothing wrong with her. She thinks that the doctors are just scamming them for money.

Abby heads to bed and Ray takes the dog out for a late night walk. He meets up with one of Sonia’s men and hands them over a bag.

The next day Ray and Abby head to the gym to meet Bunch and Theresa’s baby. Bunch says that he wants Ray and Abby to be the godparents, Theresa is obviously not thrilled by the idea and she storms off. Meanwhile, Ray seems mesmerized by the baby and oblivious to the drama around him.

Mickey is trying to get home so that he can meet his new granddaughter, he hitches a ride with an older woman. She’s a bit eccentric and sings gospel music as they drive down the highway.

Ray leaves the gym and gets a phone call from Harriet, she tells him that there is no way that she can get him the cash that he wanted that quickly. Ray doesn’t want to hear it, he tells her to make it happen. Ray heads to Debs house, she’s surprised to see him, and even more surprised to learn that there is a safe hidden in the closet. Ray opens it up and takes out several envelopes.

At the gym, Terry is upset, he wanted to be the baby’s godfather. Bunch tries to tell him that it is a big responsibility. Terry knows they didn’t choose him because he has Parkinson’s disease.

Lena shows up on Abby’s doorstep, she brought along a friend of her’s to meet Abby. Her name is Gina, and apparently, she is a cancer doctor. When Abby realizes that Ray sent them over, she tells Lena to “F–k off” and slams the door in their faces.

Mickey shows up at the gym and says he came to meet his granddaughter. He harasses Daryll and tells him that he has a job for him, he offers Daryll $100,000 but Daryll isn’t buying it. After Mickey leaves, Daryll calls Ray and tells him his dad is stirring up trouble and he’s back and is trying to get a team together to rob the casino.

Meanwhile in the backroom at the gym, Theresa and Bunch are fighting. Theresa is furious that he asked Ray to be their daughter’s godfather without asking her. Bunch doesn’t see the problem, “They’re family.” Theresa shouts that her baby isn’t going to live in a house where people get shot. Then, she announces that she is moving back home to Bakersfield.Ray takes the envelope from Ezra’s safe and heads to meet up with a man named Price. Apparently Price killed someone, and Ezra helped him cover it up, and the proof is on the tape. Ray tries to use the tape as leverage, he wants Price to get the district attorney that Lena has been watching to drop the charges against Belikov so that he can get Sonia off his back.

Ray takes the envelope from Ezra’s safe and heads to meet up with a man named Price. Apparently Price killed someone, and Ezra helped him cover it up, and the proof is on the tape. Ray tries to use the tape as leverage, he wants Price to get the district attorney that Lena has been watching to drop the charges against Belikov so that he can get Sonia off his back.

After his meeting with Price, Ray checks in on Hector Campos, Hector has been a hot mess since he lost his big fight. Not only is he having sex with Marisol again, but he has a serious drug problem. Ray finds Hector overdosing on the floor, he arrived in the nick of time and is able to save the pro boxer.

Avi and Ray sit down at the surveillance cameras to watch District Attorney Holt. It looks like Ray’s scheme may be working, Price arrives at Holt’s house and informs him that he needs him to drop the charges against Belikov. Apparently, Price is an important guy and Holt is all ears. Then Ray’s plan goes South, and instead of forcing Holt to drop the charges, Price confesses to the murder that Ray was using as leverage.

Meanwhile, Abby heads out for a wild night with Lena and Gina. After a ton of booze, Abby seems to be loosening up to her new gal pals, and she seems to be leaning towards actually getting the treatment after making out with Gina and checking out her fake breasts. Is that what Ray had in mind when he asked Lena for help? Getting his wife drunk, and having her make out with a woman? Regardless, they seem to be making progress.

Now that his blackmail scheme has gone out the window, Ray heads to a shady bar and meets up with agent Cochran. He explains his predicament to Cochran, and that he needs something to use to bribe DA Holt. Cochran sells him a file for a cool $2 Million that is supposed to help convince Holt to set Belikov free. There’s more though, Cochran refuses to seal the deal until Ray Donovan sings for him. Let’s just say….we have finally found something that Ray is not good at. It’s awkward to say the least …

Tonight’s episode of Ray Donovan ends with Ray making what is certain to be a horrible decision. Ray meets up with his crazy father Mickey, and tells him that he is going to help him rob the casino. Between Sonia demanding cash, and the $2 Million that Ray spent on the file for Holt, he needs some fast cash. And, this is certain to be a disaster…