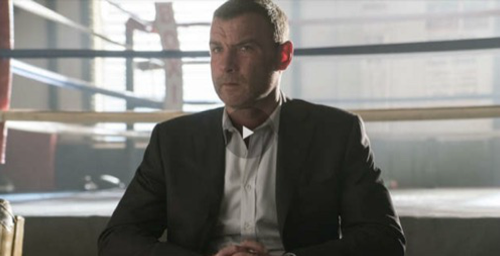 ‘Ray Donovan’ season 4 episode 1 spoilers and recap include Terry Donovan’s [Eddie Marsan] survival of the shooting at Mickey Donovan’s [Jon Voight] apartment complex. Ray [Liev Schreiber] was spirited off by to a secret location by Father Romero [Leland Orser] after being shot by the Armenian Mafia.

As Ray fully awakens Father Romero introduces him to his caretaker, a boxer named Hector Campos [Ismael Crus Cordova]. Hector was also sexually abused by a priest as a child and he helps Ray get clean and sober. We later find out that Hector has a deep dark secret he shares with his half-sister Marisol [Lisa Bonet].

Ray returns to Los Angeles with Hector and begins attending Bunchy Donovan’s [Dash Mihok] support meetings at Fite Club. As Ray seeks to find redemption he’ll be drawn back into the underworld, this time playing a more dangerous game. Ray will be manipulated and used by Sonia Kovitky [Embeth Davidtz] a wealthy art curator.

Mickey Donovan [Jon Voight] is still on the run, but this time he has added yet another layer of crime to his already long list of transgressions. He plans to exploit a local casino owner – Little Bill Primm [Ted Levine].

The plan backfires when Little Bill discovers Mickey, who is working as a bartender at the casino, used the name and social security number of a teenage boy who died in the 1950s in order to get the job. Mickey is promptly fired and told never to return to the casino.

After partaking in some peyote with a Native American friend Mickey experiences hallucinations of his dead daughter Bridget when she was a child. Mickey chases the hallucination through Little Bill’s casino and is caught yet again.

‘Ray Donovan’ season 4 episode 1 spoilers find Abby Donovan Patricia Malcomson] struggling with her own demons. On the day Ray is able to convince Bridget Donovan [Kerris Dorsey] to return home for just one night for a family dinner Abby discovers she has breast cancer.

This is the same day Terry discovers that the church will not allow him to be a missionary in Brazil and that Ray is called in to clean up a mess Hector has caused involving Hector and Marisol.

When Ray finally arrives home for the family dinner and discovers a warning has arrived from Sophia Kovitky. She has sent the painting ‘Girl with Guitar’ as a present to Bridget. A warning that Ray must cooperate or the Armenian Mafia will destroy his entire family.

Abby does not share her breast cancer diagnosis with Ray. The news has her questioning her role as a wife and a mother. All Abby asks of Ray is assurance that everything will get better. But things aren’t going to get better despite Ray’s promises.