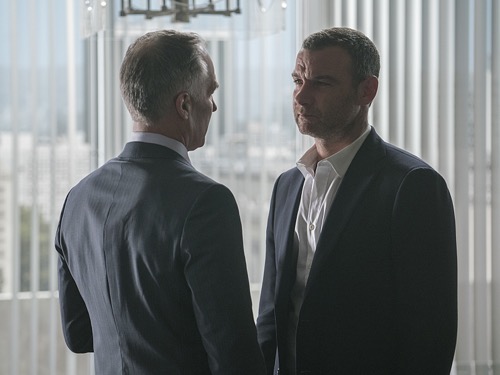 ‘Ray Donovan’ spoilers for season 4, episode 8, ‘The Texan,’ reveal that Ray [Liev Schreiber] discovers that Conor Donovan {Devon Bagby] broke into the lockbox and took a gun. Ray confronts Conor who denies everything and Ray attacks his son demanding to know where Conor hid the firearm.

Terry Donovan [Eddie Marsan] begs Ray for help in getting Hector Campos [Ismael Cruz Cordova] head in the right place. “I don’t know what the hell went down with you and Hector, but if you can help him you might just help me too,” Terry pleads.

It might be too late to save Hector. ‘Ray Donovan’ spoilers for season 4 episode 8 reveal that a furious Marisol [Lisa Bonet] betrays her half-brother by giving an interview about their drug abuse and incest on national television. “I’m here to ask my brother to admit the truth,” the junkie cries to the interviewer. Of course, this will be Marisol’s version of the truth.

Daryll Donovan [Pooch Hall], desperate to be accepted by his half-brothers, is enlisted by Ray for a dangerous mission. ‘Ray Donovan’ spoilers indicate Ray will ask Daryll to work with Lena [Katherine Moening] in order to broker a rematch between Hector and Whittaker. “I’m in. Whatever you need man, I can do,” Daryll assures Ray.

Abby Donovan [Paula Malcomson] is dealing with the difficult decision of which treatment to choose for breast cancer. Bunchy Donovan [Dash Mihok] has saddled Abby with caring for his baby daughter Maria. If that weren’t enough, Abby will now be forced to mediate between Ray and Conor as father and son face off over the stolen gun.

Mickey Donovan [Jon Voight] has been moved to the protective wing at the jail after claiming he is gay. But is that the end of the Armenians’ attempts to take Mickey out? If Mrs. Minassian [Grace Zabriski] wants Mickey dead for murdering her sons the Mrs. Minassian will find a way no matter where Mickey tries to hide.

Now that another one of the late Ezra Goldman’s [Elliott Gould] secrets has been exposed how will Ray deal with ‘The Texan’ [Stacy Keach]? Ed Cochran [Hank Azaria] shot ‘The Texan’ but if the final scenes of season 4, episode 7 are any indication, ‘The Texan’ didn’t die.