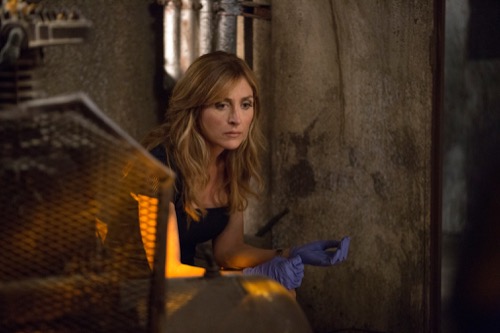 Tonight on TNT RIZZOLI & ISLES returns with an all new Tuesday, February 23 season 6 episode 15 called, “Scared to Death” and we have your weekly recap and spoilers below. On tonight’s episode, a woman is murdered in a grisly scene reminiscent of a horror film.

On the last episode, a robbery was foiled by a security guard, who ended up wounded when killing one of the thieves. Puzzling questions emerge, however, when Jane and Maura searched for the robber’s accomplice. Elsewhere, Jane continued her efforts to protect Maura and Angela. Did you watch the last episode? If you missed it, we have a full and detailed recap right here for you.

On tonight’s episode per the TNT Synopsis “a woman is murdered in a grisly scene reminiscent of a horror film, prompting the team to investigate a chilling game in which players pay to experience sheer terror.”

Angela did something she shouldn’t have on tonight’s all new episode of “Rizzoli & Isles”. Apparently she went snooping through Vince’s desk one day and she found an engagement ring hidden in the corner. So naturally she showed the ring to her daughter Jane and her surrogate daughter Maura, but the truly bad thing that she did was when she tried on the ring. And got it stuck on her finger.

Now the girls were sympathetic and, when they weren’t laughing, they genuinely wanted to help. Yet, both ladies received a call from work about a body found in an old abandoned warehouse and so they had to leave Angela to figure out things on her own. While they got to work in trying to identifying their perp. Which turned out to be a challenge.

The victim had been found in a place frequented by the homeless so it was a mess for Maura. What with there being DNA all over the place although none of the DNA that Maura collected had been found in the system. So all she could eventually get from her autopsy and analysis was that the victim, Daniella Gibbs, had fought with a man and had seemingly helped a woman remove a blind fold.

And frankly that wasn’t much. Jane and Vince had done some leg work and they found out that the building had also been used to host “events” for this thing called Fear Club. Where people pay a hundred bucks to be frightened out of their minds.

So the detectives’ working theory had been that their victim had walked in on a scene she thought was real and that her death might have been accident. And this theory of theirs definitely seemed plausible once Maura realized their victim had been killed by something plastic. Like possibly a prop.

However, it didn’t explain why no one had reported Daniela missing because that’s usually what happens after someone’s been dead for a few days. As well as there being a witness like that person in the blindfold. So Jane chose to follow that angle while her baby brother reached out to the Fear Club. And somehow got himself inside.

And, well, Fear Club did get a few screams out of Frankie. But the fact he had his badge and was able to demand answers to his questions had helped him overcome the hanging pig corpses. And simply get down to business.

Though, speaking of business, Vince knew that he wouldn’t be able to get a thing done much less keep an entire investigation into Jane’s hacker away from Jane’s prying fingers if he were the one doing things. So he asked Nina to step in. And Nina eventually found a guy that she thought was good for the hack.

Riley Keating had apparently hacked into another woman’s life where he ruined her credit as well as her relationship with many of her friends. And the young woman he destroyed had tried to go to the police. But no one had believed her story because they didn’t think Riley could have done all those things.

So Nina took Riley’s case file to Vince and together they arrested him. Elsewhere, however, both Jane and Frankie were able to make headways into Daniella’s murder. Daniella, you see, had actually been a part of Fear Club and she had even helped run it with a friends of hers. Who hadn’t reported her missing because he thought she had gone off on another bender and had figured she would show up once she got clean again.

But, Daniella’s death hadn’t been accidental. She had walked in on scene that hadn’t been sanctioned by the club so that’s probably when she realized someone had hijacked the “experience” to carry something else. And stepped in. Even at the cost of her life.

So because the guy who runs the thing had been her friend, the detectives ended up receiving all of Fear Club’s files and that’s how they found the woman in the blindfold.

Her name was Karen Hughes and it seems she had a stranding restraining order against a man she used to work with. As it turns out Karen was a director of a preschool and she fired Gus Brooks after he had lied about his name and had used his brother’ social security number in order get a job at the school. Though, rather understand where she was coming from, Gus had then started showing up outside of the building and yelling obscene things at her.

Only Gus was later forced to attend court mandated anger therapy which was in Philadelphia. So it didn’t look like he would come back to Boston just to get his chance at revenger. Yet someone did access Karen’s computer at the school and had printed out their invitation to Fear Club.

Therefore, Jane hadn’t wanted to write Gus off too quickly and that proved to be a good thing. Gus had apparently made additional keys to the school with the 3D printer there and he had also used the printer to print himself a blade. Meaning Gus had completely faked his new leaf in therapy and Jane managed to catch him before he could hurt Karen for firing him.

But that hadn’t been the only case that was closed. Nina found out that Riley had hacked Jane, though he had been paid to do it and hadn’t known his boss’s main intentions with Jane. So that was a ‘one door closed, another opened’ type of situation. And Vince is still looking for everyone that had a part to play in nearly destroying both Jane and Maura’s life.

Although, in happier news, Angela did get the ring off her finger so Vince was allowed to propose to Kiki and she accepted.