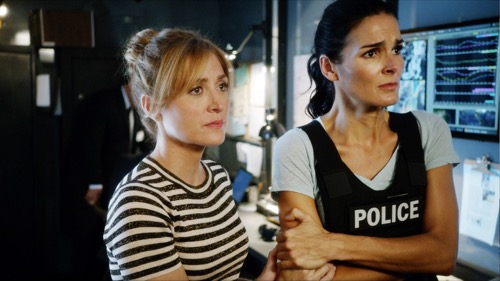 Tonight on TNT RIZZOLI & ISLES returns with an all new Tuesday, March 8 season 6 episode 17 called, “Bomb Voyage” and we have your weekly recap and spoilers below. On tonight’s episode, the team scrambles to crack a murder case with explosive consequences.

On the last episode, a gun battle raged in a usually quiet neighborhood, leaving one dead and leading Jane and Maura into the shadowy realm of an Eastern European gang. Meanwhile, Maura developed a fever, with Angela and Kent’s home remedies having an unexpected effect. Did you watch the last episode? If you missed it, we have a full and detailed recap right here for you.

On tonight’s episode per the TNT Synopsis “the team scrambles to crack a murder case with explosive consequences. Meanwhile, Angela resists Ron’s offer to take her on a romantic getaway.”

Jane and Maura literally had to hike up a hill in order to their latest body on tonight’s all new episode of “Rizzoli and Isles”.

Apparently a habitual hiker had overheard what sounded like a bomb out in the woods and therefore they were in the middle of calling Boston PD to report the noise when suddenly they realized there was much bigger issue than someone possibly playing with explosives. In fact, they found a thumb and figured that whoever the thumb belonged to had probably been close enough to the explosion to suffer even worse damage than merely the loss of a finger. So Boston PD did send out a search team because of that 911 call and they eventually found the victim. A young man that unfortunately died from Traumatic Limb Loss.

Only, by time Jane and Maura had made it up that hill, the police still couldn’t find the bomb and their victim wasn’t not the silly kid they were all expecting. He was young yes, but he was also dressed in sweatpants and carrying out a thermos. Almost as if he was exercising in the woods and not messing around with things he couldn’t control.

So Korsak took a walk around the area to see what he could decipher about the victim that wasn’t making sense and he came across several pieces of animal. Like they too had been blown up. And that’s when it hit him. Or in this case when he stepped on it.

Korsak told his fellow officers in the area to stop moving because they were all in a minefield. Korsak himself had stepped on detonator though luckily everyone else seemed to be fine. Therefore, they were all soon cleared to leave by the bomb squad and Korsak made sure to wait until Jane had left as well before he admitted to activating the bomb directly under his foot.

Although, the bomb squad didn’t respect Korsak’s right to discretion. They soon told Jane about Korsak’s condition and, when she asked them what they were going to do, they then had to pass on the news that they hadn’t figured that part out yet. So that made Jane more determined than ever to stay behind and be there for her friend.

And she left the actual investigation to everyone else. But Boston PD did find out who they were victim was and why he had been targeted by a minefield no less.

The police department along with Maura’s help were able to prove that their victim was John Franklin. John it seemed was a humanitarian that had purposely worked with organizations around the world to clear away minefields. Thus it was just coincidence his workout place suddenly became one. Someone must have targeted him with the one thing he’s always tried to fight.

Yet, Maura later left the lab in order to be there for Korsak and Jane. Maura had apparently called in a lot of favors and got the Advanced Materiel Research Center to donate some of Goethite. Goethite was the strongest materiel found on earth and, thanks to Maura, the bomb squad were able to use it in their plan to save Korsak’s life.

The bomb that Korsak was standing on was motion activated and that meant it was going to off the second Korsak was moved to a safer location. Though, with the Goethite’s help, it was actually easier to move Korsak because there was going to be a shied over the bomb that would minimize the damage. So the bomb squad later cleared the field and then they yanked Korsak into safety.

And Korsak was fine. He was a bit shaken by his experience and he couldn’t wait to see his fiancée once it was all over, but he knew he had to finish working the case first. Thus he ended up downplaying what happened to him to Kiki and she ultimately had to confront him at work about lying to her because she had sensed that he had.

So that’s when Korsak told her what happened and he added that such risks were part of the job. However, Kiki needed time seeing as she didn’t know if she could handle that part of the job and so she told him the most dreaded words in the human vocabulary. She said she needed time.

Though, time was not what Angela herself needed when her boyfriend asked her to go to Paris with him.

Ron had an upcoming medical conference in Paris and so he asked Angela to go with him by asking if her passport was up to date. But Angela at first tried to be sensible. She tried to tell herself that maybe Ron was merely joking with her and that he hadn’t meant it with the passport thing. So Kiki had advised her to stop thinking and she just make a choice. And Angela chose Paris.

And in regards to the case, it ended up being the first person that the police talked to that had been the one they were actually looking for. Unfortunately, John’s partner Walter Park had only pretended to be concerned about someone using a landmine to target his friend yet he soon tried to profit from his supposed friend’s death. By continuing to write himself big checks as the Co-Founder of a non-profit.

So the police picked Walter up at his annual fireworks barbeque at his New Hampshire oceanfront and they stopped him from fleeing on one of his boats.

But while they had captured Walter, it was another felon that had escaped underneath their noses. Nina and Korsak had continued their investigation into the people that targeted Jane and thereby Maura. And they found out that a woman Jane had gone to the academy with was also involved with every prisoner in the investigation as well as being released three days ago.

So whatever this woman believes Jane did to her, she now has the means to exact revenge for it in person.