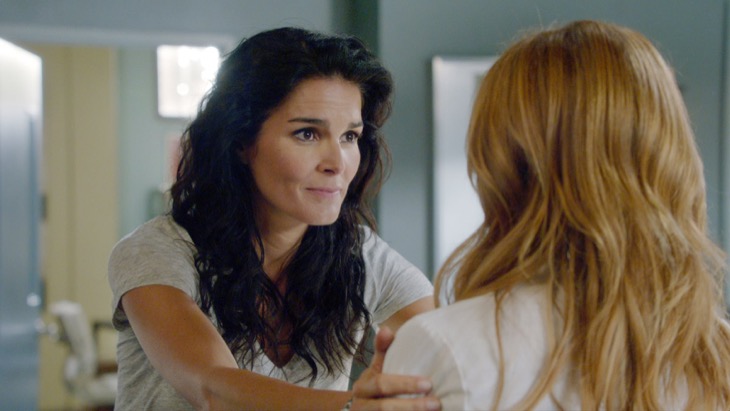 Tonight on TNT RIZZOLI & ISLES returns with an all new Tuesday, March 1 season 6 episode 16 called, “East Meets West” and we have your weekly recap and spoilers below. On tonight’s episode, a gun battle rages in a usually quiet neighbourhood, leaving one dead and leading Jane (Angie Harmon) and Maura (Sasha Alexander) into the shadowy realm of an Eastern European gang.

On the last episode, a woman was murdered in a grisly scene reminiscent of a horror film, prompting the team to investigate a chilling game in which players paid to experience sheer terror. Did you watch the last episode? If you missed it, we have a full and detailed recap right here for you.

On tonight’s episode per the TNT Synopsis “a gun battle rages in a usually quiet neighborhood, leaving one dead and leading Jane and Maura into the shadowy realm of an Eastern European gang. Meanwhile, Maura develops a fever, with Angela and Kent’s home remedies having an unexpected effect.”

The thing about shootings is that there could be a hundred witnesses at the crime and not a single person would claim they saw anything.

And unfortunately that’s what happened on tonight’s all new episode of “Rizzoli & Isles”. No one wanted to provide information on the John Doe found shot in the middle of the street though they were willing to point out that the so called victim had been the aggressor in the gun battle that ended with his death. So Jane and Kosack were forced to rely on the forensics with this one.

They knew how their victim died and they had a crime scene. Yet what they lacked was a name for the victim who hadn’t registered with any of their databases therefore Maura had to give them everything she could find on her own with the autopsy. And what she found out was that the victim had come from Baldone, Lativa.

Apparently the fillings in his mouth were registered with the European Department of Health and the specific fillings was what were used following the Chernobyl disaster. So Maura was able to provide the detectives with their victim’s genetic makeup, but Frankie had gotten even luckier with the gang division. Who told them that their shooter was a young man who went by “Little Nicky” and that Nicky used to run with The Quint Street Boys.

That is before he managed to cross them somehow. Although Frankie was told that Nicky could have done anything. Such as insulting someone’s woman or possibly taking the last piece of gum because it didn’t take a lot for The Quint Street Boys to fly off the handle.

Yet Jane did think it looked extreme that the gang would bring someone a possibly hitmen for overseas just for a kid. “Little Nicky” was revealed to be Nicky Bartuils and he had been staying with his aunt who had previously told police that she had never seen him before. Nor did she know anyone by the name “Little Nicky”. So the detectives decided to use Aunt Katrin to lure Nicky into a trap.

And they did this by later pulling their guys from the neighborhood to make it seem like that investigation had calmed down. Though when they were hoping Nicky would go running to the one person he had left in the world – his aunt. Who admittedly had a bit of a shady past herself.

So Jane should have known that Aunt Katrin would find a way to shake a tail yet she had underestimated the other woman. And that resulted in a wasted amount of time spying on her although Frankie did end up meeting someone he might want to date after all of this. That is if their differences don’t set them apart.

Frankie you see had borrowed a young woman’s apartment because it had been overlooking Katrin’s apartment. Yet the beautiful woman he met was a Grad student at art school who loved classic movies and cracking jokes. And she seemingly had little to no interest in the Red Sox.

Therefore, they had barely anything in common besides the fact they were both interested in each other and were single. And so Korsak would later tell him to go after the girl in order to see what’s there. Rather than just discount what could be a pretty good woman.

And as for Aunt Katrin, Jane and Korsak did end up finding her again and she did lead them to Nicky. Only Nicky was sitting on pretty good information that he had been too afraid to talk about to the police. And his lawyer had also advised him not to say anything.

However, Jane knew how to put him at ease. She left the station to go see his aunt Katrin and she had convinced Katrin to talk Nicky into testifying. Jane had told the other woman that Nicky wouldn’t be safe in jail and that, unless he interested witness protection, the gang was going to get their hands on him.

Which is what happened when Jane returned to the station with Katrin in tow. It seems someone had alerted the gang onto Nicky’s whereabouts and so The Quint Street Boys were going to dispose of him unless Maura finally figured out their hiding place. And she’s been struggling with that because of the slight flu she was suffering from.

But thanks to the many traditional remedies she had been offered, Maura did get better and she was able to figure which junkyard was in use thanks to the metal pieces found in John Doe’s shoes. So Boston PD were able to save Nicky’s life before the gang crushed him to death.

And he’s willing to testify against them in exchange for witness protection for both him and his aunt.

Meanwhile Frankie chose to go to a gallery opening with that woman over going to his local bar to watch the Red Sox go up against the Yankees.