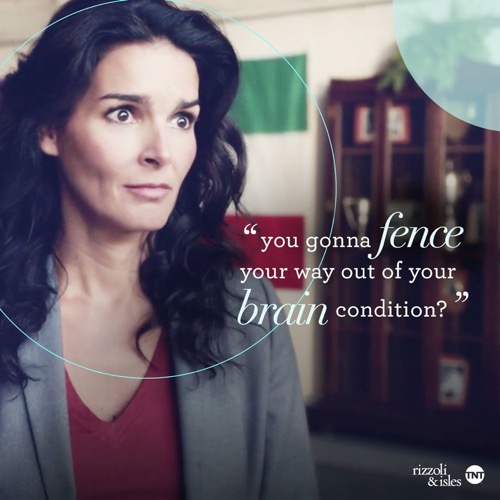 Tonight on TNT RIZZOLI & ISLES returns with an all-new hour Monday, June 27 season 7 episode 5 called, “Shadow of Doubt,” and we have your RIZZOLI & ISLES recap below. On tonight’s episode, a wealthy woman is found dead at the bottom of her stairs in a case that pits the team against a sly killer determined to pull off the perfect crime.

On the last episode, a mailman was murdered, so the team joined investigative forces with a brash postal inspector who suspects the killing was part of a conspiracy. Did you watch the last episode? If you missed it, we have a full and detailed recap right here for you.

On tonight’s episode per the TNT Synopsis “a wealthy woman is found dead at the bottom of her stairs in a case that pits the team against a sly killer determined to pull off the perfect crime. Also, Maura decides to undergo surgery, prompting a possible reconnection with Hope (Sharon Lawrence).”

There was apparently no such thing as a simply slip and fall on tonight’s episode of “Rizzoli & Isles” when Maura and her trusted assistant proved that Michelle Stevens’s death was not an accident.

Michelle who was wealthy lawyer in Contract Law had been found at the bottom stairs by her daughter Claire one night and at first it was assumed that the fall itself was what had actually killed her. However, Maura and Kent later spotted several discrepancies with what they were told happened and what they could prove. Claire had a crack on her skull that seemingly stemmed from blunt force trauma and the blood splatter at the scene had been off as well. There was a large portion of blood on the walls and that could only make sense if she had either been thrown into the wall or had tried to get back up from a fall that was supposed to have killed her. So Maura and Kent had no choice with this case. They just had to mark it as a homicide.

Yet, investigating the homicide proved to be harder than everyone though because it wasn’t merely the crime scene that wasn’t adding up. Claire had said that she found her mother at the bottom of the stairs after she had gotten up in the middle of the night though she had left several parts of that story out of her official testimony. Claire it seems had forgotten to mention that she got into a fight with her mother because Michelle didn’t want her to date and wanted her to break up with her boyfriend. So Claire failed to bring up that and she also forgot that she had left the house to go to a party with her boyfriend.

Claire had gone to that party and she had partied for quite some time before she decided to go home and her boyfriend allegedly slept off his hangover in his friend’s room. So not only did Claire have a motive to hurt her mother, but she might as well have an accomplice because who could say that the boyfriend didn’t sneak out of the room while the party was still going and helped Claire with her little problem. There had been evidence of tampering by one of the windows so Korsak theorized that the boyfriend could have enter the home through there. Though there was one suspect that looked as just as goof for the crime – the husband.

Everything Robert had ever said to the police had been a lie. He hadn’t grown up in an affluent home like he said, he hadn’t graduated Harvard like he said, and basically he was living off his wife’s money because his antiquities store hadn’t been doing as well as everyone thought. So Robert was basically a con man and worse there was evidence that he had killed before. Robert had had a pregnant college girlfriend that died after falling down the stairs while he was asleep and he had claimed to be asleep when Michelle died as well. But Jane for one was not buying it when Robert later tried to say that it was all a coincidence.

Jane thought Robert was their guy because he would get his hands on his wife’s money now that she was dead and Korsak was still fishy about the daughter Claire because both mother and daughter had been drinking on the night that they could have ended up in their most ferocious fight. So the only way they felt they could answer any question of theirs was to bring the both in. Claire had showed up with a lawyer that didn’t let her answer most of the questions that the detectives had and Robert had surprised that very same lawyer when he agreed to a polygraph. Robert said that he had nothing to hide and it turns out that he did have an answer for everything.

Robert said that what happened to his college girlfriend really was a coincidence and that he had an honest relationship with his late wife. So there was nothing that Jane could say that could trip him up although she did try her best when she showed Robert pictures of him with another woman. A woman she thought he was having an affair with. Yet, Robert even had answer for that too. He said that he had an open relationship with his wife and that they didn’t consider sex with other people cheating. And therefore he didn’t have an affair with anyone.

So Robert seemingly had everything covered yet the only person that was convinced that he was still guilty was Jane. Jane had a gut feeling that told her that Robert was guilty so she decided to follow it. Jane later went to Claire’s school to talk to the young woman and she told Claire to call her if anything seemed out of the ordinary with Robert or if she thought that Robert was hiding something that related to her mother’s death. But Jane hadn’t been all that sure that Claire would call her until it actually happened. Claire called and said that she thought Robert was hiding something in their storage container and Jane went out to their unit and found Robert with a bloody field hockey stick in his hand.

However, there were still a few loose ends. The bloody weapon that had been found with Robert couldn’t be proved without doubt to be the murder weapon. The stick matched several of the wounds though the blood splatter that could have proven everything had been smeared on the wall. So blood analysis was out and unfortunately the only fingerprints that could be found on the weapon itself belonged to Claire. That was Claire field hockey stick after all and Robert eventually went on record to state that he had only been hiding the weapon because Claire killed her mother and he had covered it up to protect his stepdaughter.

The one that he lovingly raised and who he had looked after even when her own mom was busy. Though Jane knew her gut feeling wasn’t off so she continued to believe Robert was guilty even as the DA began to mount a case against Claire. So what Jane did was retrace his footsteps and question everything. Including the girlfriend’s death twenty years ago. Maura had taken a look at it after she had surgery for her little problem and she had found evidence that the girlfriend had had her head banged repeatedly on the steps. And that meant that Robert really did kill his girlfriend all those years ago.

And if he could kill someone that he loved with his bare hands once before, who could say that hockey still was even used. It had blood on it, but not much else. So Jane and Korsak went looking for the real murder weapon and that led to them finding the homeless man that had been wearing Robert’s bloody shoes. The ones that Robert thought he had gotten rid of it when he ditched everything else in the dumpster yet the homeless man managed to save one last piece of evidence. He had taken out the shoes because he thought they looked comfy and the shoes had both Robert’s DNA and his wife’s blood all over it.

So Robert did kill his wife though he was going to blame it on his stepdaughter if the police didn’t rule it as an accident and that’s what nearly happened.