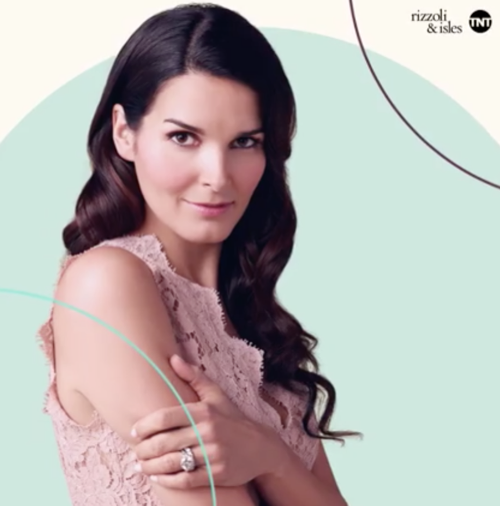 Tonight on TNT RIZZOLI & ISLES returns with an all-new Monday, July 25 season 7 episode 8 called, “2M7258-100,” and we have your weekly Rizzoli & Isles recap below. On tonight’s episode, Jane (Angie Harmon) goes undercover in a county jail to lure out a murderer.

On the last episode, a bicyclist’s bizarre death was investigated, pitting Jane and Maura against a science-savvy killer. Also, Jane was invited to teach a class of FBI recruits. Did you watch the last episode? If you missed it, we have a full and detailed Rizzoli & Isles recap right here for you.

On tonight’s episode per the TNT Synopsis “Jane goes undercover in a county jail to lure out a murderer. Angie Harmon directed the episode.”

A double homicide threw the police off their game on tonight’s episode of “Rizzoli & Isles”. Two men had been found dead in an auto repair shop and the only thing the police had to work with was the fact a woman had been seen fleeing the scene. So they had wondered if this woman was their killer or a possibly witness yet they could do nothing about until they found her. And even after they did, she refused to discuss the victims or why there had been a complete arsenal hidden by a secret panel.

That’s right an arsenal! There had been several automatic rifles found and so the police didn’t know what their victims had been involved in or what led to their deaths. But they knew that Kelly Wagner held the key to everything. Kelly’s lipstick had been found on one of the victims so odds are that she was personally involved with Leo. Leo and the other victim Grimm had been killed with a single gunshot wound however, neither body was disturbed or tampered with besides that one kiss Kelly had seemingly given Leo. So once they stopped viewing Kelly as a suspect, they knew that they had to get her to talk about what she knew and who she might have suspected for Leo’s murder.

However, getting a tough one like Kelly to talk was proving to be difficult for the cops. She had a suspicion and they knew she had a suspicion however she was remaining unusually quiet even as she began trying to arrange a murder from behind bars. Kelly had gotten put in lockup because of the whole resisting arrest and basically attacking Frankie when he tried to arrest her. So Jane felt the only way she could get Kelly talking was to go in undercover at the prison even though no one liked that idea. Especially Korsak and Jane’s mother.

Jane’s mom Angela had gone as far as trying to talk Jane out of the sting. She said that it was dangerous and that plenty could go wrong. Yet, Jane had tried to reassure her mother by telling the other woman that certain protocols were going to be put into place. So she had hoped that would be enough, but was very clear when she said that she had to go through with the plan. Kelly had been looking into making friends while she was inside and so Jane knew that she had to hurry. And ultimately decided on the code word Walrus if he would make Korsak feel better.

The guards though did give Jane some warning. They said code word or not, they weren’t always going to be able to step in when necessary in case that causes suspicion. So Jane had been told to act as if she was on her own and naturally she didn’t let that stop her from standing up to a few bullies when she met them. Jane had seen that Kelly was being harassed so she intervened. Jane went up to them and knocked one of them on the shoulder. And in prison, something like that creates a feud.

It had gotten them to leave Kelly alone temporarily though it also made them notice Jane. So after they tried to assault Kelly in the bathrooms, they were prepared to turn that situation into a twofer and attack Jane as well. But Jane wasn’t frightened of the two women. She ended up getting the better of them quite easily and Kelly had seen that so that had made Kelly think about a job she needed to be done.

The cops had known that Kelly was looking to hire someone to kill a guy for her. So Jane had set herself up pretty nicely because she had shown Kelly that she could handle herself in a crisis so later Jane had been propositioned. Kelly had told her that she could wire her ten thousand dollars if she could kill Jeff “Snake” Morgan who was a biker in the Lords of Thunder gang for her. However, after Jane was released, she began to question the job and the suspect. And so she asked Nina to run a background check on Kelly to see if she has any family.

And what do you know she does. It seems Jane didn’t think that Kelly was the one that witnessed the murder because Kelly’s concern didn’t appear to be for herself. So finding out Kelly had a younger half-sister named Marley had helped put things in perspective. Jane had later revealed that she was a cop to Kelly and so Kelly finally admitted the truth after she’d been caught setting a murder for hire. Kelly said that her sister had witnessed the murder and had told her that it had been Snake that did it so she’s been trying to kill Snake before he could get to her sister because she knew she couldn’t do anything while she was locked up.

So Kelly gave the detectives everything they needed to fine Marley and eventually they found the teenager before she could be hurt. However, Marley and Kelly had to agree to testify in order for the charges against Kelly to be dropped although the proved to be easier for them after Snake and his men were arrested. The police had everything they needed on the Lords of Thunder so the biker gang were going to be going away for a while and so Kelly finally got the guaranteed that her sister was going to be safe.

Although, as a surprising twist, Jane ended up getting another woman out of prison because she realized that she had helped foster the bond that got Kelly to trust her. So Jane’s time in prison had sort of opened her eyes and maybe that’s why she called a new friend at the FBI. You know the one that was handsome and had also offered her a job.