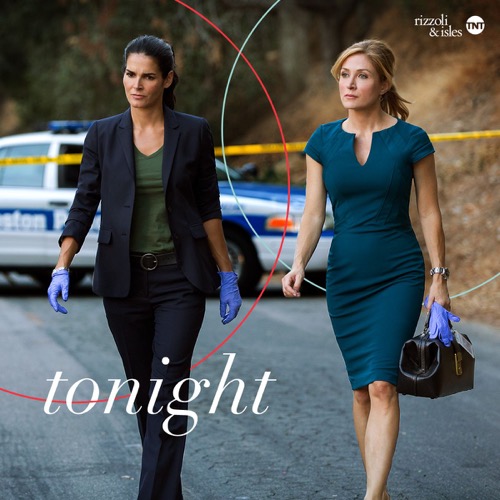 Tonight on TNT RIZZOLI & ISLES returns with an all-new Monday, August 1 season 7 episode 9 called, “65 Hours,” and we have your weekly Rizzoli & Isles recap. On tonight’s episode, Jane (Angie Harmon)  is slated to testify at a murder trial, only to discover a key piece of evidence has been stolen.

On the last episode, Jane went undercover in a county jail to lure out a murderer. Did you watch the last episode? If you missed it, we have a full and detailed Rizzoli & Isles recap right here for you.

On tonight’s episode per the TNT Synopsis “Jane is slated to testify at a murder trial, only to discover a key piece of evidence has been stolen. With only three days to resolve the crime, the team races to crack the case before the murderer goes free. Also: Frankie learns magic to impress Nina.”

The key piece of evidence went missing in a double homicide on tonight’s episode of “Rizzoli & Isles” and so the detectives had to race against the clock to find the evidence before a murderer was allowed to walk on a technicality.

So what Jane and Korsak first wanted to know was what went wrong? Boston Police apparently had everything they needed to pursue a case and even win a conviction against Banyan because they knew without a doubt that Banyan had broken into the victims’ home and had then proceeded to kill both the husband and the wife before fleeing the scene. However, the police were only able to prove that Banyan was their killer because of a cutting board. The same cutting board which belonged to the victims and that had been in the house on the night of the murders yet somehow had Banyan’s blood all over it. And so that blood showed that Banyan had been there that night as well.

And what with Banyan’s history, everything else just fit. He was there that night and he has a criminal history that showed he was violent. It just made sense that he would break into a home that he might have assumed was empty and then kill the witnesses before they could tell anyone about him. But unfortunately, the prosecution needed something more than a story. Even if it was a credible plausible one. So really they had nothing without that cutting board that tied Banyan to the crime scene and proved that he had at least been at the scene of the crime.

However, the detectives had tried looking for the cutting board and they couldn’t find it anywhere. They had searched the whole building and that included looking into everyone that had access to the evidence locker. So it wasn’t until that failed that Jane thought of the security tapes. Jane had thought and possibly hoped as well that they would spot someone sneaking in and out with the evidence. Only that wasn’t the case because everyone that had entered the room had been cleared and none of them could be traced to Banyan or his lawyer.

Nina though had an idea. Nina knew for a fact that the security camera could be accessed remotely so that had helped the detectives figure out that their culprit had most likely stolen it after getting help from someone watching the feed. Yet, even as they later followed the evidence back to a woman named Donna, they couldn’t’ figure out her connection to Banyan. Donna had recently arrived in the city and so there’s no way she would burn a cutting board for a man that’s been in prison for the last two years while she’s only been in Boston for six months. So Donna couldn’t be the same person that broke into an evidence locker, to begin with.

The person that broke in had gotten in by climbing through the vents and bypassing all the alarms so that didn’t like Donna who was a drop out that had intended any kind of higher learning. Though Donna didn’t want to flip on who gave her the cutting board so it had to have been her boyfriend. The same boyfriend that had apparently given Donna a ring which had been the only thing that could invoke some kind of reaction when Korsak tried to ask about it. So the detectives were trying to figure who would have a connection to both Donna and Banyan because they knew Banyan had been behind the theft.

There hadn’t been anything else that was missing from the evidence locker so Banyan must have talked to someone he knew who would help. But seeing as Donna had burnt the cutting board, the detective knew they had to find something else to tie Banyan to scene. So they had gone back to the crime scene which hasn’t been disturbed in two years and they had tried to find something that could be as good as that cutting board and thankfully they came across the skylight. The skylight had been Banyan’s means of getting into the house and it turns out he had cut himself while he was getting in so that’s what caused him to bleed on the cutting board.

And although that was enough to lock Banyan, the detectives were no longer satisfied with just getting him because that skylight had showed Banyan had a partner. There was seemingly no way that one person could climb down from that skylight on their own. So he must have had a partner that helped him reach the ground careful and the detectives figured that it was probably that same partner that had gone through the trouble of getting Banyan off. What with Banyan having something on him that could just as easily take the partner down for being at that crime scene.

So once Jane and Korsak had everything they needed to again put Banyan at the crime scene, they threatened him with life in prison without parole if he didn’t hand over his partner and so Banyan ultimately proved that there wasn’t honor amongst thieves when he lured his “friend” into a trap for the police.