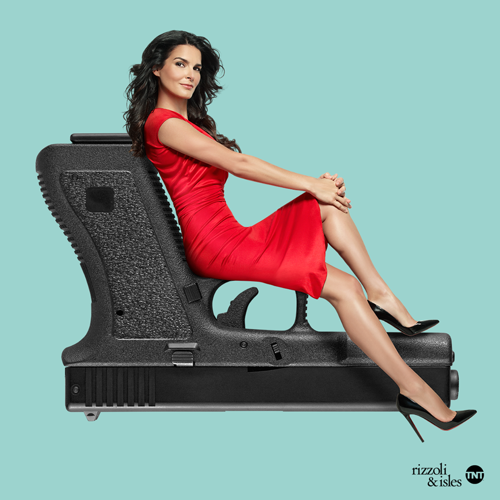 Tonight on TNT RIZZOLI & ISLES returns with an all-new hour Monday, August 15 season 7 episode 10 called, “For Richer or Poorer,” and we have your weekly Rizzoli & Isles recap below. On tonight’s episode, a forensic accountant is shot, luring Jane (Angie Harmon) and Maura (Sasha Alexander) into a byzantine Ponzi scheme.

On the last episode, Jane was slated to testify at a murder trial, only to discover a key piece of evidence had been stolen. Did you watch the last episode? If you missed it, we have a full and detailed Rizzoli & Isles recap right here for you.

On tonight’s episode per the TNT synopsis, “a forensic accountant is shot, luring Jane and Maura into a byzantine Ponzi scheme. More complexities arise when it’s discovered the main suspect is someone from Maura’s past. Also: Jane makes a big career decision. Sasha Alexander directed the episode.”

Jane had some rather surprising news for Maura on tonight’s episode of “Rizzoli & Isles”. Jane had apparently been offered a job teaching at the FBI academy in Quantico so she was wondering whether or not she should take the job when she told Maura about the offer. Maura however had no problem with Jane wanting to hang up her detective badge to teach.

Maura told Jane that she would have better hours and that she would be doing something just productive. So Jane wasn’t sure how to feel. There was a part of her that did want to go and the other that worried about leaving both her friends and family. Yet, a fresh case did help take her mind off things.

Jane and Maura had been called out to a park where a young man had been shot in the back, but there had been nothing missing on the victim and it looked too messy to be a hit. So the only thing that was initially making sense was if the case turned out to be random which is something the detectives personally hated. A random crime has no motive or suspects so solving it was particularly nightmarish for the detectives involved.

However, just as they thought that would be looking for a needle in a haystack, they caught a break when they came across a second victim. The second victim had also been shot yet he continued to live.

So finding Edward Dunn had been a godsend to practically everyone except Maura. Though Maura would never wish that Edward was killed, she truly wanted nothing to do with her ex-husband who she considered to be one of her biggest mistake. Edward came from influence and he could be remarkably charming although his marriage to Maura had simply been something that went too far.

He and Maura had gotten married when they were very young and thought that eloping sounded fun so they had come to their senses after sobering up. And had properly had their marriage annulled.

But Maura’s short marriage didn’t give her any insight into what Edward had gotten himself caught up in. Edward had apparently taken over his family’s firm after his father died and he had been found shot not far from a dead forensic accountant. So Jane and Korsak questioned what Edward was involved in and seriously considered him to be a suspect in the accountant’s murder.

They said there was a chance that he was hiding something in his finances or doing something illegal in order to maintain his father’s company when the accountant found out what he was doing and blew the whistle. And so the only reason they couldn’t make that theory stick was the fact that Edward hadn’t been found with a gun.

Edward however did have some secrets because Jane found out that he had never gone through with the annulment. So he was still married to Maura and unfortunately Jane had to be the one that told Maura that she was legally Edward’s next of kin. Yet, with her marriage came ramifications. Maura had to recuse

Tilly was Edward’s overbearing mother and the older woman had never approved of Maura. She thought her son deserved better which in this case meant a possibly debutante so the two had eventually broken up because Maura knew that Tilly would never allow Edward to leave the city to follow her to med school.

However, it seems Maura had underestimated just how much Tilly hated her because Maura was one of the first things that Tilly brought up when Jane later questioned her. Tilly had thought it was offensive that her son was suspect and had blamed the investigation into Edward on Maura.

The older woman had told Jane that Maura has been looking for payback all of these years and that she was using their current tragedy to hurt Edward. Though the one person that was hurting Edward was the man himself. Edward had woken up in the hospital and oddly he didn’t want to talk to detectives.

Not even after Jane told him that he was no longer a suspect because forensics cleared him and that she wanted to help find the person that shot him. So Edward was simply choosing to be difficult and Maura thought she might know why.

Maura told Jane that Tilly might have something to do with Edward clamming up. She said that Tilly could have possibly pulled ranks and told Edward not to talk in order to protect their image and reputation. So Jane asked Maura if she could talk to Edward and Maura promised to do what she could. However, getting around Tilly took some time so Maura eventually had to act fast with Edward.

She came across Edward when his mother stepped outside to take get him some food so she snuck him out of his room where they could talk.

Maura it seems had been told that Edward had an old photo of them together in his wallet so she confronted him about it. She said that Edward must have had that photo on him because he knew that she was someone in law enforcement that he could trust. So she asked Edward to trust her with the truth and he told her everything.

He said that he had noticed some discrepancies in the company’s accounts after he had taken over and that he had Michael Steele to investigate it for him. Yet, on the day they were supposed to meet up again with Michael’s finding, he had found Michael dead and some began shooting at him.

So the last thing that Edward remembered was falling down a hill as he tried to get away. But he told Maura that he had saved copies of what he found and that he had hidden at his house to keep it safe so Maura was going to bring the copy to the police when she ran into Tilly. Tilly had been told by her son that he was handed things over to Maura so she had showed at his house with a gun to stop Maura.

Tilly believed that whatever was in the documents would hurt her family and their company so she had wanted to stop Maura and came with a gun because she was that serious.

However, Maura talked her down. Maura said that Edward’s life was more important so the two talked and surprisingly they figured something out about family friend Noah. Noah ran a hedge fund though it appears that his company was a Ponzi scheme and that Edward’s father found out. The documents that Edward had secreted away showed that his father Phillip had begun to pay Noah’s clients from their own personal accounts so that those people wouldn’t lose anything. And that Noah was willing to stop whoever caught on.

Noah killed the accountant that was only doing his job and he was prepared to kill Edward who he had known his whole life. So once Tilly had told Maura that it had been Noah’s idea not to talk to the police to preserve their image, everything else just fit. Though Maura had been driving with the documents and was going to meet up with the detectives when Noah ran her off the road. He had done so to pin her in a ditch and had then taken out a gun to finish what he started.

And yet he never got that chance because Jane and Korsak had showed up just when Maura needed them the most.

And so Noah is going away to jail however he had also seemingly brought Edward back into Maura’s life. The two still went ahead with their divorce and even had a part for it. Yet, with Frankie and Nina now firmly together and Angela back with her hot doctor boyfriend, Jane had felt it was time to take a decision and so she told Maura that she chose to take the job at the FBI. She was apparently ready for her fresh start as well.