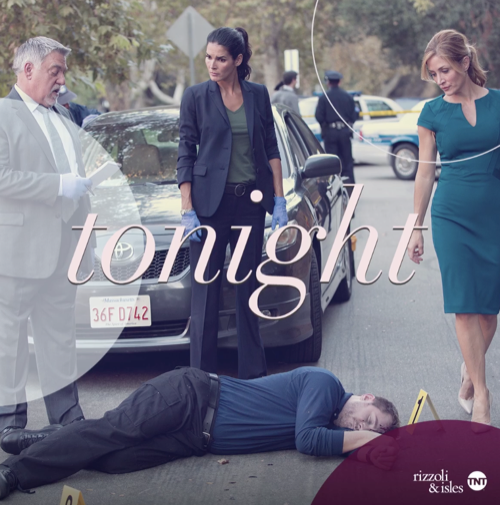 Tonight on TNT RIZZOLI & ISLES returns with an all-new hour Monday, August 29 season 7 episode 12 called, “Yesterday, Today, Tomorrow,” and we have your weekly Rizzoli & Isles recap below. On tonight’s episode, Jane (Angie Harmon) and Maura (Sasha Alexander) sharpen focus on two murders, one from the past and one from the present.

On the last episode, a mortician’s body was found in a casket at his own funeral home, leading the team to a serial killer. Did you watch the last episode? If you missed it, we have a full and detailed Rizzoli & Isles recap right here for you.

On tonight’s episode per the TNT Synopsis, “Jane and Maura sharpen focus on two murders, one from the past and one from the present, both of which have a personal impact on Korsak. Meanwhile, an unforeseen visit could lead to romance for Jane, and Maura receives unsettling feedback on her novel.”

Jane was moving away and to her it felt like everyone wanted to help her with her move. Jane’s mother for instance, wanted to teach her daughter as many recipes as she could so that Jane could have a reasonable meal when she moves to D.C. yet Maura was just as bad because Maura had actually created a relocation journal for Jane so that her friend didn’t end up leaving anything behind during the move. However, Jane felt that it was all too much. So she had told them both to take it easy and was feeling pretty bad about bursting their little bubble of optimism when she got called into work about a new case. That also appeared to be personal for Korsak.

Unfortunately, Korsak had known the victim back in the day. The detective it seems had once dated Walter Sokoloff’s older daughter Mary when they were younger and the two had even been together when Mary’s baby sister Wendy had been murdered at the family home. So going back to that house and finding out that Walter had been murdered as well had brought up a lot of memories for Korsak and not all of them were good ones. Korsak had apparently tried to stay in contact with the family after Wendy’s death so he had seen for himself how the family simply fell apart afterwards.

Walter as it happens, had turned into a heavy drinker back then. So eventually his wife and daughter couldn’t just take it anymore and they left him to try starting over somewhere else. However, with Mary gone, Korsak stopped coming around. He was a kid after all so he hadn’t really gone out of his way to stay in touch though if he had then he would have known that things did get better in the end for everyone. Most especially Walter who was able to turn his life around and stop drinking. And had also taken on a new career.

Walter had actually worked for victims’ advocacy. So often he would go to parole meetings with victims or the victims’ families where he would testify why so and so deserved to stay in prison. But naturally that created a lot of enemies. People who didn’t get out of prison because of Walter would sometimes have family members that felt like they had been enough so it was usually them that called what Walter did vindictive. Even when it was coming from the right place and he genuinely knew that Walter and his clients had a right to their opinion. And so when Walter ended up dead, the detectives decided to first check his files to see what cases he was working on.

Though Maura later told them that they shouldn’t bother with that particular angle because she found something on the victim. Maura had apparently found DNA on Walter’s body that was an exact match for Wendy’s killer. So that proved that both Wendy and her father had been killed by same person however, in the forty years since it happened, no one had ever found Wendy’s killer. Wendy had killed at a party thrown by some rich kids from her school and so no one had really cared about the scholarship kid. And the people that had owned the house had been quick to distance themselves from what happened.

So starting the whole investigation over again was a hassle and it didn’t help that the detectives found themselves dealing with the Davenport Family. The Davenports were rich back in 1975 when Wendy was murdered and unfortunately they still had the means to lawyer up in present times. Yet, there were a few things that the detectives just wanted to go over. Like the alibi that Oliver Davenport had given his sons. Oliver had said at the time that his son had been in his den with him during the murders so that had cleared them back in 1975, but recent information casted doubt on what Oliver said.

Oliver’s sons had been in and out of trouble with the law since then. So over time it eventually became commonplace for Oliver to cover up for what they did or pay to get one of his sons quickly out of the country whenever necessary. But Oliver couldn’t really do that anymore because he was sick now and couldn’t even remember if his wife was alive so Jane might have used that to her advantage. Jane had showed up at the Davenport house after she had expressly told that Oliver wasn’t up to seeing anyone yet she still went into the house and talked with Oliver. Oliver on his part had thought Jane was his wife so he had told her he missed her and had cried to see her again. Only Jane had taken those tears to run against DNA.

And Oliver’s tears proved that one of his sons murdered both Wendy and her father. Though the detectives didn’t know who until Maura ran tests on the evidence they had in 1975 and found out that it had been a child that killed Wendy. Therefore, it could only have been William Davenport that killed his classmate. William had gone to school with Wendy and he had also invited her to his birthday party at his house, but sadly one thing led to another and he killed her after an argument that should have been a childish spat. So it ended up being a good thing that William couldn’t cover for himself like his father would have because the detectives found him on a private plane when they arrested him.

However, now that Korsak finished wrapping up what was basically the first case he ever investigated, he suddenly felt like now was the time to retire. So Korsak was finally retiring and it seems he was ready to devote himself to his new wife yet Korsak didn’t appear to be the only one that was leaving because Maura also mentioned something. Maura told Jane that she thought about moving to France for a year to write her book and take in the sites so slowly but surely it looks like everyone was leaving.