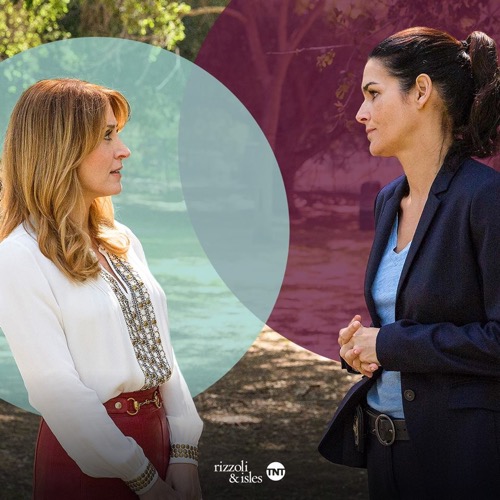 Tonight on TNT RIZZOLI & ISLES returns with an all-new hour Monday, August 22 season 7 episode 11 called, “Stiffed,” and we have your weekly Rizzoli & Isles recap. On tonight’s episode, a mortician’s body is found in a casket at his own funeral home, leading the team to a serial killer.

On the last episode, a forensic accountant was shot, luring Jane and Maura into a byzantine Ponzi scheme.  Did you watch the last episode? If you missed it, we have a full and detailed Rizzoli & Isles recap right here for you.

On tonight’s episode per the TNT Synopsis, “a mortician’s body is found in a casket at his own funeral home, leading the team to a serial killer. Meanwhile, Tommy Rizzoli arrives with his son and contemplates staying in Boston for good, and Jane’s loved ones react to her news.”

Jane had gotten the worse part of her move over. She had told her mother Angela that she had accepted a job with the FBI and, with Maura offering as much support as possible, Angela came to see what a great opportunity the job was for Jane. So Angela had ultimately her consent and said that she couldn’t wait to visit Washington DC.

But what really helped Angela get over the fact that her daughter was moving away was the return of her son and grandson. TJ and Tommy were back in town and apparently they needed a place to crash because things didn’t work with Tommy and Lydia. And so Angela was going to have her hands full now that she needed to help out her son Tommy.

Yet, Jane and her partner Korsak ended up coming across their fair share of unusual families. The detectives had gotten called out to a burial site after a “grieving” family had dropped their grandmother’s casket and found a John Doe inside.

So the detectives were trying to figure out who the John Doe was and how he had gotten into the casket while the family that were supposed to be burying their loved one had decided to turn the whole thing into a joke. Including one grandson who had told Korsak that the John Doe might have been a snack for Grandma.

So the young kid and his family were all making jokes about who could be the John Doe and if their grandmother was going to turn into a zombie although there was a real investigation that was happening right in front of them.

However, Jane and Korsak had ignored the Hendersons and was following up on the funeral home when they found out their John Doe did have a name. John Doe was actually the funeral director that had arranged Mrs. Henderson’s funeral and the only relative he had nearby didn’t’ even notice that he was missing.

Sam Mason’s sister had worked at the funeral home and she had also been her brother’s business partner. Though strangely Kate who had performed most of the embalming and was allegedly closed to her brother hadn’t known that Sam was looking to sell the business.

Korsak had later met up with a woman that Sam had been in constant contact with lately and it turns out that she came from a much larger funeral home corporation that was also looking to buying up smaller businesses. So it looks like Sam wanted to sale and that he was purposely keeping his sister Kate from finding out.

But unfortunately all of the corporate espionage was making Kate Mason look like a viable suspect in her brother’s murder. She hadn’t been part of the sale much less had any knowledge of it. So the detectives had worked on a theory in which Kate killed her brother in order to keep what they build and have him out of the way though the detectives later found something odd about the Mason family.

There was apparently another body that had been hidden in someone else’s grave and the victim in that case had gone to college with Kate and had seemingly been embalmed by Sam himself.

So the detectives were trying to work out how that came to be when they came up with another theory. Korsak had possibly wondered if Kate had killed this Ben Norton and that her brother had covered for her until the guilt eat away at him and he wanted to sell the business in order to get away from his sister. Yet, after they dragged Kate in, she ended up swearing in her interview with the police that she had nothing to do with what happened with Ben and that she didn’t know what was going on. And so the detectives took their focus off of her and instead looked into her late brother Sam.

Sam however was proven to be as dirty as they come. Sam had made some sort of career out of hiding bodies. So a search warrant allowed the detectives to check out all the funerals Sam had planned and the detectives eventually found out that Sam had hidden even more victims in other people’s caskets and that sometimes he had gotten lazy. A few of the victims had simply been dumped in some of the graves sites for instance. And so either Sam was a sloppy serial killer or he was working with a serial killer that paid him to hide evidence.

Jane though suspected the latter. She had talked to Maura who had performed autopsies on the victims they found and Maura had said that each of the victims had painfully been murdered. Someone had taken time to slowly watch them die and Jane didn’t think that sounded like Sam who didn’t show such tendencies before he too was murdered. So Jane thought that Sam had merely embalmed the victims and that he was probably trying to sell the business as a way to get out of what he was doing. However, his silent partner had found out about it and had killed him to keep the murders quiet.

So Jane had asked Nina to look into the victims and Nina found out that the victims had all been models. Struggling models unfortunately that had all gotten their picture taken by the same photographer that had offered them cheap headshots. Though the serial killer had sued those headshots to find his victims. He would take their picture and found out everything he could about them. Just so he could stalk and murder them all the while he recorded everything in his sick photo journal.

But that photo journal was very helpful for the police. Once they had figured out who photographed their victims, they had gone to his house and had plenty enough evidence to indict on all of the murders. So all that was left was to tie Eddie their killer to Sam and Kate was able to help out there. Kate said that Eddie was a family friend who had lost his parents when he was young and that led to Sam looking out for him yet Eddie was able to get Sam to help him by threatening Kate. Eddie had apparently told Sam that if he didn’t hide the bodies that Kate would be the next victim so that’s why Sam wanted to sell the business.

Sam wanted to sell the business to protect his sister!

And though later everyone was trying to get used to the fact that Jane was moving away, they were also celebrating some great news. Tommy had decided to live close to his mother. So that meant she was going to be around her grandson all the time and, well, Frankie had shocked Nina by proposing though she quickly said yes so that also meant there was another wedding in the immediate future. Yet, Maura has been thinking about her future as well and you would be surprise to know that the future she’s thinking of might not be in the Medical Examiner’s Office.