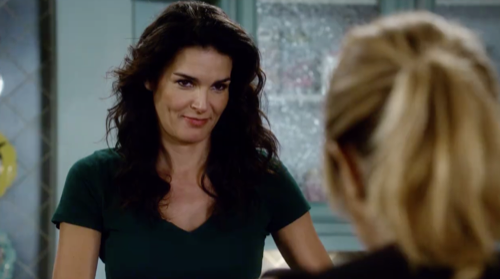 Did you miss last week’s episode where a mortician’s body was found in a casket at his own funeral home?  If you missed it and want to get caught up, we have a full and detailed last week’s Rizzoli & Isles recap, right here for you!

On tonight’s episode, “Ocean-Frank” as per the TNT synopsis, “The facts don’t add up when a dead man is found handcuffed to a bed in his own home. As the “Bon Voyage” party approaches, everyone makes a video to say goodbye. In the series final episode of Rizzoli & Isles, everyone says farewell and plans for their next adventure.”


It’s okay if you’re sobbing. So are we. Ready yourselves for the series finale of #RizzoliandIsles, Monday at 9/8c. pic.twitter.com/CGGOKkCbIg

Maura was going to miss Jane when Jane leaves for her new job in Washington D.C. Maura had apparently created a virtual memory book to remember all the good work they did together. So she was collecting images in her free time from the cases they worked on and she using them to create a virtual scrapbook of their friendship. However, in spite of everything, Jane later decided to see the sentimental side of the book. She could have called it odd or even creepy, but she chose to be sentimental because she knew that the book was Maura’s way of saying she was going to miss her and that their friendship was bound to change with them both taking off to different locations.

But before they got all sappy, the two received a call about another case. Their victim Robert Riley. Rober was found dead and handcuffed to his own bedpost yet his new wife of six months was surprisingly nowhere to be found. She was just gone and so was most of her clothing as well as a suitcase from the joint closet she shared with her husband. So unfortunately Mrs. Elaine Riley looked guilty because of the circumstances in which she fled the family home. And that in turn made Jane and Korsak focus their investigation on finding her although there was a good theory floating around.

Frankie had talked to some of Robert’s neighbors and one woman in particular seemed to know everything and anything that was going on in the neighborhood. So this woman told Frankie literally everything she could about Robert. Like how the time he would leave for work everyday at the same time and that there had been a suspicious car driving around lately. Yet, neither Frankie nor anyone else truly followed through on checking on the neighbor’s mysterious car theory until they had learned a little more about their victim. Their victim while found handcuffed to his bedpost had actually been killed before his body was arranged so and therefore someone had wanted to purposely humiliate him in death.

So that begged the question who would hate Robert that much? Maura’s preliminary autopsy on Robert showed that he had been involved in an altercation with someone before his death so there might have been a fight that went too far. Though was that fight with his wife because no one could find her to verify if it was. Elaine Riley formerly known as Elaine Chan had no background or history of her own outside of her marriage. And so Nina had a pretty hard time trying to locate Elaine when it was almost as if the woman didn’t exist before marrying Robert.

Nina however had also found out something odd about their victim as well. She had found out that Robert had paid a company called Second Pleasure Enterprise five grand right before his marriage. So that gave Nina and Frankie a reason to believe that Robert’s marriage to Elaine might be escort turned Mail-Order-Bride situation. Yet, the fact the wife disappeared seemingly off the face of the earth not long after her husband was killed, showed the arrangement Robert had with the “legitimate” business might have been shadier than a normal transaction. And for all they knew it could have something to do with human trafficking.

So Jane and Korsak followed on what Nina found. They visited the site for Second Pleasure Enterprise and saw for themselves that the business was a mere front to position. But the man that was running the place had talked to the police in exchange for being allowed to stay open. He said that the girl’s real name wasn’t Elaine. It was actually Wei Chan and Elaine had been her aunt. Wei had simply used her aunt’s name to legally get married to Robert and so the owner of Second Pleasure Enterprise was able to hand the police the real Elaine’s information.

Elaine though wasn’t some seedy aunt that tried to sell off her niece. She had simply been a hardworking woman whose niece needed a favor to marry a man that had said he wanted to take her away from her former life. However, what Elaine and Wei both found out in time was that Robert could be both manipulative and physically abusive. Robert had apparently accused Wei of marrying him only to get her papers, but common sense should have told him that wasn’t possible. Wei couldn’t get her papers that way seeing as she used someone else’s identification to marry Robert in the first place. So his accusations had merely been his own means of justifying for locking up his wife.

Robert it seems had kept Wei prisoner in their house and he had also stopped her from seeing or even speaking to her aunt. So the things he did to a woman he supposedly loved shows that Robert never wanted a wife in the first place. He had just wanted a slave and had tricked Wei into unwilling becoming one by marrying her knowing she would have no recourse to leave him. Though in spite of their claims, Elaine and Wei couldn’t have been telling the truth when they said Wei killed her husband. Elaine had tried to hide Wei yet the police eventually found her and again saw for themselves that something wasn’t right.

Wei was on the smaller side and she couldn’t possible have overpowered her husband who had a good hundred pounds on her. Nevermind the fact that it had also been Wei that had been handcuffed indoors for the most part. So there had to be a third party and with some pressure Wei did in the end reveal that she was protecting someone. Yet, she never turned him in because he turned himself in. The busybody neighbor had actually had a son about the same age as Wei and it had been the son that had fallen in love with Wei. And had unfortunately killed her husband because it was the only way to protect her.

So Jane’s last case on the job was a heartbreaking one. Neither Wei nor the man that loved her deserve getting arrested or prison time when you look at it yet they will have it tough trying to prove self-defense seeing as they had tried to cover up what they did and Wei had gone on the run afterwards. But Jane’s last day on the job meant she also had to clean out her desk. Korsak had already cleaned out his desk because he had used his vacation time and sick days to technically retire a whole month before he said he was going to so Jane’s desk was truly the only cluttered one that remained.

However, Jane had gotten a little teary-eyed while she was trying to wrap up her time at BPD. She had a lot of memories down at the station and with Maura. So she had been a little sad about saying goodbye to everything though Ken had had one final surprise for her. Ken had talked everyone into doing a goodbye tribute to Jane and the video had been moving and again a little sad, but Frankie and Nina’s engagement did help put people in a better mood. And later when Jane told Maura that she was taking a month off to go with her to Paris, Maura got excited about having just a tad more time with her best friend.