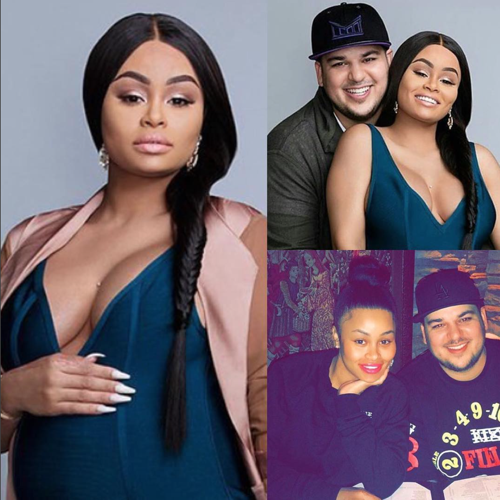 Tonight on E! their highly anticipated reality show Rob and Chyna premieres with an all-new Sunday, September 11, 2016, episode and we have your Rob and Chyna recap below.  On tonight’s Rob & Chyna premiere episode, we go behind the scenes to witness what happens when new couple Rob Kardashian and Chyna Blac start building a life together.

The couple is newly engaged and expecting their first child together.  The six-episode series will go inside their private world and they learn about each other and Rob finds his way back to a healthy lifestyle.

On tonight’s Rob and Chyna premiere episode as per the E! synopsis, “The complicated relationship dynamic between Rob Kardashian and his soon-to-be bride Blac Chyna is followed in this series as the couple deal with their engagement, pregnancy, and extended family. First up: Plans for raising their child together as married parents come under doubt due to suspicious minds, which lead to Rob moving out of the house.”

Rob and Blac Chyna finally have their own reality show on E! However, the show was apparently clearing up some misconceptions that pretty much everyone had about their relationship and surprisingly it was revealed on tonight’s episode that it had actually been Rob that pursued Blac Chyna. Rob, it seems had started texting Blac Chyna immediately following her breakup with Tyga which was also when the rest of his family were giving her a wide berth because of Tyga and Kylie’s relationship. So there really was only one word for Rob and that was a traitor. He was quite honestly a traitor that doesn’t even comprehend loyalty.

Yet, he’s Rob and so everyone does their best to overlook his flaws though funnily enough, he was marrying a woman that didn’t quite pander to him. Chyna and Rob had different backgrounds growing up and so they approached certain things in a different way. Such as their relationships with their respective mothers. Chyna loved her family and she knew that Rob loved his as well, but she hadn’t thought that he was a momma’s boy until after they became serious and she saw how much he depended on Kris for everything. So Rob’s relationship with his mother has become something of a running joke with Chyna and her friends.

They thought that Rob would never do anything without talking to his mom first so they had been laughing about that while Chyna had been driving when Rob called. Rob who was on speaker had been telling his fiancée that he had just gotten off the phone with his mother when she and her friends all busted out laughing in the car. So it does seem like Rob spends a lot of time on the phone with his mother yet he admitted that hadn’t always been the case. Rob mentioned tonight that he had hated leaving his room and had even gained a lot of weight because he had been having a rough time so it wasn’t until his relationship with Chyna that everything else began to improve.

Rob’s relationship with Chyna and the fact they were now having a baby was something that Rob said and believed was turning his life around. But what Rob was most excited about was possibly the baby. Rob told Scott that he hoped to have a boy. He said he wanted a boy because he wanted to carry on the name yet Scott had made fun of him for saying that so Rob also mentioned that he hoped to have the same type of relationship with his son that his father had with him. And so technically didn’t matter the sex of the baby, Rob simply wanted to be as amazing as his own dad had been.

Though later it was a good thing that Rob wasn’t too hung up on having a boy. Chyna and Rob had a sonogram with their OB/GYN and the sonogram revealed that they were having a girl. So that means Rob was going to be a father to the newest Kardashian girl, but he was frightened by that prospect and had still been excited about how they were going to reveal the baby’s gender to everyone. Rob and Chyna had talked about how they wanted to reveal the sex of the baby and they had both said they wanted it to be a surprise for their family. That they could reveal in a unique and unusual way. And yet Rob had ignored that plan the second he saw his mother.

Rob had apparently forgotten all about their plans when he saw his mother because he had quickly told her about the baby and that they were having a girl. So that had made Chyna angry. She said that all the Kardashians do was talk, talk, talk so she should have known better. However, Rob had managed to add on to that mistake when he later went too far in his dealings with his fiancée. Rob for some reason likes to look through Chyna’s phone when she’s out of the room so he eventually noticed that she had changed her passcodes to her phone.

Yet, Robb didn’t just let that go. Instead, he asked her why she changed her passcodes when she came back and then asked her what she was doing that she felt she should change her passcodes. So that had upset Chyna more than anything else because she felt he was accusing her of something and didn’t know what she did to deserve that so she defended herself. Chyna said that she has a kid, was working on her own businesses, and barely left the house anyways so she tried to tell Rob that she barely had any time to be up to something.

And so a simple fight spiraled even further out of control.

Rob kept trying to call and apologize to Chyna for accusing her and sadly that wasn’t working so he had tried something else. Though his idea of bringing flowers to her house didn’t really go down so well. What with his flowers being thrown into the pool because Chyna had truly been just that angry. So Chyna ended up doing what she seemingly always does in that type of situation. She threw him out of her house and then expected for him to keeping coming by so that she could eventually forgive him. Only Rob didn’t want to follow that pattern anymore.

Rob later explained to Scott that he was tired of getting kicked out because Chyna was always kicking him for something or another. So he chose to ignore Chyna and even disregarded her phone calls when she had tried to reach out to him. Yet, Chyna hadn’t given up after she realized that Rob was going out of his way to ignore her. Instead, she had gone over to his house to see if something was wrong and then when she couldn’t find him there, she had gone over to his mother’s house. Where she assumed he’d be if he wasn’t at his own place.

However, Rob wasn’t at Kris so Chyna decided to just talk to Kris. Kris had an idea of what was going on because Rob had pretty much told her some of the important stuff. So Chyna talked to her about what was going on and all the emotions she’s been going through and Kris was able to sympathize. While Kris made Chyna see that Rob was more on the sensitive side so Chyna would know that she had to talk things through with Rob, Kris also said that she would talk to her son herself to help.

So Kris did follow up on that and she ended up talking to Rob about his relationship with Chyna. But both Rob and Chyna are apparently having a hard time being together and sometimes the both if not one of them have questioned if they even want to be in a relationship with each other.