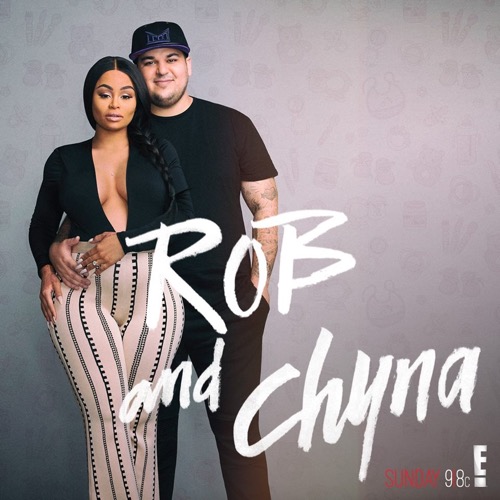 Tonight on E! Rob and Chyna airs with an all-new Sunday, October 2, 2016, episode and we have your Rob and Chyna recap below.  On tonight’s Rob and Chyna  season 1 episode 4, Chyna and Rob plan a kinky date night to help make their relationship stronger.

Did you watch last week’s Rob and Chyna episode, Rob experienced discomfort in the spotlight when he and Chyna attended Khloe’s birthday party? If you missed it we have a full and detailed Rob and Chyna recap of last week’s episode , right here.

On tonight’s Rob and Chyna premiere episode as per the E! synopsis, “Scott helps Rob reconnect with friends with whom he hasn’t been in close touch with for years. In other developments, Chyna and Rob plan a kinky date night to help make their relationship stronger.”

Rob & Chyna begins with a preview of Rob stepping out of his comfort zone, and goes to visit Chyna’s family on the July long weekend. He is very much out of his element, and even feels more awkward when her mother approaches them and asks when they are getting married. Chyna tells her they are playing it by ear, and her mother turns to Rob and tells him he needs to stop doing what he is doing.

Rob & Chyna continues with the party and her mother continue talking to Rob saying that Chyna doesn’t need to be raising their baby by herself. Chyna herself was raised without a father, and they don’t want that for her baby. Rob tells Chyna’s mom that he is not a cheater, and it’s not him that is ruining the relationship, it’s her daughter who is doing all of this.

Rob comes to visit Chyna and they play “rock, paper, scissors” to see if Rob gets any booty that day. Chyna changes the mood quickly when she brings up the conversation between Rob and her mother. Rob says her mom just doesn’t want her to get hurt and he agreed. Chyna says it worries her that everything happened so quick, and that they don’t really know each other. Rob says he is okay with how things are and is sure things will continue to progress, and be fine the more the find out about each other.

Rob goes to visit his sister Kourtney’s ex, Scott Disick, and they talk about Tyga; who isn’t only Chyna’s ex, and father of her son King Cairo, he is also dating Rob’s baby sister, Kylie. Scott tells Rob that he needs get along with Tyga because they are technically family. Scott then says that it’s the same thing as it was with Rob’s dad, Robert Kardashian and Bruce Jenner. Rob says it’s because his dad was a cool guy.

When Rob asks how Scott would feel if Kourtney moved on and had a child with someone else, how would he feel. Scott admits he would be in jail. Rob says it’s the same thing with Tyga and him. Then Scott get a bit paranoid and asks Rob, if Kourtney was going to have another kid with someone else. Typical Scott reaction!

Scott voices his concerns that Rob used to have a tight bunch of friends, that he never talks to anymore. It’s heartbreaking that they were so close and now Rob avoids them all because of his weight gain. Scott tells him to contact them because they love him for who he is, not what he looks like. When Rob gets uncomfortable, Scott changes the subject completely. Not sure how they ended up talking about STDs and colonoscopies but it broke the tension in the air.

Chyna is at home with her friend Sam, and they decide to take a quiz about love, that is on the internet. She tells Rob to take the test and they end up with polar opposite answers. Chyna decides to read up on Rob’s results and hers, thinking that this may be one of the reasons they are fighting so much.

Rob, after hearing the results from Chyna’s love test, invites Chyna’s friend, Paige over so she can teach him how to cook one of her favorite meals. He is super excited to do this for her. Rob gives his credit card to Paige so she can take Chyna out for a day of pampering. Rob is busy setting up for the dinner he is making for Chyna, and King Cairo is helping him set up. When Chyna gets back, Rob blindfolds her and brings her to the back patio for her “dinner under the stars”. She is so happy that he took the initiative and is actually listening to what she wants and desires.

Scott goes to visit Chyna to talk to her about Rob and his friends. He feels that Rob’s friends should meet her before the baby “pops out”. Scott tells her that his friends want to hang out, but its Rob who is stalling and reluctant. Scott suggests a BBQ, but Chyna says no right away. She does however, say that they should make it a surprise because if Rob knows, he will make an excuse for it not to happen or for him not to attend. Chyna really takes the talk to heart and realizes that she needs to meet his friends because how can she really know him, if she doesn’t know the friends he grew up with?

Kris Jenner comes to visit Chyna and tells her she would like to see the baby’s room, so she can buy them a crib or something. Chyna still hasn’t broken the news to her friend Paige, that she is going to have to move out. Kim calls Rob and he asks her to give him some parenting tips, and how to change diapers and how to swaddle. They joke about Rob buying Kim’s Bel Air house.

Rob’s friend, Adam sends Rob a text message, and blows Scott’s plans out of the water. Everyone is texting Rob and he does not want to do any of this, or see any of his old friends. Kourtney tells Rob to just do it and get it over with.

When Rob & Chyna continues, Rob is pretty angry with Scott for planning a get together behind his back. He explains to Scott how it stresses him and freaks him to the point that he wants to go into hiding. Scott says he wants him to be comfortable, and after a few minutes he will be fine. Rob says their friendships have stalled a few years back and how he has missed all the major life-changing events in their lives. Rob doesn’t want to spend all his time explaining his actions, and Scott should haver respected that. Scott tries to make jokes and entice Rob into doing the get together, but in the end Rob says no.

Chyna seems to be getting a little fed up with Paige. While out to lunch with a friend, Chyna is explaining how Paige was calling her a “hoe”, and she told her that once you have a baby, your “hoeness” gets deleted. She then asks for advice on how to tell Paige she needs to move out. That when Paige came to LA, she immediately moved into Chyna’s house and now Chyna is worried Paige will take the request the wrong way.

Chyna returns the favor and makes a “first date” picnic with Rob. They act like they are on their first date and ask each other questions. Chyna asks him if he thinks they will be getting married within the next year. He says yes and also agrees that they are going to work together to make good things happen between the two of them. Rob loves the corny picnic and thinks it has brought them a lot closer.

Kourtney and Rob are out and they are talking about college and how much they hated being in college so close to home. Both feel they missed out on the real “college” experience. They talk about Rob’s friends and how they all miss each other. Kourtney tells Rob to just get together and get over it with, that his friends don’t care about his looks, they just want to see him.

Rob decides to suck it up and lets the BBQ happen. He is allowing it to be at his own house, but the day of the BBQ, he gets super stressed. Chyna is super supportive. Scott and Kourtney arrive early to support him and keep him calm. Clearly Rob’s anxiety was unwarranted, when his best friends come to see him. They all meet Chyna and everyone goes to eat outside.

Chyna gives Rob his space, and stays in the kitchen, so he can have “alone” time with his friends. She really likes them. Kourtney is asking all kinds of questions, and Rob is able to explain himself with ease. At least he made the first step to rebuild those friendships.

Rob shows up at Kim’s house for “Baby Bootcamp”, so Chyna will be more secure if she needs to go out and has to leave the baby with Rob. She teaches Rob about swaddling, and he is a quick learner and you can see the excitement on his face.

Chyna brings lunch home for her and Paige, and she needs to tell her she needs to move out. When they talk about housing, Paige is fine with it, telling Chyna that she needed to grow up one day. Paige says they always knew this was doing to be temporary, so this is a huge relief off Chyna’s shoulders. Chyna and Paige then visit a sex shop where she wants to get something as a kinky reward for Rob.

After a successful BBQ with his friends, Chyna sneaks into Rob’s house and creates a “Fun Dungeon” for Rob, to show how proud she is of him. Chains, handcuffs and gag-balls, Rob keeps laughing. Chyna says she will only release him if she gets some booty!

Be sure to tune into E! to catch up on all the excitement and drama on Rob & Chyna. Check CDL for news, updates and spoilers!