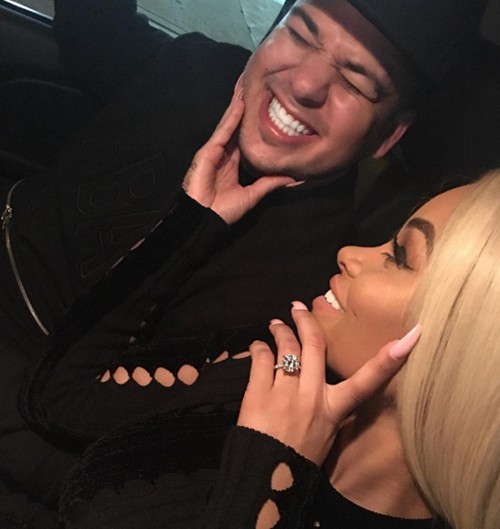 Rob Kardashian and Blac Chyna are officially engaged! Kris Jenner’s only son Rob has been dating Chyna, former stripper and baby-mama of Tyga, for just two months. But, the new couple has been pretty hot and heavy and there were already wedding rumors floating around. According to a new report, Rob Kardashian proposed to Blac Chyna on Monday April 4 – and she said “yes!”

TMZ is reporting, “Rob Kardashian popped the question Monday night, and they’re engaged to be married.” The site goes on to reveal, “Blac Chyna was sporting a massive diamond ring as she and Rob went out last night to celebrate.”

Blac Chyna’s mom Tokyo was in town for the festivities, and she reportedly went out to celebrate her daughter’s engagement with her and Rob at the Ace of Diamonds strip club. Not surprising, none of Rob’s family was on deck – they actually all jetted out of town yesterday (right before Rob proposed) for an impromptu family vacation.

It looks like the Kardashians are making it pretty clear that they are not supporting Rob’s engagement. Or maybe they have no idea he is engaged – and Rob decided it would be the perfect time to propose because his meddling sisters (who despise Chyna) weren’t there to give him a hard time or try to stop him.

Word on the internet for a few weeks now is that Blac Chyna is pregnant, not only has she been spotted not drinking and with a bit of a bump – but Rob Kardashian has been making cryptic statements on social media implying there may be a bun in the over.

So, are you excited for Rob and Chyna? Do you think they will actually make it down the aisle? Or will their engagement have a short shelf life? Share your thoughts in the comments below!