Rob Kardashian And Blac Chyna Having Babies Together – Kris Jenner Freaks Out At Crazy Possibility? 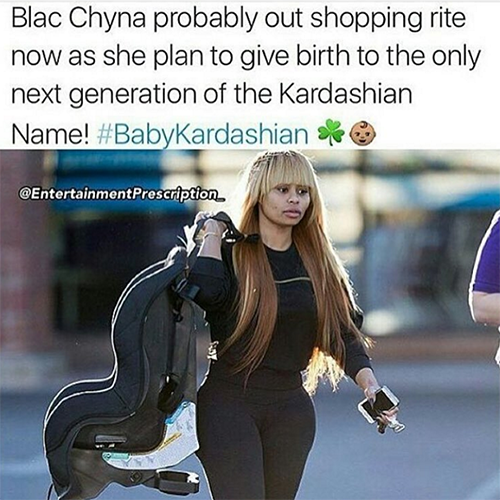 Rob Kardashian and Blac Chyna have been in the spotlight for their new relationship as of late, but has the Keeping up with Kardashians star taken it to a new level by having babies with Blac Chyna? Rob took to his Instagram page to freak out his entire family, if not the entire world.

We are praying that this is just a joke – and most likely it’s just a meme that Rob reposted (but why would he call attention to it?). Rob posted the photo of Blac Chyna carrying a carseat with the caption, “Blac Chyna probably out shopping rite now as she plan to give birth to the only next generation of the Kardashian Name!” #BabyKardashian

Can you imagine how mamager Kris Jenner must have lost her mind when she saw the post? Can’t you just hear Kim Kardashian calling Kris and flipping out? And what about Kylie Jenner? She’s got to be flaming pissed that her (half) brother would even consider dating Blac Chyna, much less procreating with her!

What is the deal with Rob Kardashian anyhow? Is his battle with diabetes inhibiting his ability to make sound judgement and decisions? Does he really not care what his relationship with Blac Chyna is doing to his family, especially Kylie Jenner.

She’s got to be beside herself and I would imagine that she is not even on speaking terms with Rob at this point. Where is Tyga with all of this going on? Is he supporting Blac Chyna (his babys’ mama) or is he on Kylie’s side and just a pissed?

What do you guys think about all of this? How much longer with this ‘thing’ continue with Rob and Blac Chyna? Weeks? Months? Can we hope for days, please? Who do you guys think would be a good match for Rob Kardashian? Who could bring some balance to the troubled reality star’s life? Something’s gotta give or we are going to see a legit headline with a legit baby bump to match. Good lord, make it stop!

Sound off in the comments below and don’t hold back! We want to hear what you really think about Rob Kardashian and his (hopefully prank) on his family!