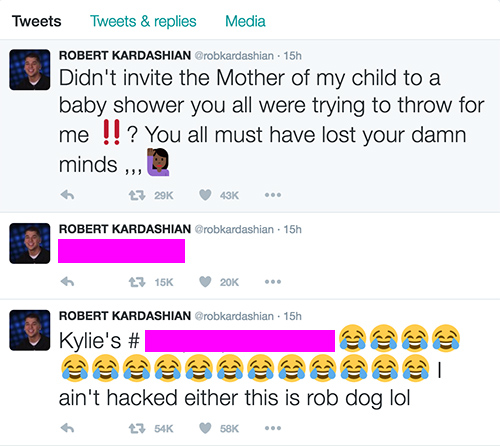 The coupling of Rob Kardashian and Blac Chyna was nice while it lasted. Unfortunately, the two reality TV stars aren’t exactly on the same page when it comes to their relationship, and both are quickly realizing that people find their story much more interesting when they’re surrounded by drama and turmoil. Most recently, Kylie Jenner fell into the lion’s den and was subjected to a rather childish move made by Rob when he decided to post her phone number on Twitter.

Rob posted Kylie’s digits on his Twitter account because his sisters reportedly failed to invite Blac Chyna, the mother of his unborn child, to a baby shower they threw for him. And he figured having his fans send thousands of unsolicited texts to his sister would be a highly mature and diplomatic way to acknowledge his distress.

In the message, he says, “Didn’t invite the Mother of my child to a baby shower you all were trying to throw for me? You all must have lost your damn minds ,,,”

Sure, the sisters probably should’ve invited Blac Chyna to the shower (just to say they extended the formality/courtesy), but reports via TMZ reveal that they had a legitimate reason for not doing so: Rob and Blac haven’t been talking to each other for months. Apparently, this was the reasoning behind the Kardashian sisters’ plan to schedule two parties – a HIS and HERs – to celebrate the future arrival of a new lil’ Kardashian.

Furthermore, Blac Chyna supposedly knew about the two separate showers and agreed that this would be the best approach to take given the state of her current relationship with Rob. Rob didn’t attend the shower that his sisters planned and, while he was enlightened on all of these details later, that didn’t prevent him from blowing a fuse.

It’s not often I say this, but, poor Kylie Jenner. Her phone must’ve been blowing up all day with crazy amounts of text messages. What do you make of Rob’s jab at Kylie? Do you think it was warranted or was it a childish, immature move on the adult reality TV star’s part? Leave your thoughts in the comments section below and keep checking CDL for all your celeb news and updates!

Didn’t invite the Mother of my child to a baby shower you all were trying to throw for me ‼️? You all must have lost your damn minds ,,,🙋🏿