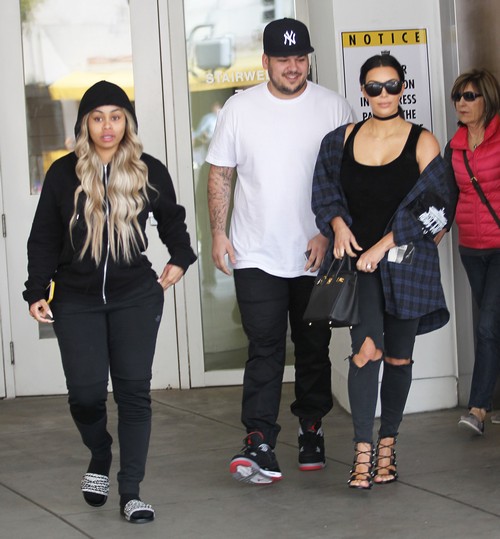 Rob Kardashian and Blac Chyna’s relationship is heading for a breakup if the rumors about Blac’s baby not being his are proved correct by a paternity test. There’s a new rumor swirling that the once reclusive reality star is worried that his fiance’s baby might not be his after all.

Will Rob Kardashian pull the plug on his engagement if he finds out that she is not carrying his baby? Did Chyna cheat on her fiance before announcing her pregnancy? Or worse, was Rob duped into thinking the model’s baby was his all along?

Of course, only the single mother herself knows the real truth as there’s strong speculation that Kim Kardashian’s younger brother is ready to dump Blac Chyna unless she comes clean about the identity of her child’s baby. According to the Daily Mail, sources close to the Kardashian family say that Rob might not be the real father because Blac Chyna has allegedly been seeing another man behind his back.

And while there’s no doubt that Rob is fuming behind closed doors over the rumors, his family, including mother Kris Jenner and sisters Kim Kardashian, Kourtney Kardashian, and Khloe Kardashian are concerned, too. After all, the entire family has never accepted the fact that Blac Chyna would be a Kardashian one day too, thanks to her engagement and pregnancy.

Kim especially has been cold and icy towards Blac Chyna as she along with her sisters fear that she might be using their brother for her own personal interests. After all, rumors of Blac Chyna seeking revenge on the Kardashians for Kylie Jenner’s romance with her baby daddy Tyga have been circulating for months now. No one doubts that she wanted to get back at Kylie Jenner for not only destroying her family, but her reputation, too.

What do you think, CDL readers? Did Blac Chyna indeed cheat on Rob Kardashian? Are headed for a break-up? Should Rob demand a paternity test? Let us know what you think by dropping us a line in our comments section below. Also, check back with CDL for more updates and news on all of your favorite celebrities and reality television stars right here.

Brand new episode this Sunday “Rob and Chyna” at 9pm on E! ☘ #robandchyna

Who are you watching Rob and Chyna with tomorrow 9pm on E! ? #RobandChyna