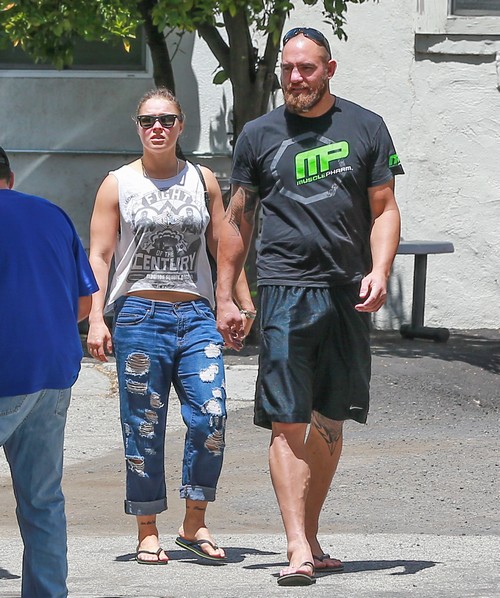 Ronda Rousey stalked Paige VanZant and swore at her during a VIP party when Ronda found out Paige had congratulated Holly Holm following her UFC win over Ronda. Fellow UFC fighter Miesha Tate gave all the details of Ronda’s foul-mouthed rant on ‘The Joe Rogan Experience’ podcast on May 5.

What happened? Paige approached Holly and congratulated her on winning the UFC 193 title fight against Ronda. No big deal, just one female UFC fighter giving props to another female UFC fighter. Apparently that’s not the way Ronda saw things.

Miesha Tate revealed to Joe that later in the evening Paige came over and told Miesha that Ronda had been storming around the event looking for Paige. Once Ronda found Paige she swore up and down, yelled at her for being disloyal and let loose with several F-bombs.

Paige was taken aback by the attack because, according to Miesha, she hadn’t been on the receiving end of Ronda’s furor before. Miesha wasn’t surprised at all by Ronda’s behavior -but Miesha Tate has never been a Ronda fan anyway.

TMZ reached out to Ronda’s representatives and they had no comment regarding Miesha’s story. However, TMZ did contact Paige about the Holly Holm congratulations controversy.

In Paige VanZant’s statement she said, “It appears that I offended Ronda by congratulating Holly after her victory. The incident was very shocking and totally unnecessary.”

This VIP event took place on April 27, that’s five months after Ronda was knocked out by Holly at UFC 193 in Australia. Ronda was felled early in the second round when Holly delivered a kick to Ronda’s neck. It was Ronda’s first UFC loss and ended her three year reign as champion.

Ronda Rousey stalking Paige VanZant at a party is a little over the top, don’t you agree? Get over it! Holly Holm won and deserves a little congratulations, even if it’s from someone who is Team Ronda. We bet Paige isn’t Team Ronda anymore!

Didn’t Ronda get engaged recently? Maybe she should spend more time planning a wedding and less time agonizing over her UFC 193 defeat where she was utterly destroyed by Holly Holm.

Ronda Rousey and her boyfriend Travis Browne were spotted after the gym grabbing lunch with their friend in Los Angeles, California on May 3, 2016 by FameFlynet