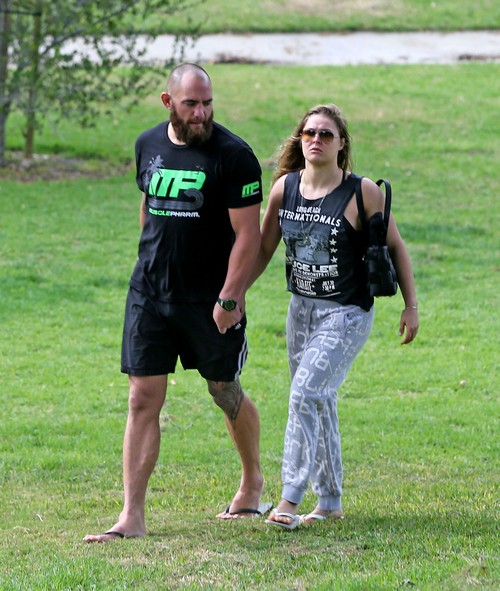 Ronda Rousey can start making wedding and baby plans! Boyfriend Travis Browne’s divorce from Jenna Renee Webb is final. Not only can Ronda and Travis get married whenever they want, the couple can get started on a family immediately.

The Browne-Webb marriage legally and officially came to an end on February 8. A judge signed the necessary paperwork ending the super short marriage. Jenna and Travis were married January 2015 – but by June of that year the couple was separated.

Adding to speculation that a wedding may be imminent, Rousey was seen wearing what looked suspiciously like an engagement ring in a promo for her Saturday Night Live appearance in January.

During a segment on a recent Ellen Show, Ronda admitted that the UFC fighter Travis was responsible for basically saving her life. Rousey explained that she was suicidal after losing the MMA title to Holly Holm. Sitting in the hospital, Ronda began to wonder exactly what to do and where to go after the fight and no one seemed to care.

That was when Ronda Rousey looked up and saw Travis Browne and thought, “I need to have his babies to stay alive.” Rousey revealed to Ellen that she probably wouldn’t have made it through the depression without Travis.

Travis’ now ex-wife obviously has a different opinion of Browne. As previously reported, Jenna Renee Webb made claims that Travis was physically abusive. The UFC did investigate the matter and the allegations were later found to be false. But not before Jenna Renee Webb posted photos on Instagram showing bruises on her legs, arms and face.

Though Ronda’s mother never specifically used Travis’s name in the tweets, one read, in part, “If all of your friends and family think someone is a d*****bag, he’s not misunderstood, he (or she) is a d*****bag.”

Are there wedding bells in Ronda Rousey and Travis Browne’s immediate future? Has the couple already begun trying for a baby? If Rousey is intent on having a baby will the MMA champion give up fighting all together?