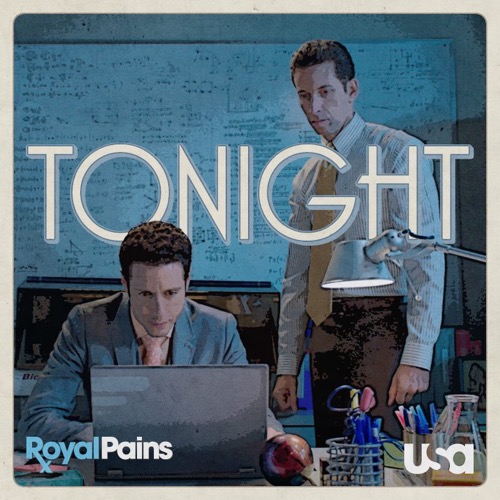 Tonight on USA Network ROYAL PAINS continues with an all new Wednesday, June 15 season 8 episode 5 called, “Saab Story,” and we’ve got your Royal Pains recap down below! On tonight’s episode, Hank (Mark Feuerstein) treats Keller when he goes overboard trying to keep up with the younger men at his firm.

On the last episode, in the series’ 100th episode Royal Pains recap, Hank worked in the ER for the first time in years and had difficulty following Evan’s orders during a quarantine situation that involved Jill. Did you watch the last episode? If you missed it, we recapped it right here for you.

On tonight’s episode per the USA Network synopsis “Hank treats Keller when he goes overboard trying to keep up with the younger men at his firm. Divya meets Hank’s beloved mentor, but when he’s nothing like his old self, Hank suspects there may be a medical cause to his changed personality. Meanwhile, Evan and Paige struggle with the demands of IVF, and Jeremiah creates a video for Divya’s baby shower.”

Tonight’s episode looks like it is going to be great and you won’t want to miss it, so be sure to tune in for our live coverage of USA Network’s “Royal Pains” recap at 10:00 PM EST! While you wait for our recap hit the comments and let us know what you think about the eighth season of Royal Pains so far.

Dr. Joseph Whitcomb was Hank’s mentor at med school and apparently the two remained on good terms because Hank felt it would only help Divya if she were in introduced to Joseph on tonight’s episode of “Royal Pains”.

Divya had back from John Hopkins and unfortunately she had been wait-listed by them. However, Hank didn’t want her to get that overly upset by it because he thought her second choice was just as good if not better. Divya had listed Stony Brook University as her second choice if John Hopkins didn’t work out and as it happens Stony Brook was actually a lot closer to the Hamptons seeing as it was still in New York than John Hopkins which happened to be in Baltimore. So Hank was actually hoping that Divya would go to Stony Brook.

Only Divya saw Stony Brook as less than. The school was still a great school, but it wasn’t where she wanted to go. So she was kinda of dumping on Stony Brook and the only way that Hank thought he could convince Divya that she was wrong was if she met his mentor. A man that Hank has always admired and who has done tremendous things in the medical field. And so Dr. Joseph Whitcomb who was a Stony Brook graduate was the best person that Hank could think of that would help Divya choose a school that wasn’t so far away.

Yet, Hank wasn’t the only one that didn’t want to let Divya go. Jeremiah was also going to miss her and, rather than convince her to give up on John Hopkins, he chose to focus on Divya’s upcoming baby shower. She was already heavily pregnant so he had wanted to do something nice for her before the baby came and that’s why he came up with the idea to shoot a very special video. The video was to have messages from all of Divya’s friends and in it they offer up the baby a special message.

So Jeremiah’s idea was actually pretty sweet. Although, Hank’s whole setup didn’t work out as planned. Divya had gone to see Dr. Joseph and the man had barely given her the time of day. He seemed disapproving that a young woman would enter medical school five weeks after giving birth and Hank’s recommendation didn’t do her any favors. Dr. Joseph was probably more disapproving of Hank’s newfound profession as a concierge doctor than he was of Divya’s situation. In his mind, concierge doctors aren’t real doctors.

Hank though had been surprised when Divya later told him that Dr. Joseph didn’t like either of them. He thought his mentor had been upset because of he wasn’t working in a hospital anymore so he had gone to pay his condolences over Dr. Joseph’s recent loss and he had also wanted to talk of he where he was at this time in his life. However, everything Hank including his condolences over Dr. Joseph’s wife had just upset the other man. He said that Hank had more promise than any other student he had ever taught and that he had welcomed Hank into his home because he thought Hank had been deserving of the effort.

And yet something strange happened while Hank was talking to Dr. Joseph. Hank noticed that his mentor was drinking a lot of water so he had tried to tell the other man that he thought was something was wrong however Dr. Joseph pretended like he was fine until he had passed out when he tried to walk away from Hank. So Hank then treated Dr. Joseph and got him the help he needed. His mentor had a condition that needed to be carefully monitored and he was also going to need continuous treatments before he could begin to feel better again. But by helping him, Hank was ultimately able to convince Dr. Joseph that he hadn’t thrown his life away.

Dr. Joseph said that Hank hadn’t lost his edge and he had even apologized for the way he had put Hank down as if he wasn’t a real doctor anymore. So the two men managed to mend their differences and Hank had honestly felt better about going back to Hamptons. Yet, Hank had a different patient waiting for him there that he simply could not shake. Keller had stopped by the house because he had been feeling off at first though he sort of refused to leave after Hank told him that he had problems with his heart.

Hank had told him that he had problems and he had also recommended a cardiologist that he knew. Though Keller took the news that he had heart problems to mean that he was old. So he began to mourn his youth and refused to leave Hank’s home until he too dropped right in front of Hank. Keller had gone into cardiac arrest and Hank had been left trying to reviving him when Divya came in for her surprise baby shower, but thankfully Divya was used to those situations so she offered her help at reviving Keller.

Keller though proved to be just fine in the end. He had been taking steroids so that exacerbate his heart condition. However, Keller later told Hank that he was going to turn his life around and by that he meant he was moving out to LA. He said no one gets old in LA so he thought that he could reclaim his “youth” if he went out there. Hank on the other hand knew better and merely chose not to say anything because he saw how happy Keller looked.

But after that fiasco with Keller, the gang did end up going back to Hank’s place and finally have a baby shower for Divya. Who loved Jeremiah’s video by the way and who had been all too happy to announce that she didn’t want to settle for Stony Brook even if she was still wait-listed at John Hopkins. So Divya was going to be sticking around for a while and she wasn’t leaving HankMed anytime soon.

Only Hank realized something about himself. He realized the reason he had gotten so upset by Dr. Joseph’s disappointment was because he hadn’t moved on with his life. He was still living in a guest house and he hadn’t actually put down any roots in the Hamptons. So when Hank’s car broke down in front of a house for sale, Hank couldn’t resist. He called the realtor and asked if the house on Henry’s Place was still free.

And as Hank is finally putting down roots so is Evan. Evan and Paige are going through IVF and Evan managed to brave his fear of needles in order to be there for his wife.