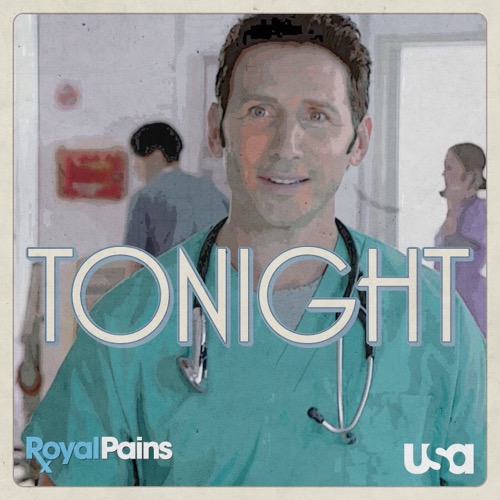 Tonight on USA Network ROYAL PAINS continues with an all new Wednesday, June 8 season 8 episode 4 called, “Doubt of Africa,” and we’ve got your recap down below! On tonight’s episode in the series’ 100th episode, Hank (Mark Feuerstein) works in the ER for the first time in years and has difficulty following Evan’s (Paulo Costanzo) orders during a quarantine situation that involves Jill.

On the last episode, Hank found romance while in Hong Kong trying to prevent the theft of Boris’ medical records; Divya treated a repo man whose target was a yacht. Did you watch the last episode? If you missed it, we recapped it right here for you.

On tonight’s episode per the USA Network synopsis “in the series’ 100th episode, Hank works in the ER for the first time in years and has difficulty following Evan’s orders during a quarantine situation that involves Jill. In other events, Jeremiah bonds with a patient; and Divya worries about Lena.”

Tonight’s episode looks like it is going to be great and you won’t want to miss it, so be sure to tune in for our live coverage of USA Network’s “Royal Pains” at 10:00 PM EST! While you wait for our recap hit the comments and let us know what you think about the eighth season of Royal Pains so far.

There was a summer cold going around the hospital on tonight’s episode of “Royal Pains” and unfortunately the hospital was left incredibly short-staffed because of it. So Evan hadn’t known what to do. He tried to calling in doctors that were on shift in, but they too were ill so he was kind of left in an uncomfortable position when his brother Hank finally decided to step up. Hank had offered up his own services as a doctor to help out the hospital and later Jeremiah had agreed to cover for him with his HankMed patients.

However, it wasn’t easy for Hank to go back to working in a hospital. Hank had apparently gotten used to doing things his way and handling everything himself so he eventually found it hard to delegate. A patient came in with a nasty wound on their forehead because they had suffered a fall after feeling so Hank wanted to diagnose the patient and even do the patient’s stitches. And he couldn’t do that. So Hank had first been told by his ER Nurse and then by his own brother who both felt that he wasting valuable time in the Emergency Room.

Only Hank didn’t care what either of them said. Hank knew that it was only right to spend a few additional minutes with each patient if it could save their life so that’s what he tried to do with everyone even if it did slow him down. And more than once, as time went on, he figured out what was wrong with the patient without hurting them or letting them needless hours waiting for a specialist to see them. So while Evan may not have liked it, he did come to see that Hank’s turnover didn’t matter as much as patient treatment.

Hank’s first patient who had passed out was later proven to be anemic and Hank had figured that out after a short conversation. So Evan later decided to ease up on his brother and that had allowed Hank to do what he does best. Yet, while Hank excels with patients, there was just one person that kept falling under his radar. A young woman by the name of Lena Crawford had seen several HankMed associates and no one thought it was weird that they had yet to meet her guardian or at best an adult that knew her. That is, until Jill.

Jill came back into town and she wasn’t staying for long. So Jill had asked to see Divya and Hank for lunch and it was while they were all together that Divya saw Lena walking by. Divya it seems had recently treated Lena for pancreatitis, but Hank said that Lena hadn’t mentioned that condition when he had seen her in the ER. And therefore the two worked together to get Lena to go back to ER in order for them to make sure that one of her conditions wasn’t exacerbating the other. Although, the hospital turned out to be the worst place to take a patient when it suddenly went into quarantine.

Evan had ordered quarantine protocols to go up when he had talked to Jill’s friend that appeared to be suffering from a fever and found out that the young man had recently visited Sierra Leone. Sierra Leone was still dealing with Ebola and it was considered policy to quarantine any patient that had a temperature and that had recently visited an infected area. So Evan was doing his job when he put Jill’s hunky friend Hans in a cordoned off area however Hank thought Evan was overreacting. Hank had thought that Evan was blowing things out of proportion so he tried to get Evan to desist only nothing he said worked.

Hank had thought that if he told his brother that Hans wasn’t systematic that Evan would relent with the protocols, but Evan ignored him and that just reminded Hank why he hated the bureaucracy of a hospital to begin with. However, Evan was later shown to have a point when he sectioned off Hans. Hans begin to show symptoms such like an enlarged eye that had redden and his temp went up to 102. So Hans was showing symptoms that commonly are associated with Ebola.

Yet, the symptoms weren’t working in order. Hans for instance had gotten the eye condition before anything else and normally that’s a condition one would get towards the end instead of the beginning. So Hank came to believe that Hans was suffering from something else and, once Evan told him he was free for the night because the regular ER doctor had come in, he decided to enter quarantine to check up on Hans. And he also ran several tests while he was at it. Hank thought that Hans was suffering from an infection so he ran the one test that could prove it and it turns out Hans never had Ebola.

His symptoms came about because of something else and having Hank around to prove that eventually saved the hospital thousands of dollars in having to move stuff around. So Hank had technically saved the day when he risked his own health to treat a patient though he still ended up in a fight with Evan. Evan had gotten angry that Hank had questioned orders in front of a nurse and Hank had gotten angry that Evan had called quarantine in the middle of his ER. But in a way both men were in the wrong because one of them failed to follow hospital rules and the other had almost called in the CDC before he could confirm that they were dealing with Ebola.

So the whole fight had mainly been a waste of time yet in spite of their differences Evan did handle the Lena problem. Evan had realized that Lena was lying to everyone about an aunt because she wanted to take care of her brothers by herself so he called social services which is what the others should have done when they noticed a problem. Though with everyone else at HankMed out for the day, Jeremiah got to enjoy the day with his favorite author.

Cindy wrote a bunch of fantasy novels and it seems that she had condition that was going to take time away from writing her next book in the series. So Jeremiah decided to cheer her up and he later took her to a small convention where they could blend into the crowd of her fans. And there they got to simply enjoy being nerds for a day.

And as for Hans, there was no need for Hank to feel jealous of the man because Hans was gay!