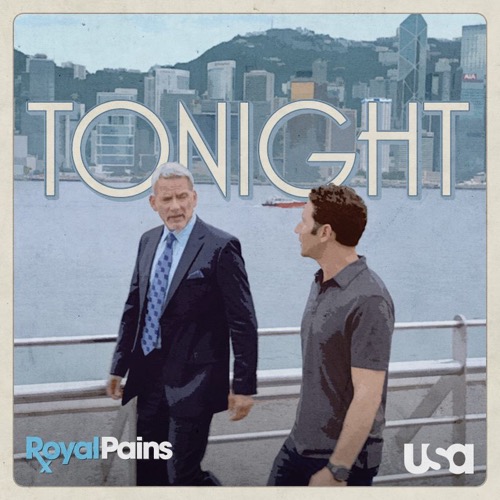 Tonight on USA Network ROYAL PAINS continues with an all new Wednesday, June 1 season 8 episode 3 called, “Fly Me to Kowloon.” We’ve got your recap down below! On tonight’s episode, Hank (Mark Feuerstein) finds romance while in Hong Kong trying to prevent the theft of Boris’ (Campbell Scott) medical records.

On the last episode, Hank treated a stuntwoman on the set of a film that’s said to be cursed. Evan dealt with the fallout from the cyber-attack on Hamptons Heritage as Diana Underhill’s hacked medical records become national news. Did you watch the last episode? If you missed it, we recapped it right here for you.

On tonight’s episode per the USA Network synopsis “Hank finds romance while in Hong Kong trying to prevent the theft of Boris’ medical records; Divya treats a repo man whose target is a yacht; and Paige convinces Evan to rethink their parenting path.”

Tonight’s episode looks like it is going to be great and you won’t want to miss it, so be sure to tune in for our live coverage of USA Network’s “Royal Pains” at 10:00 PM EST! While you wait for our recap hit the comments and let us know what you think about the eighth season of Royal Pains so far.

Once Hank had heard that little Carlos had inherited Boris’s family’s disease, he knew that he had to become involved with Carlos’s care.

Hank had gotten to know Boris’s own as well as his family’s history with the disease. So he also knew how debilitating it could be and that Carlos was going to have a fight ahead of him if his symptoms ever manifested. However, wanting to become involved and actual doing so were two very different things. Especially as it was revealed that Carlos wasn’t exactly nearby seeing as he was in Hong Kong with his mother.

But Hank was willing to travel the distance to see the little boy. So it was something of a surprise to him when Boris’s first stop hadn’t been at the family home which was where Carlos was supposed to be, but it seems like Boris was back to his old tricks when he had instead taken Hank to a business meeting at the KJR Seminar. The seminar was where Boris wanted to announce the new drug that his company had finished testing and he had wanted Hank there as well so that Hank could testify to the drug’s properties.

As Boris’ own physician, Hank was in the best position to talk about the drug that had saved Boris’s life and he could also answer any following questions. Such as whether or not Boris would ever experience a relapse. And if he’s still capable of maintaining the same pace in the business world as he has before. So Hank, who had traveled thousands of miles just to see the little boy for what was essential a check-up, had been thrown into the deep end of the business world and there soon wasn’t time to see Carlos right away.

Yet, oddly Hank managed to make time for romance. Hank had funnily enough run into one of Boris’s main competitors in pharmaceuticals and he had ditched the rest of the conference and Boris too in order to spend time with the mystery woman he had met there. So the same Hank that rarely plays hooky had gone on to play hooky in Hong Kong. All the while HankMed were busy covering for his loss.

With Hank gone, everyone had to pitch in and Divya was clearly not resting her very pregnant feet as she had to treat the company’s latest patient. A man by the name of Win had needed to be seen by someone with flexible hours yet Win wasn’t the man that Divya thought he was. She had first met him as he was apparently stealing someone’s plane and so she had pretty much written him as a thief that needed a quick checkup when he surprised her. Rather than running away like the thief she thought he was, Win later stopped by the house because he thought his summer flu was worse than he thought.

Win as it turns out was not a thief, he was a repo man. So earlier had been repossessing the plane and he needed Divya’s help because he was about to catch the white whale of his career and couldn’t afford to be sidelined at the last minute. There was this one woman that has always been one step ahead of him and her creditors so Win wanted to catch her while he could and he had hoped that Divya could give him a quick cure for a hundred-degree fever. However, there was no such thing.

Divya couldn’t “cure” him for such a fever and she didn’t want to give him something for a simple flu because she suspected that there was something else wrong with him. So she had gotten Win to agree to a full workup yet she couldn’t get him to come back once the initial findings couldn’t spot anything. But Evan had surprisingly helped her diagnose Win with what was really wrong.

Evan, it seems had been overseeing the latest construction at the hospital. So Divya had overheard complaining about all the dust and how he reminded the crew that they really should be wearing protective gear else they risk breathing that all in so that’s when she made a connection between the crew and Win. Win often had to cut through chains in order to repossess whatever he had been ordered to and odds are that he hasn’t been wearing protective gear while he did so. And therefore, Win was suffering from Metal fume fever.

Metal fume fever or MFF could build up fluid in the lungs and bring about fatal fever if not watched properly. So once Divya had diagnoses Win, she then had to hurry and try to save his life. But Win had been in dire condition when Divya later found him. He had apparently missed the white whale again because he had felt dizzy and his dizziness made him accidentally cut off his own finger.

Although, luckily for him, Divya found that finger floating in the ocean so she was able to rush both man and finger to the hospital. Where they were eventually reattached. So Divya had actually saved Win’s life and she had done so with Evan’s help. Only she couldn’t really return the favor to Evan later at dinner. Evan and Divya had gone a double date with their spouses and at first it had been fine, but then Divya and Paige swayed Raj into talking about his IVF experience. And that conversation ruined dinner.

Divya and Paige had wanted Raj to talk about his experience with IVF as a way to convince Evan to try it though their plan failed when Raj became too honest about his experience. Raj had talked about how horrible it was to have a wife driven crazy on hormones and how demeaning it was to go into a depository room. So Paige and Divya had quickly gotten Raj out of there. Yet, they thought the damage had been done.

And it turns out Evan had no problem with IVF. Evan had apparently known that his odds in conceiving naturally with his wife weren’t high so he has always been open to IVF. But he hadn’t said anything to Paige because he had wanted that to be her call seeing as she was the one that would be taking all the drugs. So once he had told her that, Paige said she shouldn’t underestimate him and agreed to trying out IVF.

However, over in Hong Kong, Hank was quickly pulled away from his dream woman and back into whatever game Boris was playing. Boris, it seems had wanted to draw out the interested party that had stolen his medical records. So he and Hank had used a trick to lure a third party who acted as an in-between. And they got him to deliver a fake blood sample to his boss in order to find out what this boss was willing to do to get information on Boris.

And while Hank had helped and had even gotten a chance to check up on Carlos, Boris had put him on a plane heading home without telling him the full story of who he suspected.