BY Kristine Francis on May 25, 2016 | Comments: one comment
Related : Recap, Television, TV 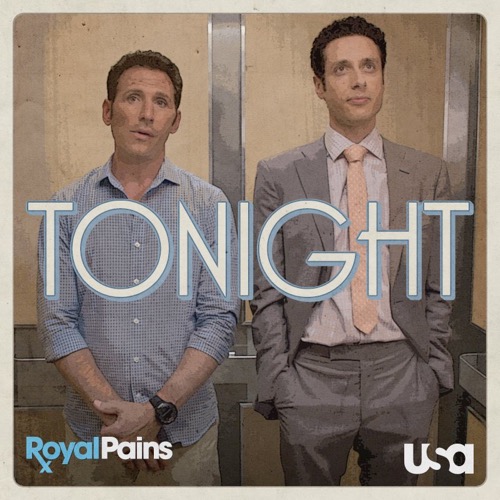 Tonight on USA Network ROYAL PAINS continues with an all new Wednesday, May 25 season 8 episode 2 called, “Palpating the Orbital Rim,”  and we’ve got your recap down below! On tonight’s episode Evan deals with a cyber-attack on Hamptons Heritage when Diana’s hacked records go viral.

On the last episode, in the Season 8 premiere, Hank treated a politician; Divya’s future hit a roadblock; Jeremiah returned, but struggled with his first patient. Did you watch the last episode? If you missed last week’s episode we have a full and detailed recap, right here for you.

On tonight’s episode per the USA Network synopsis, “Hank treats a stuntwoman on the set of a film that’s said to be cursed. Evan deals with the fallout from the cyber-attack on Hamptons Heritage as Diana Underhill’s hacked medical records become national news. When Jeremiah’s parents come to town, Divya helps the family work through their differences. Meanwhile, Hank and Jen go on their first date but things don’t go as planned.”

Tonight’s episode looks like it is going to be great and you won’t want to miss it, so be sure to tune in for our live coverage of USA Network’s “Royal Pains” at 9:00 PM EST! While you wait for our recap hit the comments and let us know what you think about the eighth season of Royal Pains so far.

Boris was back in town on tonight’s all new episode of “Royal Pains” though like usual he failed to notify anyone he was coming back and it turns out that he hadn’t come by for a short visit.

Apparently the secret was out and Boris had heard that someone had hacked the hospital so the real reason Boris was in town was because he felt he had to clean up after Evan’s oversight and make sure that Evan didn’t commit even bigger by keeping the hack a secret. Evan it seems was originally going to cover up the hack so that neither the patients or the doctors were sent into a panic over nothing. And seeing as the IT department still had no idea who was behind the hack much less why they were hacked, telling people about what happened would have merely have made people lose trust in the hospital.

Yet, Boris was of a different opinion. Boris felt that the hospital staff as well as the patients needed to know that their information was at risk. So that way they could be proactive in protecting themselves and address whatever they have to head on rather than be caught off guard. And so everyone had been told about the hack, but all of the anger stemming from that somehow managed to land on Evan.

Evan had been the one in charge of the hospital. So Boris had actually told him that once he reviewed the situation, he was going to a make a decision on whether or not to fire Evan. But Evan didn’t want to lose his job so he tried to make amends with as many people as he could. Including Diana Underhill whose information was leaked to the press which was the one thing that both Hank and Evan had promised her wouldn’t happen.

Only as Evan was being threatened by the woman running for Senate who swore that she would paint Evan as the villain in her story, Hank was off on a set. Hank had ended up catching a filming crew while they were shooting a horror movie although while he was there he noticed that they didn’t have a doctor on set. So he volunteered his services once he saw for themselves all the dangerous they were taking with their stunts.

But leave it to Hank to join a movie crew that was working on a cursed movie. The person that was driving the movie was Rachel and she wanted to pick up from where he dad left off after he tried to make the movie years ago. Only people had said that the movie was cursed after her dad ran into several problems such as actors getting injured, things disappearing, and then running out of will to make the one film.

So with that as part of its history, it ended up being a good thing that Hank joined the crew. Hank was there when Rachel suffered a nasty fall during filming and he had wanted to run through all the necessary tests with her, but she had kind of shut him down. She said as long as there was nothing wrong with the preliminary test than she was fine to go back to work. And unfortunately, there was nothing that Hank could say to her that would make her want to run even more tests.

But Evan and Boris had later come to an understanding. Boris had realized that he had been overly harsh with Evan so he had apologized for it though Hank had asked him what had set him off and it turns out that Boris’s son Carlos had inherited the family curse. Carlos was currently going through pediatric treatment for the disease so Boris wanted to remain hopeful yet it was making him testy because he wanted to be with his family during treatment rather than dealing with a hack.

Only Evan fixed the problem with the hack because his IT guy eventually traced it back to Diana Under, herself.

Diana must have realized that she couldn’t keep her condition a secret forever so that’s when she arranged things. She had her people deliberately release her files so that she could spin the story to her own advantage. So now Diana is on every new channel and she has the people’s sympathy for not only her condition but also from the hack that had supposedly violated her right to privacy.

So Evan made a choice about Diana. He had the opportunity to expose what she did and paint her as the bad guy however he chose to tell Diana that he has something on her and then proceeded to make a deal with her. Diana could milk her situation, only she couldn’t blame the hospital or Evan who she would now go on record to say had been there for her in her time of need. And so Evan had put an end to her threats without anyone losing face, but then he had to pass on the bad news to Boris.

Diana had merely taken advantage of the hospital being hacked yet she hadn’t been behind it because only one person’s file was hacked into and it wasn’t her. It was actually Boris. Someone had hacked into the hospital because they were looking for Boris’s medical records and nothing good could from that. Especially as the last time someone had snooped into Boris’s health, they had nearly killed him.

As for Hank, though, he finally diagnosed what was wrong with Rachel and it turns out she was going to need surgery for a trapped nerve. The nerve had been exacerbated by the special contact lenses she wore that would slow down her heartbeat. So Hank told her that the movie was going to have to be put on hold until her surgery and then he had been happily announced that now that they knew what was wrong that they could finally forget about the whole curse thing. But right after he said that the car they were using on set had rolled into the water while no one was looking.

And so Hank had blamed himself for the car wandering into the ocean, but he thought his luck was turning around when he went on his first date with Jen. Only the date was a disaster and it turns out they lack chemistry when they weren’t talking about her son Sam or other safe topics. So getting to know each other definitely put an end to the fantasies.

So Hank found himself free when Boris had asked him to come with so that Hank could check out Carlos’s condition himself.

However, Divya had later supported Jeremiah through his problems with his parents. Divya had apparently talked to the older couple who she found to be lovely and so she realized that they weren’t the problem. Jeremiah’s parents did care about him and they wanted to fix the estrangement. So it was only Jeremiah that doubted his parents loved him and oddly the reason he doubted them was all because of a dog.

Jeremiah had thought his parents had gotten a dog because they realized he wasn’t going to be much of a companion for them. Yet, the real reason they had gotten Buddy (who had come before their latest dog Rosie) was because they wanted Jeremiah to have a friend instead of just them. So the truth ended up coming out after Jeremiah helped Buddy deliver her puppies and, now that he no longer hates dogs, as a rule, he decided to take one of the puppies home with him so that he could have that constant friend.

And you know Divya didn’t judge him for all the misconception so she really is a good friend.