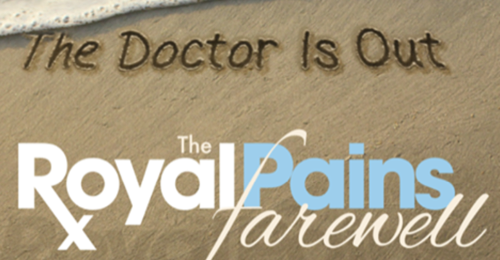 Tonight on USA Network ROYAL PAINS continues with an all new Wednesday, July 6 season 8 series finale called, “Uninterrupted,” and we’ve got your Royal Pains recap down below! On tonight’s episode in the series finale, Boris, (Campbell Scott) who is planning to leave the Hamptons, asks Hank (Mark Feuerstein) to join him.

On the last episode, at Eddie’s wedding, Hank helped a theater legend who’s experiencing confusion and memory loss; and he reconciled Eddie and Evan before the ceremony. In other events, Paige and Evan awaited the results of a pregnancy test. Did you watch the last episode? If you missed it, we’ve got your Royal Pains recap right here for you.

On tonight’s episode per the USA Network synopsis “in the series finale, Boris, who is planning to leave the Hamptons, asks Hank to join him; Hank contemplates life changes; Evan and Paige consider a life-altering decision; and Divya receives long-awaited news.“

Tonight’s episode looks like it is going to be great and you won’t want to miss it, so be sure to tune in for our live Royal Pains recap 9:00 PM EST! While you wait for our recap hit the comments and let us know what you think about the eighth season of Royal Pains so far.

Boris was back in town although allegedly not for long this time. Apparently, Boris and his family were going to go into hiding for a while because his many enemies were seeking ways to undermine him by any means necessary and surprisingly it seems that Boris didn’t want it to be just him and the family on tonight’s episode of “Royal Pains”. He also wanted his almost good friend Hank to join them. And for some reason, Hank was seriously considering it.

Hank had come across Boris sneaking around his own mansion one day. So the two of them had it because Hank (who has always been curious) had wanted to know what was going on however Hank later proved to be more than willing to help Boris and that’s he assisted with destroy Boris’s medical records. The same medical records that Boris’s enemies have tried to use against him before. Yet, Boris had shocked Hank when he suddenly made that particular offer. Hank and Boris have been on plenty adventures before, but he hadn’t thought that Boris would want him to join him hiding or for that matter that it would sound so appealing.

But it was and Hank couldn’t help thinking about it. Hank had recently realized that not much hasn’t changed for him since coming to the Hamptons so he was already looking for a change when Boris made that offer. And to be frank it was a tempting offer. Travel the world with a mysterious billionaire that would fit the bill for everything was a unique opportunity. So Hank had to think about and for a while he almost said yes. For there had been that moment when he did decide to pack before he quickly changed his mind and realized that he would be missing too much if he left for the unforeseeable amount of time.

Divya it seems had finally gotten into John Hopkins. So his friend was going to become a doctor and his brother Evan was about to start a family with Paige. However, what no one knew at that time, was that Evan and Paige had been discussing more than their pregnancy. They had apparently kept in close contact with a young girl that was secretly trying to raise her brothers on her own without Social Services finding out. And it appears that the kids’ aunt has continuously refused to attend a temporary custody hearing so there were still three kids that needed a home though Paige and Evan have been wondering if maybe they could take in kids.

Paige herself is adopted so she knew how much having her parents in her life helped and that made the idea of taking the kids not too far-stretched. Though, before she agreed to anything, Paige wanted to meet the kids and fortunately for her Evan had already agreed to a meeting. He had sort of set it all up so that they could meet the kids in safe and easygoing environment for them. And that had taken the pressure off. So the rest had been smooth sailing although nothing would have mattered for them after Paige meet the kids.

She met them and just knew that she had to help so both she and Evan offered Lena a way for them to stay all together. Paige and Evan told Lena that they could foster them at first and that would keep them from staying in the system. But who knows what would happen afterwards because both Evan and Paige were set on making their new family work out. And it was for that reason that Evan thought he should start freeing himself up at the hospital.

Evan later told Hank that he had to concentrate on his family and so he had asked Hank if he would come back to the hospital. He admitted that working together hadn’t been that great some weeks ago, but he thought that would be different if Hank gave him a second chance. Although before Hank made any decision about that, he told Evan that Boris was gone. Boris had left town because the people that were trying to find him were not enemies. They were actually loyalist that wanted Boris to take over in Russia which is something that Boris didn’t want to do.

Though before Boris skipped town for what claimed was the final time, he had apparently left his house in the Hamptons to Evan. So that gigantic house called Shadow Pond was now Evan and his family’s. And Hank also didn’t have to feel bad about turning down that job at hospital because he knew Evan was in a great place.

And what with Divya leaving and Jeremiah there to oversee their many patients, Hank decided to go to Africa and win back Jill. Jill however, didn’t need that much convincing because three years later and she was in the Hamptons with Hank, Evan’s full house, and HankMed was still up and running. But now with three doctors because Divya did come back after Med school.