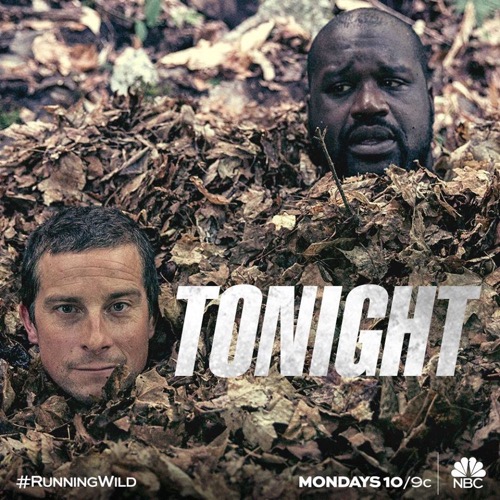 Tonight on NBC their show RUNNING WITH BEAR GRYLLS airs with an all new Monday, August 29, season 3 episode 4 called, “Shaquille O’Neal” and we’ve got your Running Wild with Bear Grylls recap down below. On tonight’s episode Shaquille O’Neal joins Bear in the Adirondack Mountains of Upstate New York.

On the last episode, Courteney Cox joined Bear in Ireland, where they climbed jagged peaks, descended cliffs, battle the cold and feast on maggots. Did you watch the last episode? We’ve got a detailed Running Wild with Bear Grylls recap right here.

On tonight’s episode per the NBC synopsis “Shaquille O’Neal joins Bear in the Adirondack Mountains of Upstate New York, where they deal with dense forest, leeches and steep cliffs.”

Tune in tonight at 10PM EST and let us know what you think. Join us for our Running Wild with Bear Grylls recap tonight. Hit up the comments and let us know your thoughts about this cool show!

Tonight’s episode of “Running Wild with Bear Grylls” features Shaquille O’Neal in a co-adventure in the Adirondacks.

Shaquille boards a train and heads into the mountains. Bear instructs Shaq to climb on top of the freight train where he picks up the NBA star via helicopter. The two venture deep into the Adirondack mountains. Bear and Shaq jump off the helicopter and land in a lake, beginning their adventure with a splash. Shaq is given a grappling hook to carry and the two journey west in the direction of the extraction point. Bear notices right away that, instead of going around the trees and other foliage quietly, Shaq barrels through the forest “like a rhino,” knocking over everything in his way. Bear shows Shaq how to shoot the grappling hook up over a solid rock wall. Shaq’s enormous size and considerable weight create a challenge as he attempts to scale the wall. Once he completes the climb, he sits down with Bear and talks about his childhood.

Bear discovers a fresh placenta and tells an unimpressed Shaq that it will be their dinner later. The two then being to prepare their camp for the evening: Bear informs Shaq that instead of a more traditional shelter, the two will be sleeping buried in leaves. Bear makes a fire and then prepares the placenta on a rock. As the two adventurers wait for the placenta to cook, they discuss Shaq’s NBA career. While Bear eats his portion, Shaq discreetly throws his into the trees. The two then huddle down into the leaf pile for the night.

In the morning, the two set off again towards their extraction point. As they walk, Shaq shares his ambitions to become a police officer in hopes of bridging the gap between the police force and the citizenry. Shaq continues to struggle with climbing up the mountainous terrain because of his 7’1” frame. Bear devises a plan to lower Shaq down a sheer cliff face and the basketball star is extremely doubtful that Bear can support his weight. After a few close calls, both adventurers make it down the wall unscathed. The two make it to the extraction point and are safely transported out of the Adirondacks.

Despite the difficulties presented by his size, Shaq was able to defeat the challenges of the mountains including scaling rock walls, sleeping in leaves and even eating placenta. With Bear Grylls by his side, the Adirondacks didn’t stand a chance against the 7’ 1” NBA star.