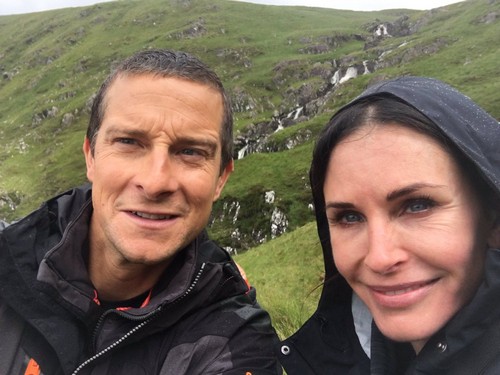 Tonight on NBC their show RUNNING WITH BEAR GRYLLS airs with an all new Monday August 22, season 3 episode 3 called, “Courteney Cox” and we’ve got your Running Wild with Bear Grylls recap down below. On tonight’s episode Courteney Cox joins Bear in Ireland, where they climb jagged peaks.

On the last episode, Nick Jonas joined Bear for a snowy mountain adventure in the Sierra Nevada during blizzard conditions. The guys rappelled down a sheer cliff, ate a frozen bird and swam across a freezing lake. Did you watch the last episode? We’ve got a detailed Running Wild with Bear Grylls recap right here.

On tonight’s episode per the NBC synopsis “Courteney Cox joins Bear in Ireland, where they climb jagged peaks, descend cliffs, battle the cold and feast on maggots.”

Tonight’s episode of Running Wild With Bear Grylls features Friends actress Courteney Cox. Courteney heads to a castle in Ireland where she is supposed to meet up with Bear. She was excited to come to Ireland because she is looking forward to experiencing something new, and interested in learning more about Ireland because that is where her boyfriend Johnny McDaid is from.

Bear picks Courteney up via helicopter, and they land on the hillside, the Friends actress is strapped in to her hiking gear. They make their way down the steep hills and navigate through a rocky creek. Courteney whines about the moss and how slippery the rocks are. The cliff starts to get steeper and Bear ties Courteney to him with their cord in case she falls.

Bear and Courteney come to a little bump in their trip – there is a huge drop and they are going to have to jump across it. Bear uses his anchor to propel down the cliff and hop over first. Then he sets up a zip-line so that Courteney can get across. It’s an 80 foot drop and Courteney is freaking out, but she finally makes it across.

She and Bear take a breather, they sit in the rain and chat about her gig on Friends as Monica. Courteney confesses that getting older in Hollywood is hard, she has decided to age gracefully and just accept it and “Let it be.” Courteney doesn’t exactly use the words Botox or plastic surgery, but it is pretty clear that is what she is referring to.

The rain is coming down hard, so Courteney and Bear decide to continue their journey. Courteney s a little concerned when Bear starts talking about finding them some dinner and finds a dead sheep in a bog. Courteney is appalled when Bear announces that they are going to eat the dead sheep, but she help him drag it out of the water.

They don’t know how long the sheep has been dead, so it may not be safe to eat, Bear makes Courteney use a knife to cut open the dead sheep. It’s full of maggots, and Courteney is relieved because she thinks that they don’t have to eat it. But, Bear announces that they are going to eat the maggots because they are full of protein.

Courteney is feeling a bit nauseous, and promises to eat the maggots later. Bear makes Courteney cut the sheep’s testicle sack off so that they can take some of the maggots with her. And, somehow she manages to do it without throwing up all over.

Bear and Courteney head up the mountain a little bit farther and then they set up camp. Courteney has some hairspray, Q-Tips, and Lip-Balm in her purse and Bear uses it to start them a fire. Bear isn’t going to let Courteney go to bed without eating her maggots though, he puts the them in a cup to boil them. While they are waiting, Bear and Courteney bond and discuss how Courteney’s father passed away from cancer. Before they head to bed, Courteney finally eats a maggot.

In the morning, it is still raining, an the wind is blowing so hard that it is nearly blowing Courteney over. They hit the trail and start hiking. They finally make it to their final destination, a cliff over looking the sea. Bear says that once they scale down to the bottom – they will be extracted. Courteney is horrified by how steep the cliff is.

She has a meltdown and clings to the cliff for a few minutes and whines that she is sick to her stomach. Bear sits down with her and gives her a pep-talk and reassures her that they are going to be safe.

After some emotional chats, Bear convinces Courteney to scale down the side of the mountain with him. When they make it to the bottom, the waves are crashing pretty hard, and they have to make their way over some slippery rocks until they finally arrive on the beach and can be extracted by the helicopter.
Bear is impressed by how well Courteney did, and raves that she showed so much courage as they board the helicopter to head home.