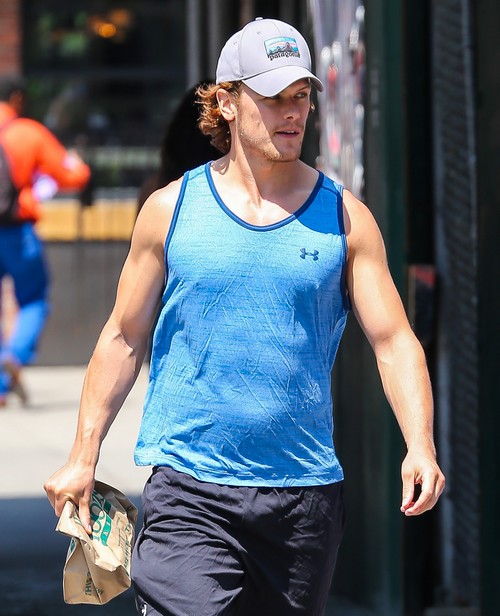 Sam Heughan and Caitriona Balfe are no doubt the hottest co-stars on the small screen right now. In fact, it’s been long rumored that ‘The Outlander’ stars are also having an off-screen romance as well, given their strong chemistry both on the show and in their interviews and red carpet appearances, too. With all the speculation about their romance, are they finally ready to admit they are indeed dating one another too?

Sam Heughan fueled the romance rumors once again by referring to his co-star as his wife in a recent tweet of his. The Scottish-born actor wrote, “Congrats too the wifey and thanks to the strong fan vote!” after it was announced that Caitriona won Outstanding Lead Actress in a Drama Series in Entertainment Weekly’s Poppy Awards.

Surely, no actor will call his co-star his “wifey” unless he truly means it or is indeed serious about their relationship. While there’s no doubting that Sam is an actor who loves to use his charm both on and off screen, no man will call another woman his wife unless they are serious about one another. Clearly, Sam Heughan and Ciatriona Balfe are more than just friends and co-workers.

In fact, some of his own Twitter followers have even responded to his tweet with, “You should really put a ring on it before someone else does,” along with, “You sure are one lucky husband.”

Even though ‘The Outlander’ co-stars keep teasing their fans with their off-screen flirting and the obvious sexual tension between them, both Sam and Caitriona have refused to set the record straight about their true feelings for each other. Surely, the actors know that revealing the truth about their possible romance could jeopardize their roles as James Fraser and Claire Fraser on the massively popular Starz series.

Clearly, they don’t want to make the same mistakes that Robert Pattinson and Kristen Stewart or Andrew Garfield and Emma Stone have made before them. Dating your co-star might work for some couples, like ‘True Blood’ alums Stephen Moyer and Anna Paquin, but that doesn’t guarantee that it will work for everyone.

Tell us CDL readers, do you think Sam Heughan and Ciatriona Balfe are trying to hide their romance because they don’t want the truth about their relationship overshadow the success of ‘Outlander?’ Or do they just want to keep fans guessing in hopes that they will continue to tune in to the series?

Let us know what you think in our comments section. Also, don’t forget to check back with CDL for all the latest updates, news, and spoilers on ‘Outlander’ and all of your favorite celebrities right here.

Congrats too the wifey and thanks to the strong fan vote!!!x https://t.co/UE7dybNGzf

We are styling #NYC in new collections tonight at the @GQMagazine and @Bloomingdales #ProjectUpgrade event. pic.twitter.com/RbQH7pFyR1