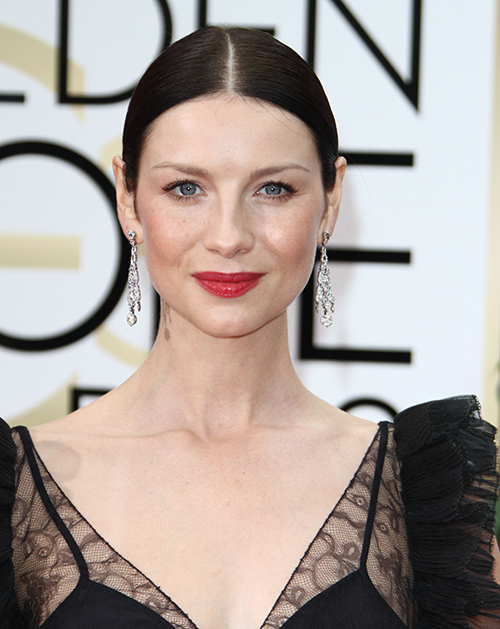 Are Caitriona Balfe and Sam Heughan, co-stars on the STARZ drama “Outlander,” finally going public with a real life romance? Has an off-screen friendship blossomed into love for the on-screen lovers? As previously reported, Sam has been seen whispering what we think are sweet nothings in Caitriona’s ear while waiting for filming to resume on the set of “Outlander.”

It could have been a little joke shared between work buddies because whatever Heughan murmured in Caitriona’s ear made her giggle an extra on set previously revealed. Oh, and there was Sam and Caitriona enjoying some hand-holding along with the whispers and laughter, the insider divulged.

Fans really want to believe it’s possible that Sam and Caitriona have taken the friendship to the next level. Balfe has previously denied that there’s any off-screen fling going on. Caitriona said she was sorry to break fans hearts, but the only romance was the one between Jaime and Claire.

The actress even said that she and Sam became fast friends from the moment they met, but it would be impossible for them to co-star and be together outside of work.

Plenty of other actors and actresses have been able to work together and be together, why not Caitriona Balfe and Sam Heughan? If you have a solid friendship, that’s a great basis for true love, right?

Season two of “Outlander” will premiere on Saturday, April 9 on STARZ, so maybe Caitriona and Sam are waiting to make their big announcement until then? Coyly holding hands while walking the red carpet as the paparazzi snaps dozens of photos seems to be a popular way for couples to reveal that they are indeed dating.

How much longer will Sam and Caitriona make us wait before letting fans know they’re together for real? Heughan and Caitriona certainly do make a gorgeous couple, don’t you think?

Do you think Sam Heughan and Caitriona Balfe are dating? Will the very single co-stars be the next hot couple? Sam will probably break a lot of female viewers’ hearts when he is officially off the market. Is Caitriona the lady who has who Sam’s love? And what about Caitriona? Will there be an abundance of male fans that will be brokenhearted if Sam has captured Caitriona’s heart?