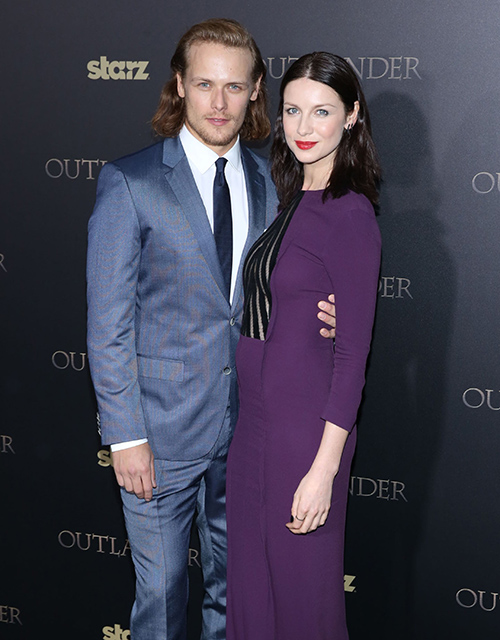 Are Outlander stars Sam Heughan and Caitriona Balfe finally going public with a real life romance? Fans have been waiting for this news since the first spark of onscreen romance ignited between Sam and Caitriona.

Sam Heughan and Caitriona Balfe have tried to keep their relationship on a “friends” only basis from the beginning. After they grew closer together, it became more and more difficult. Add in the fact that the fan base for Outlander was practically begging for a real life romance to emerge, well, everything could be turning into just that!

All of the lighthearted joking and friendship is turning into a relationship that they are going to have a really tough time denying for much longer.

On the set of Outlander, there are far too many eyes and ears that aren’t sworn to secrecy when it comes to Sam and Caitriona’s chemistry off the screen. An extra for the show revealed, “Sam and Caitriona were taking a short break between scenes when I saw them off to the side, holding hands and Sam was even whispering in her ear. She was laughing at whatever he said and well, they looked like an ordinary couple.”

Could this be what fans of Outlander have been hoping for? Perhaps these stars have changed their minds since Caitriona Balfe told E!, “It’s funny. We’ve always said from the get go that we’re incredibly great friends. And to have that friendship and that closeness and to be able to get along as we do on set, it’s great that we’re able to get along that well. We’re not together. I’m sorry to break people’s hearts. They like to try to maybe replicate the Claire and Jamie story. But I think it would be difficult for us to work together and be together.”

Sometimes it’s only a matter of time. If there are real feelings involved when you’re working that closely with someone, it more often than not turns into the real deal.

How do you Outlander fans feel about this? Will you be rejoicing when Sam Heughan and Caitriona Balfe make their first public appearance as a couple? Share all your thoughts in the comments below! And be sure to check back here at CDL for all the latest news on your favorite celebrities!