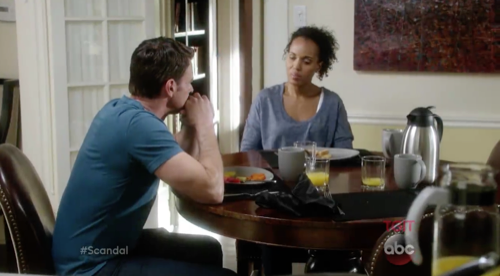 Tonight on ABC Scandal starring Kerry Washington continues with another exciting episode in an all new Thursday April 21, season 5 episode 18 called, “Till Death Do Us Part,” and we have the recap for you below. On tonight’s episode, Olivia (Kerry Washington) uncovers the details about Jake (Scott Foley) and Rowan’s plot and must make an agonizing choice as she attempts to thwart it.

On the last episode, Backstabbing abounded as election season heated up, but a potential leak spooked several candidates, which forced temporary alliances among adversaries to keep their agendas hidden . Did you watch the last episode? If you missed it, we have a full and detailed recap right here for you.

On tonight’s episode as per the ABC synopsis, “Olivia uncovers the details about Jake and Rowan’s plot and must make an agonizing choice as she attempts to thwart it. Meanwhile, Jake’s origins with B6-13 are revealed through flashbacks.”

Tonight’s episode of SCANDAL is going to be absolutely incredible and you won’t want to miss even a minute. We’ll be recapping it for you right here.

#Scandal starts with a kid playing with toy soldiers while his parents argue. He’s upset.

Jake brings Olivia some food but she turns her back on him. He says do something with your hair.
He tells her what she did to Andrew was deserved. Rowan says she’s in the clear on his death.
Rowan calls Jake son. Rowan tells her they should take a walk today and says he got them some puzzles.
She doesn’t speak and lies there. Rowan says Jake and Vanessa will be married Saturday and they want her there.
Back in time we see Jake in the brig and Rowan meeting him the first time. They give him a contract for B613.
He says his name is Pete Harris not Jake Ballard then he says no thanks. They tell him he’ll be discharged and is facing criminal charges.
Rowan says his record of violence is stunning. He says he has unchanging disrespect. He comes at Rowan who knocks him done.
Rowan says be my bitch or a prison bitch. He says he Jake Ballard and be my bitch.
Olivia gets up and gets dressed for a run. Jake and her dad are pleased. She goes for a jog.
She meets Huck and Quinn and tells them Jake and her dad are buying her act.
Olivia says the wedding moved up and they need to find out more. She jogs away. Quinn and Huck start the wedding investigation.
They’re stunned 600 movers and shakers are coming. Huck says this is Rowan. Vogue is even doing a spread.
They update Olivia and she says she has to use Jake’s weakness for her. Jake checks with Liv before he and Vanessa go out.
He finds her sniffly in bed. She says she can’t go to the party. She cries and says she can’t go back to the White House where she killed him.
Jake comforts her then Vanessa comes to the door. He tells Vanessa he will meet her there and she goes off on Jake.
Rowan intervenes and Jake tells him they need to slow things down. Rowan says no and Jake caves.
We see Jake at B613 training and he and Charlie bicker. Rowan pulls him into the hall and tears him a new one.
Jake comes at him and Rowan beats him brutally. He says no one takes command. Jake says go to hell and Rowan kicks him in the face.
Jake talks to Fitz on the balcony. Fitz says he’s surprised he’s getting married then says he thought he’d be with Liv.
Fitz asks if he loves Vanessa and Jake says it’s easy. Fitz says he’s never had easy. He asks if Fitz misses her. He says it’s good to be free.
We see a guy beating Jake brutally. Jake says he hits like a bitch. The guy tells Rowan that Jake is a lost cause.
Rowan comes over and touches Jake’s face then says one month in the hole. Now Jake finds Olivia drinking when he comes home.
She asks about the party and he says he played his part. She offers him booze and giggles.
Jake sits and drinks. Olivia says she knows her dad is making him marry Vanessa. He says it’s fine.
Liv says he doesn’t love Vanessa and then laughs and asks what he wants. Olivia says she must killed someone and this is all part of her dad’s plan.
She says admit you don’t love her and he screams that he doesn’t. He says she’s playing with him. She demands to know what’s going on.
He says he’ll be on Edison’s ticket as VP. He says Rowan wants what’s best for them. He says she knows he will only ever love her.
Then Jake says she never chooses him and he always ends up wanting her and in love with her.
Liv says don’t marry her and he yells what am I supposed to do. She walks out. Later she lies in bed then goes to him.
Jake kisses her. She kisses back.

Next morning Liv finds her dad and Jake at breakfast. He says eggs only since Vanessa has Jake on a Paleo diet.

Rowan leaves her with Jake. Jake asks what now. Liv asks if he’s s getting married. He asks if she wants him to.
She sighs then says she doesn’t know how to protect him from her dad. Jake says just be with me and pretend like last night didn’t happen. She says okay.
Then. Jake is out of the hole and Rowan asks what he thought about in there. Jake stares.
Rowan says some people find comfort in darkness. Rowan says Jake’s dad was scum and talks about how he abused his mother.
He asks if Jake heard his father raping his sister and asks what 17 year old boy does nothing about that?
Jake finally comes at him. Rowan says nothing will change what happened. There is no redemption.
Rowan says he’s not him. Won’t hurt him and will protect him. Jake cries. Rowan says I’m here. I’m your family.
Rowan hugs him and says he’ll take care of him and says let him go. Jake holds him and cries.
Now. Liv is in her room and opens a bag. Jake comes in and says he wants to be with her and doesn’t want to marry Vanessa.
He asks if she wants to be with him and Liv runs to him and kisses him. They go meet Quinn and Huck at the office.
They talk about how to get him off Rowan’s hook. Liv says jilt Vanessa at the altar and ruin the plan. She says it’s he only way.
Huck asks Liv if she wants to do this. She says she knows what she’s doing and wants to be happy.
Then. Rowan tells Jake it’s B613 graduation day. He says he has to have a choice between sacrifice and freedom.
Rowan says his record is clean and he can go home to stay and serve Rowan. He says he prepared Jake for this life but he has to want it over normal life.
Jake says thank you for everything and walks out. Now. The news talks about the big wedding later today.
Liv is at the wedding in her seat. Rowan says he knows what she’s planning and she needs to tell Jake she changed her mind.
Rowan says this is about Jake accepting his greatness. Rowan says if the wedding doesn’t happen he will slit Jake’s throat.
He says if she tells Jake he will slit his throat. He says Jake is his son and won’t see him fail like his daughter did.
Liv is distraught. She finds Jake and says she can’t be with him. He asks what happened and if Rowan got to her.
She lies and says she changed her mind. She says she doesn’t want him and says marry Vanessa.
She says he’s not good enough for her and is weak. She says he’s a booty call and side piece and she would destroy him.
Jake says she’s just scared. Liv says he’s wrong and pathetic. She says he would crawl back to her again and again.
He asks why and she says she lives Fitz and thinks about him when she’s with Jake. She says he’s a sad version of Fitz.
She says good luck being VP you’ll need it. Fitz sees her walking out but she goes past him and gets outside before she starts crying.
Rowan stares at Jake who is at the altar. Then we see Jake in uniform and he goes back to his home.
He goes inside and shoots his dad then walks out. His dress whites are blood splattered.
He picks up a toy soldier off the porch.  He was the little boy. Now. Vanessa comes down the aisle and he pulls back her veil.
Jake looks at Rowan then says I do after a long pause. Then. Jake came back to Rowan so he could see he took out his dad.
Fitz serves as best man. The wedding goes off without a hitch. Then. Rowan welcomed Jake to B613.
We see one last shot of the sad little boy.
THE END!