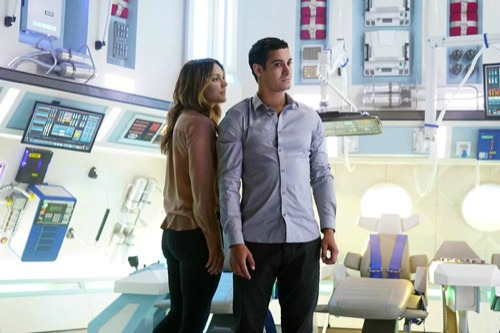 Tonight on CBS their hit drama/comedy Scorpion airs with an all-new Monday, October 10, 2016, episode and a new time-slot and we have your Scorpion recap below!  On tonight’s Scorpion season 3 episode 3, the team rush to return him to Earth before Walter (Elyes Gabel) suffocates.

Did you watch the last Scorpion episode where Team Scorpion must put aside their personal and romantic predicaments when anonymous hackers with unknown motives take control of U.S. military aircraft and warships and point weapons at American cities? If you missed it we have a full and detailed Scorpion recap, right here!

On tonight’s Scorpion season 3 premiere as per the CBS synopsis, “When Walter (Elyes Gabelis) accidentally launched into space in a rocket, he hallucinates about Paige (Katharine McPhee) as his oxygen runs low, and Team Scorpion works feverishly to find a way to bring him home before he suffocates.”

Walter is falling from the sky without a parachute.

The guys are sitting Indian style, meditating while Happy welds feet away. Cabe wants to know what is up with them. Paige and Tim come in. They are debating with the losing party responsible for dinner. Walter dismisses himself quickly. At his white board, he is tracking their movements so that he can avoid them. Toby thinks his approach is going to drive his crazy. Toby is dealing with his own type of crazy as he tries to hunt down who Happy’s husband is. Paige shows up and the two hide in front of the board.

Team Scorpion meets for their next job with Elliot leading the charge. Elliot needs the team to check the diagnostics of a rocket. Walter wants to run some test since Elliot’s engineers screwed something up. Sly sees that a huge storm is coming and Walter is in the rocket working with his intercom off. Lightning struck the circuit that Walter was working on. The whole thing is fried. The rocket is launching with Walter inside.

The team talks about all of the difficulties Walter will face – the computer is fried, atmospheric pressure and more. Everyone, especially Paige, is getting upset while Walter tries to survive. The rocket is sharing as he holds on tight as Walter reaches space. The rocket will run out of fuel in 26 hours and crash to earth. They need the help of the Russian consulate in order to save Walter.

In the rocket, Walter tries to reach out to the team while they try and form a plan to save him. Page and Tim meet with the leader of the consulate. The Russians want credits and Paige agrees to save Walter. Tim questions her extreme measures and she tells him she would do it for any member of the team.

Cabe has to make a phone call to the White House to get permission well the team finally context Walter and space Walters parachute is shot he thinks he is 25 hours before you will crash a Russian spacecraft is headed his way.

Walter is having full-blown hallucinations due to his lack of oxygen inside the rocket. He sees Paige and begins talking to her while Sly and Toby witness his troubled state. Suddenly, Walter is dancing with Paige while they are dressed up, music is playing in the back ground.

The team comes up with a way to get Walter oxygen. When Paige arrives Toby is thrilled that she could help him. She can talk him into pulling the lever that will give save his life. Walter pours his heart out and tells Paige he loves her – he is in love with her. Tears pool in Paige’s eyes. She gets him to pull the lever, but it is too late. He passes out. The team begins to fight about how to help Walter.

Cabe launches himself out from a plane to try and reach Walter and save him. While Walter is free falling and finally alert, the team tries to help him. They don’t have a Plan B and need Walter to help them.

Because Walter will fall into the ocean they need to aerate the water. Paige prays while the team stays quiet in anticipation to hear. Walter is alive after plunging into the Pacific.
Five days later……

Elliot questions Walter’s motives inside the rocket while Toby continues to search for Happy’s husband.