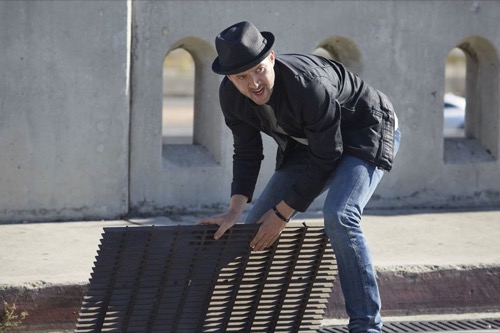 Tonight on CBS their hit drama/comedy Scorpion airs with an all-new Monday, October 17, 2016, episode and a new time-slot and we have your Scorpion recap below!  On tonight’s Scorpion season 3 episode 4, Toby gets closer to uncovering the identity of Happy’s husband.

Did you watch the last Scorpion episode where Team Scorpion had to find a boy from Ralph’s class who went missing on a field trip after he accidentally has a run-in with a deadly criminal? If you missed it we have a full and detailed Scorpion recap, right here!

On tonight’s Scorpion season 3 episode 4 as per the CBS synopsis, “Team Scorpion must find a boy from Ralph’s class who goes missing on a field trip after he accidentally has a run-in with a deadly criminal. Also, Toby gets closer to finding out the identity of Happy’s husband.”

Tobias pays a visit to an inmate who has a penchant for disco. Tobias is there to find out who Happy’s husband is? The inmate wants out and he’ll tell him. In honor of the Riddler, the inmate gives Tobias a riddle to solve and that will tell him who her husband is.

Paige and Tim are having lunch with her son, Ralph, who clearly doesn’t care for Tim. Tim tries to show off his sleuthing talents but Paige’s son has learned a few tips from Tobias. Paige tries to make excuses for her son, but Tim gets it.

Back at the office, the team is working on a way to make more room on their hot dogs. Introducing the u-dog, a way to get more condiments on their dog. Walter has even come up with a fitting song.

Sly is teaching the kids about car engines. Paige’s son Ralph sees a kid named Daniel who doesn’t like the noise of the engine. He comforts him. After school Daniel goes missing. Paige and Happy are there to pick up Ralph, who says he saw Daniel last. Daniel’s mother is worried sick. The Scorpion team takes the case. Daniel is Ralph’s friend and he wants to help.

Ralph remembers a strange man he saw with some unusual markers. They track Daniel’s tablet and discover the guy who was at the school has it. Cabe confronts him in a parking garage and is attacked by the man and an unknown man. Walter runs the car into the man, but the two take off. The team needs to find Daniel before the men do.

Daniel’s mother tells the team all she can about Daniel. He likes trains so Walter and Cabe head to Union Station while the team works on hacking cameras around the city to find him. They learn that he boarded a train. Cabe and Walter try to track him down. They run into one of the men who is getting on the train with a gun. They close the doors while Cabe fights to get the gun from him. He manages to shut his hand on the door while getting the gun. The man runs off.

Daniel would go somewhere quiet and safe. The guys head to the underground tunnels and find his headphones. They approach it from Daniel’s perspective to see where he may have gone.

Cabe and Happy discover an underground lab with a man who helped the two men to dissolve the serial numbers on their gun. Meanwhile, Sly, Tobias and Walter head next door to a brewery where they spot Daniel walking the edge of a silo with the gunmen next to him. The guy wants Daniel’s backpack with the tablet. Daniel falls into the silo and is enveloped by the dry grains.

The team discovers that the guys want Daniel’s tablet because he opened a file by accident that is connected to a smart bullets system. The guys are trying to target a politician by the name of Diaz. Cabe alerts his security team that someone is out to kill him.

Cabe tracks down the assassin. But Walter finds out that Diaz isn’t the target,  a propane generator is. He plans to take out an entire building and the people in it.

The assassin fires while Cabe shoots him. Happy catches the bullet with a large Diaz truck. All is well. Cabe questions Happy’s strange behavior while team Scorpion gets a barrage of gratitude, even a message from Walter and a special message from Daniel, who is grateful for their help and understanding.

Tobias solves the riddle – its Walter!! It for his green card. Tobias jumps on Walter while Paige looks in shock. Happy shares that she needs a divorce because she is pregnant with Tobias’ baby!