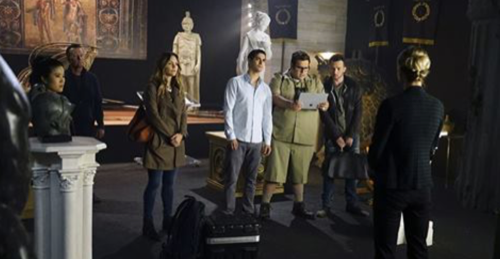 Tonight on CBS their hit drama/comedy Scorpion airs with an all-new Monday, October 24, 2016, episode and a new time-slot and we have your Scorpion recap below!  On tonight’s Scorpion season 3 episode 5, the team must stop thieves who robbed a rare-gem exhibit at a museum in order to extract materials needed to enrich a nuclear bomb.

Did you watch the last Scorpion episode where Team Scorpion had to find a boy from Ralph’s class who went missing on a field trip after he accidentally had a run-in with a deadly criminal? If you missed it we have a full and detailed Scorpion recap, right here!

On tonight’s Scorpion season 3 episode 4 as per the CBS synopsis, “Team Scorpion’s simple job at the Los Angeles Natural History Museum turns deadly when they discover thieves robbing a rare gem exhibit in order to get materials needed to enrich a nuclear bomb.”

Toby wants to get on with this Walter and Happy divorce. They show him their photo shopped honeymoon and how they tricked their 82-year-old INS worker with cataracts. Happy is disgusted with the whole thing. She’s also having morning sickness. It doesn’t help that Toby tried to get her to eat steak and eggs in the morning. Cabe thinks he can help with their divorce. He’s going to ask the INS to expedite Walter’s citizenship. Walter’s scared about the risks, but Toby just wants to be married to Happy so that they can welcome their child into the world as a normal married couple. The guilt gets to Walter, he takes Cabe up on his offer.

On to this week’s mission. At the local museum, there is decay on a pillar. All of the archeologists at the museum can’t figure out why. Team Scorpion is on it. They have 1 day to get it done. They will be locked in for 12 hours to get the job done. Toby forgot some of his equipment. He’s holding up the team. He takes off to get what he needs.

Meanwhile, Sly is running around like a kid in the candy store. He notice one of the birds is giving a distress cry. Cabe is also looking around at the medieval weapons. He senses someone behind him. Sly heads to the security guards to alert them about the bird but they are both passed out. They have been drugged. Someone comes at Cabe and begins attacking him with a weapon. He takes him down and uses one of the medieval holsters to keep in tied down. Sly finds him. The two head to Happy and Walter to warn them. It’s too late, Cabe and Sly see them being tied to chairs through a window by two men.

Walter thinks that the guys knew they would be there. Happy also thinks the whole thing is a set-up. Sly and Cabe are trying to find weapons. They spot the guys stealing weapons. They also need to get word to Toby and Paige. Sly wants to use the falcon to send them a message.

Meanwhile, Toby is experiencing sympathy pains for Happy while he his supplies with Paige, who tries to calm his nerves about becoming a father.

Cabe sets Happy and Walter free while Sly talks to the bird. They climb into the ceiling and into the air vents. Happy drops the vent and takes the head off of a $10 million statue!

Together they all prep the bird for flight. Cabe breaks the window above so that the falcon can fly out while the team runs for cover when the assailants come in shooting.

The falcon finds Toby and Paige, knocking Toby’s food for Happy right out of his hand. They find the note tied to the falcon and head for help.

The team are hiding out and after some back and forth they figure out that the men are El Doran. They are there for an asteroid with a valuable element inside it. Sly wants to hide and wait for help. Walter wants to stop them by stealing what they want 1st. They draw their attention by using some of the museum’s exhibits.

The men come out shooting. They shoot figures and not the team while Happy works to get to the space rock. Happy gets in and Walter starts putting the rock in jars.

Paige and Toby are speeding to get to them while Cabe grabs a whaling harpoon off the wall to fight them.

Meanwhile, Happy and Walter hide out after saving the rocks. Behind statues they have a heart to heart about Happy’s willingness to be a great friend. Paige and Toby make it to the front gates with Homeland Security but they can’t through yet. Walter tries to make a run for it to get the rocks to Toby and Paige but is intercepted y one of the thieves. Dirt from the robber indicates they come in from a tunnel they dug.

Walter heads down the tunnel and drops a concoction that alerts their exit. The team saved the day and all is forgiven about the damage they caused.

Toby thanks Paige for her advice while Walter apologizes to Toby for holding up Happy and Toby’s marital plans.

INS shows up. She’s not very friendly. And she has a lot of questions about Walter’s addresses. After she leaves, Toby is mad at their pathetic display of coupledom. They’re all moving in together if they don’t want to get caught being fake man and wife!