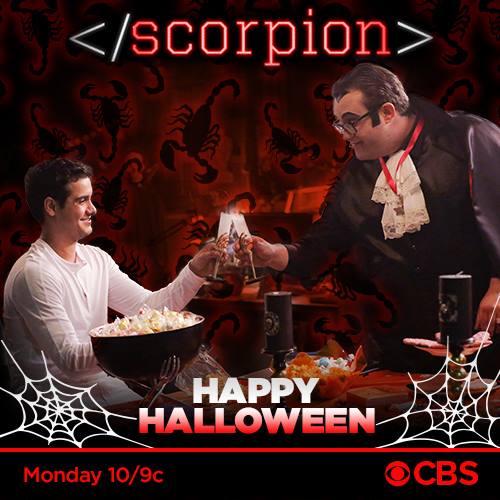 Tonight on CBS their hit drama/comedy Scorpion airs with an all-new Monday, October 31, 2016, episode and a new time-slot and we have your Scorpion recap below!  On tonight’s Scorpion season 3 episode 6, the team helps stage pictures of Halloweens from Walter’s (Elyes Gabel) past for his upcoming immigration inspection.

Did you watch the last Scorpion episode where Team Scorpion’s simple job at the Los Angeles Natural History Museum turned deadly when they discover thieves robbing a rare gem exhibit in order to get materials needed to enrich a nuclear bomb? If you missed it we have a full and detailed Scorpion recap, right here!

On tonight’s Scorpion season 3 episode 6 as per the CBS synopsis, “Before Halloween, Team Scorpion must infiltrate a deep, vast cave system in order to prevent a bat population from destroying the North America ecosystem. Also, the team dons costumes to stage photos from Halloween’s past for Walter’s (Elyes Gabel) upcoming immigration inspection.”