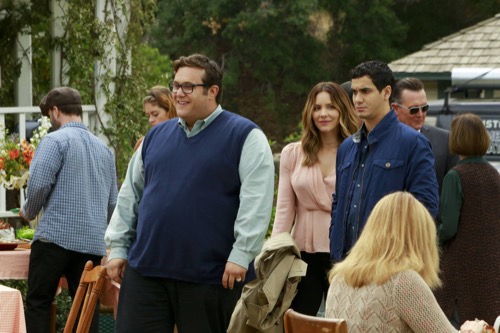 Tonight on CBS their hit drama/comedy Scorpion airs with an all-new Monday, November 14, 2016, episode and a new time-slot and we have your Scorpion recap below!  On tonight’s Scorpion season 3 episode 8, Cabe (Robert Patrick) and Toby (Eddie Kaye Thomas) try to alleviate tension between Tim (Scott Porter) and Walter. (Elyes Gabel)

Did you watch the last Scorpion episode where on Election Day, as democracy hung in the balance, Team Scorpion was called on when someone tried to throw the U.S. presidential election into chaos? If you missed it we have a full and detailed Scorpion recap, right here!

On tonight’s Scorpion season 3 episode 6 as per the CBS synopsis, “When Team Scorpion travels to Ireland for Megan’s one-year memorial, Walter discovers that a nearby lake’s natural disaster has created a poisonous cloud that could kill everyone in the village. Also, Cabe and Toby try to alleviate the tension between Tim and Walter.”

Walter and some of the others went to Ireland for Megan’s one year memorial on tonight’s episode of “Scorpion” however there was one person in the group that didn’t want to go and unfortunately, it was Walter. Walter apparently had a horrible childhood. His parents refused to try and understand him. So he didn’t really have anyone besides Megan when the other kids would bully him and that in turn made him resent his parents. But his parents had surprisingly wrote a few letters to him and they as well as some of the grew up with had said they were interested in seeing him again. And that had confused him so Paige tried to help.

Paige had said that they might have read a few of his feats and had been so proud of Walter that they shared what they found with their community. However, Walter had been skeptical about that and the mere thought of returning there had been made even more depressed. He was already upset that Tim and Paige were dating. So someone having a false idea of what he was walking into had just made him angrier and a few of the others had seen that. Toby, Ralph, and Gallo had all noticed that Walter had been off his game recently and they thought if he found common ground with Tim that the garage wouldn’t feel so hostile.

Though parent-trapping them was probably not the best idea. Ralph and Toby each told Walter and Tim a different story about how they had to help each other to win brownie points with Paige. So the two men thought that they were simply doing the other a favor when they got to Ireland and that blew up the second Walter saw a serious problem. Walter had seen that the lake near his home was going to blow up and he had tried to warn everyone yet the only ones that believed were his colleagues. Paige, Sylvester, Tim, and Gallo were used to believing that when he said there was a problem that there was a problem. And everyone else thought he was being Chicken Little.

Walter as it turns out, had made a lot of predictions when he was kid. He had predicted that an asteroid would hit the town and that there would be an earthquake. Yet, all of things had happened somewhere else or close by and they hurt him with the village. They had thought he was telling tales because he wanted attention and they eventually started to ignore him hoping that he would stop someday. So when Walter again had a crazy theory, at least to them, they didn’t want to believe him and they chose to carry on with the memorial for Megan. And so the only people that believed and were willing to help were people that knew he was rarely wrong.

But Walter’s idea on how to fix the lake before it killed anyone was what caused the rift with Tim. Tim and Walter had finally started to talk to each other with respect before that however Walter’s idea to create a massive straw to drain out the carbon monoxide in the lake was what broke them. Tim had apparently been in charge of the giant metal straw and he had heard Walter say that he was at the hot spot. So he dropped the straw into the lake because hot spot usually meant the drop off point in the military. And so by dropping it off in the wrong place, that ruined the straw as well as ruptured the carbon monoxide bubble under the lake.

So everyone in the village was suddenly at risk and unfortunately the carbon monoxide was slowly moving to the cemetery where they were all heading. Which meant they had to evacuate everyone. However, again no one believed Walter. They thought that it was another one of his “theories” that never panned out and so Walter had to prove that he wasn’t wrong this time. He had apparently used one of their cars as a giant sling-shot and then he had a Molotov cocktail directly at it though that hadn’t worked as planned. The cocktail had hit one of the fields and so the guy that owns was going to beat up Walter for burning his inheritance until something happened.

What happened was that Walter was finally proven to be right. The fire quickly dispersed because of the carbon monoxide in the air and so the village did believe they were going to die. Though Toby and Quinn told them that they wouldn’t be able to make it because the wind had picked up. So Walter had looked for another solution and he found one. He realized that he could use the Epsom salt in the cemetery to destroy the bubble and that he would need to find some way to breathe while he was in the carbon monoxide so Tim helped him find a way. Tim had used his military training to teach Walter how to hold his breath longer and together they destroyed the bubble.

It was heroic and thankfully no one died. Yet, Walter’s old bullies still tried to be a jerk to him and so Tim also had to teach him how to win a fight. So Walter was doing pretty good when someone tried to beat him and Tim stepped in to save him, but Walter’s mother eventually put an end to that because she had wanted to remember her daughter. Megan had after all touched a lot of lives so everyone came together in the end to honor her and afterward Walter did admit that he was a jerk sometimes when he was younger. Like when he would use his intelligence to make others feel dumb. So his bullies admitted that they used their strength to make him feel weak.

But Walter did get recognition for what he did and he saw that his parents did love him. So when he returned to the garage, he was in a better place and stopped being upset by the parent-trapping. He said that he didn’t realize that he was taking his anger out on everyone and that he was going to pay a little more attention to his actions.