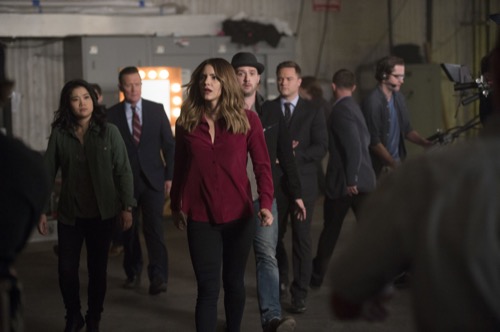 Tonight on CBS their hit drama/comedy Scorpion airs with an all-new Monday, November 6, 2016, episode and a new time-slot and we have your Scorpion recap below!  On tonight’s Scorpion season 3 episode 7, the team must stop someone who tries to intervene in the U.S. presidential election on Election Day.

Did you watch the last Scorpion episode where before Halloween, Team Scorpion had to infiltrate a deep, vast cave system in order to prevent a bat population from destroying the North America ecosystem? If you missed it we have a full and detailed Scorpion recap, right here!

On tonight’s Scorpion season 3 episode 6 as per the CBS synopsis, “On Election Day, as democracy hangs in the balance, Team Scorpion is called on when someone tries to throw the U.S. presidential election into chaos.”

Ralph is working on a school project about voting, the issues and the concerns on Election Day. Cabe had some humorous words that had Toby rolling with laughter. Sly is worried about imminent domain. Paige arrives with her dress for the veteran’s ball. Tim tells her that his parents are in town and they are going too. The gang, except for Walter, jump on Paige as soon as Tim leaves the room. Walter does interject to defend Paige.

The White House services arrive. They need help, but that can’t include Walter he isn’t a citizen. The team gets upset but they need to take the job because the president has personally asked for their help. Paige asks Walter to watch Ralph.

The team arrives to a warehouse area where they updated about the job – they need to help the servers for Election Day. They are overheating and it could affect the election. The team makes their way into a storage locker and down under ground. Sly determines that someone is hacking the server and stealing all of the data.

Walter partners up with Ralph so that he can keep track of the team. The team heads to where they think the source of the hack is coming from – a local news channel. The source is coming from the west wall. They plan to look at the camera security footage. The head of the news channel wants a subpoena for the film footage. The team hacks her phone and replaces her guest star with Toby, who goes on live TV and fights with the host. While Toby gives them a show, Tim and Happy push their way into the film room and manage to trick an employee into giving them what they need. They discover that the president’s chief of staff is the one messing with the server.

Walter and Ralph hit the road and make a fake FBI ID to intercept the food truck on the tarmac that is going to air force one. Walter gets on board while Ralph sets off a soda bomb that clears the plane. Walter finds the tablet that is running the software that is hacking the server.

Walter tells the team he knows who is behind it. But before he can tell them, the secret service storms in. Cabe manages to intercept the tablet and locks himself in a room. Toby and Happy try to help him remotely but the program is in Chinese.

After some back and forth, the gang manages to stop the hack. Tim and Paige leave for the ball in front of a very sad Walter. The INS shows up grants Walter his citizenship! Happy finds out that she isn’t pregnant after all. She is upset and has to tell Toby. She begins lashing out. She is angry. Toby consoles her.