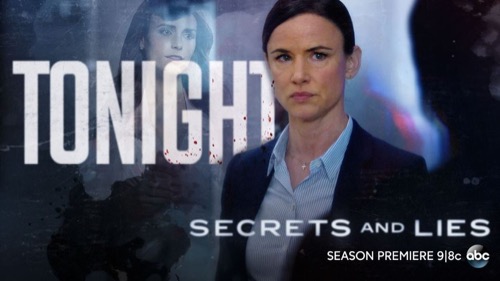 Tonight on ABC their explosive hit drama Secrets and Lies premieres with an all-new Sunday, October 2, 2016, season 2, episode 2 called, “The Husband,” and we have your Secrets and Lies recap below. On tonight’s Secrets and Lies episode, Cornell hones in on Eric following the revelation of an alarming misdeed from his past, so Amanda tries to help him prove that his relationship with Kate was the real thing and turn the detective’s attention elsewhere.

Did you watch last week’s Secrets and Lies premiere episode where Eric (Michael Ealy) was attending a party to honor his dad passing over the reins of the company to him when suddenly a tragedy struck. Eric’s smart and beautiful wife, Kate Warner (Jordana Brewster), was found dead, and life, as he knew it, was over. If you missed it we have a full and detailed Secrets and Lies recap of the last episode, right here!

On tonight’s Secrets and Lies episode as per the ABC synopsis, “Eric’s shocking past transgression leads Detective Cornell to interrogate him, revealing the first of Kate’s many secrets. Desperate to prove that his life with Kate wasn’t just one big lie, Amanda helps him search for answers. Despite her strong objections, Eric wants to bring his new findings to Detective Cornell. However, once he sees an ex-girlfriend – one of his worst nightmares – with Cornell at the police station, his hopes of redirecting her investigation quickly fade.”

Eric had an explanation for Steven Porter’s death on tonight’s episode of “Secrets & Lies” and fortunately he had remembered to talk to Detective Cornell with his lawyer/sister. So Eric was able to tell his story without anyone adding innuendo and his story was that Steven’s death was accidental. Steven had apparently been a bully when Eric was younger and so Eric had stood up for himself one day by punching Steven. But no one knew that Steven had a broken neck or that one simple punch would kill him.

However, Cornell had wanted to ask about more than just Steven. She had also wanted to know about the black guy that Kate had one day when she showed up at the office and she wanted to know if Eric knew that his wife withdrew a hundred grand from their joint back account. So Eric could only answer one of those charges. Eric had said that the black eye had been accidentally because he had a cupboard open one day and Kate had walked into it yet he hadn’t known that his wife had withdrew any money.

So Eric had wondered about that money and he had later told a friend that he thought it could be in Kate’s P.O. Box. The same box that he hadn’t known about until recently. Yet, Eric had a problem with following up on checking the box for himself because Cornell had already beaten him to it. Cornell had also found out about the box and she had told Eric that as the next of kin she would be sure to send a list of its contents to him though Eric didn’t really want a list. Eric wanted to see what was in the box for himself.

Cornell, though, didn’t honestly care what he wanted because she suspected he had something to do with his wife’s death and the evidence was mounting up. Eric had been on the roof on the night in question and there had been serval things about his own wife that he hadn’t known. Like how she had a baby before meeting him, a second IPad, a secret P.O. Box, or that she had both withdrawn money and had met up with her ex-boyfriend several times all within a month. So any if not all of those things could have led to Eric snapping and killing his wife.

Though Eric swears he didn’t kill Kate and so he was trying to having a tough time proving that. Eric had Cornell breathing down his back, but he also had his coworkers and investors to contend with. There were naturally some people that had whispered about him when they saw him and there were others that just chose to quit. So Eric felt like he had to take action about what was happening before the entire company went under and the only way he thought he could do that was by calling a meeting with everyone.

Eric had called in all of his coworkers and he had told about what happened to Steven Porter. So he told them that he had been target at school and that Steven had bullied for years however all that changed with one single punch and that he has regretted what happened to Steven everyday since. But Eric also told everyone that Kate had been his wife. He said he would never have harmed Kate and that no one knew how great his loss was because he had never gotten the chance to tell anyone that Kate had been pregnant. And when he was done telling them everything, he told them that they could leave.

Eric had said that anyone that didn’t think they could work with him or even be around him was free to leave the company if they wish. However, several people had already taken him up on that offer. Two analysts had quit and Kate’s personal assistant also hadn’t come back since everyone had been given leave. So Eric had done what he could with his coworkers and later with the investors yet sometimes his best wasn’t enough and so he had gone home after tiring day. And before he could go in, he found his best friend getting beaten up.

Neil had been in the hallway of his apartment building and so Eric never knew how the offender had gotten in though he had pushed the guy off of Neil and had tried to follow him. Yet, the press had been blocking the door and the guy had gotten away. So Eric had called the police because he had believed Neil when he said he didn’t know the guy that attacked him, but Cornell had a few more surprises up her sleeve. Cornell had actually wanted to ask Neil about the man he was describing because that same man had showed up at the office party on the night Kate died.

So Cornell had wanted to know more about this mysterious man because he seemed like the only person that was out of place at that party and she had also wanted to question Neil again about what he remembered that night. Neil though was refusing to offer up anything that could be used against him and so he continued to deny knowing the man even when everyone realized that there was more to the story. But Eric had remembered something and he had made sure to ask Neil when Cornell left.

Eric had remembered that Neil used to take a few hundred out of the firm’s accounts and say they were for business when really they were for partying. Though he hadn’t thought that Neil would do anything genuinely serious and so he was angry that Neil didn’t tell Cornell who the guy was. Therefore, he gave his friend an ultimatum. He said he talk or get out and find somewhere else to crash. So Neil went elsewhere and Eric was back to staying at the apartment by himself. And that did cause him to think about Kate again.

Eric had tried sleeping in their bed and that hadn’t worked out for him so he had tried sleeping on the couch. Yet, even there he remembered his wife and eventually his sister stopped by to save him from himself. Mandy had wanted to look in on him and she had found his apartment a mess. Eric had apparently been looking through everything to find out if Kate had anymore secrets and he had said so to his sister. So Mandy had asked him if he checked the bathroom. Mandy said that the bathroom was the place that women would hide stuff that no men would think to check.

But what Kate hid in the bathroom hadn’t made sense to Mandy. She and her brother had checked the place and they had found an extortion letter addressed to Eric. Eric was being blackmailed about his past with Steven Porter and, according to him, he said that he was just going to resign from the company if the truth about his past ever came out. So Eric’s plan had been to ignore the letter while it seems his wife had wanted to protect him. The letter had demanded a hundred grand and that had been the amount that Kate had withdrawn from their accounts.

So Mandy and then Eric figured out why Kate had taken out the money. Kate had been planning to pay the blackmailer and she had also tried finding out if there was any DNA on the letter. However, the DNA analysis hadn’t revealed anything and so Eric had thought about revealing the letter to Cornell. Eric hadn’t known if his wife had met up with the blackmailer or if that had been why she had been murdered so he wanted Cornell to figure that part out. And so Eric was just about to deliver the letter when he suddenly changed his mind at the last second.

Eric had seen who Cornell was talking to and that had been what changed his mind although his father didn’t know why. John Warner hadn’t wanted Eric to show the letter to Cornell after Mandy called him and told him what Eric was going to do because the last innocent person that Cornell put behind bars had died in prison yet he had been curious about the woman that had changed his mind. So Eric explained that the woman had been his ex-girlfriend and he also admitted that she was going to tell the detective what she wanted to hear. And, well, Eric hadn’t explained that part.

Eric had just left and went back to the office. Though he was growing concerned about Kate’s personal assistant and he had wanted to talk to the young man when Neil found him. Neil had wanted to say that he would never have done anything that could hurt him and that his secrets were something he was ashamed of. So Neil hadn’t really much on who the mystery guy was, but that’s ok because Eric went to go check on the assistant and just across the hall had been the man that beat up Neil.