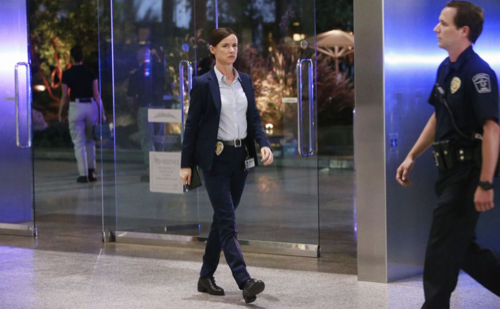 Tonight on ABC their explosive hit drama Secrets and Lies premieres with an all-new Sunday, September 25, 2016, season 2, called, “The Fall,” and we have your Secrets and Lies recap below. On tonight’s Secrets and Lies premiere, the downward spiral of the heir (Michael Ealy) to a private equity firm in Charlotte begins when his wife is found dead during a party for his father’s retirement, and Detective Cornell (Juliette Lewis) wastes no time making him a suspect in the case.

Did you watch last season’s Secrets and Lies finale, where Ben made a decision that changed his families lives forever and took the rap for his daughter who committed the murder?  If you missed it we have a full and detailed Secrets and Lies recap of the last episode, right here!

On tonight’s episode as per the ABC synopsis, “Eric (Michael Ealy) is attending a party to honor his dad passing over the reins of the company to him, when suddenly tragedy strikes. Eric’s smart and beautiful wife, Kate Warner (Jordana Brewster), is found dead, and life, as he knows it, is over. Overseeing the case is the unflappable and formidable Detective Andrea Cornell (Juliette Lewis). She immediately puts the grieving husband in her crosshairs, but, as always, secrets seep out about this seemingly perfect family and turn their world upside down.”

Cornell has a new challenge to solve when #SecretsAndLies premieres TONIGHT at 9|8c on ABC. pic.twitter.com/dArZPtIxfz

Eric Warner had apparently fallen apart after he saw his wife’s body on the ground and nothing had made sense to him when he realized that she was dead. However, her fall or what many thought was a mere fall was a lot more complicated than initially assumed on tonight’s episode of “Secrets & Lies”. So Detective Andrea Cornell had to quickly step in and be tough with Eric. Eric had unfortunately compromised the scene when he went to hold his wife upon finding her and that meant his DNA was all over the victim. And so the detective had told him that while Kate may have been his wife, the woman was now her victim so she told him to let Kate go.

So Eric did let go of his wife’s body and he joined his family back inside of the building. But there were a few questions that Cornell had to ask them and there weren’t easy questions. Cornell had wanted to know what was Kate’s state of mind and whether she had been drunk yet no one had a problem with these questions until they realized that Cornell had wanted to know if Kate jumped. And so Eric had said that Kate wouldn’t jump and that he knew that for a fact. He said his wife had been pregnant and that they had been happy when they recently found out about it so no one else in their family knew.

Yet, Eric assumption that Kate wouldn’t have jumped because of her pregnancy was speculation and so his sister Amanda or Mandy as she’s known had stepped in to help her brother. Mandy had told the detective that her family needed time to themselves and she said that her brother would answer whatever questions she had later on although she also stated that she was going to be there too because she was acting as her brother’s counsel. So Mandy had told the detective to leave them alone in a much nicer tone that actually saying the words and then she had spoken with her family about the detective the second Cornell left them alone in peace.

Mandy had told her family that they couldn’t trust Cornell. She said that the woman had a reputation and that they all had to be careful. Especially Eric. Mandy said that when a wife was murdered that it was usually the husband that did it. So Mandy had wanted her brother to be on guard. She hadn’t wanted him to get mistakenly arrested for him he was sure he didn’t do and so she had wanted him to bring suspicion to himself. Though her brother eventually decided to ignore some of what she said because he had wanted to go back to work the next so Mandy and their father thought it was in his best interest to go with him.

But the family wasn’t supposed to be around the crime scene so soon because Cornell had been running tests. Cornell and her men had tried throwing a dummy from the roof to see what happened up there that made Kate fall the way she did. So the tests had been something that Cornell had needed to run through as soon as possible though she never would have done so if front of the family. She hadn’t been expecting them back so soon so when she saw them approaching, she had tried to tell her men not to drop the dummy and mistakenly they hadn’t her. And so Eric’s first day back had been ruined by the fact he witnessed what it would have looked if his wife had been thrown from the roof.

Eric however hadn’t turned tail and run. He had still tried to get on with his day so he had gone up to his office with his sister and father and Cornell had followed them. Cornell had wanted to tell what was happening and will be happing over the next several days. So she told them that she would be interviewing the employees and that she didn’t need to interview Eric. Yet, that had seemed frightening. Eric had known that his sister thought Cornell wanted to pin the murder of his wife on him and he hadn’t thought the same until Cornell interviewed everyone but him.

So that had shaken Eric. He had wanted to know what everyone was saying about him and nothing his secretary what him to do (like plan Kate’s funeral) or what his friend told him could get him to calm down. However, pursuing Detective Cornell was not the right idea. Eric had followed her when the tension had gotten to be too much for him and he had told her that no matter what anyone says he didn’t kill his wife. And so the detective had asked him a question. She had asked him if he had been on the roof the night Kate died and he hadn’t been able to answer correctly.

Eric had chosen instead to reiterate that he hadn’t killed his wife. But that wasn’t a denial about being on the roofs so Eric had unintentionally placed him at the crime scene though he didn’t know what he was doing until the words had left his mouth. All he wanted to do was assure the detective that couldn’t have killed Kate. So the fact that he unfortunately placed himself in the detective’s crosshairs had made what admitted to that much worse. And it didn’t help that the autopsy results came back saying that Kate’s death was genuinely murder.

Though that wasn’t the only thing that autopsy revealed. The autopsy showed that Kate had had a baby before her pregnancy and apparently no one in the Warner family had known about this other child. So Kate had plenty of secrets and a baby was merely the tip of the iceberg. In the days after Kate’s death, Eric also found out that she had a secret P.O. Box and that she had two tablets although he had only known about the one. And that’s why after he found out about the baby he hadn’t known about, Eric tried to hack into Kate’s iPad at the house.

He didn’t get it, but he had tried his best and he had tried to right himself for Kate’s funeral at his father’s house. So the funeral had ended up being too much for him and his family. They had been putting up a brave front yet the condolences had been too much and Eric had gone on to hide with his siblings in their childhood playhouse. However, they were talking about their mother when Eric’s brother Patrick revealed that she was still alive. And that none of them had wanted to see her because of something that clearly happened in their past.

So they had all been on edge when their father made them rejoin the funeral and Eric caught detective asking his guests about Kate. Eric had been upset by that however his sister had tried to tell him not to engage with Cornell and he had ignored her because he thought he could clear things up with Cornell. Yet, just because he said he didn’t kill his wife doesn’t mean he didn’t kill his wife and the reason Cornell had goaded him about that was because of Steven Porter. Steven was apparently the guy that Eric accidentally killed during his stay in a juvenile detention center.