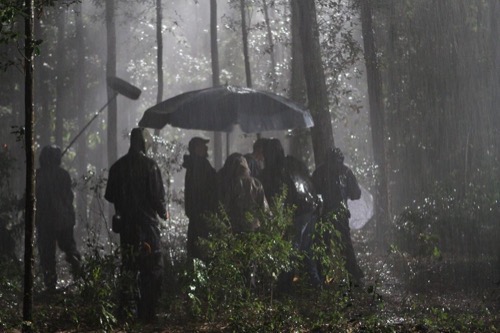 Tonight on ABC Secrets and Lies premieres with an all new Sunday May 3, season 1 finale, called, “The Lie,” and we have your weekly recap below. On tonight’s episode In the Season 1 finale, Ben [Ryan Phyllippe] tries to relax and enjoy the Christmas he missed with his family when he’s certain he didn’t cause Tom’s death, but his plans are changed by a shocking discovery. Meanwhile, Cornell [Juliette Lewis] prepares to make an arrest after all the evidence has been retested.

On the last episode, Ben’s (Ryan Phillippe) discovery in the attic further exacerbated his tension with Christy (KaDee Strickland), who, to make matters worse, continued to keep the kids away from him. When Ben finally did get some much needed father-daughter time with Abby (Belle Shouse) at the Christmas fair, an unwelcome guest changed the course of the evening. Meanwhile, after the leak in the crime lab left most of the forensic evidence in Tom’s case unusable, Det. Cornell (Juliette Lewis) refused to sit idly by and wait for everything to be re-tested. She returned to the crime scene, hoping to find something new to drive her towards an arrest. Did you watch the last episode? If you missed it, we have a full and detailed recap right here for you.

On tonight’s episode as per the ABC synopsis, “Certain that he is not responsible for Tom’s death, Ben tries to finally relax and enjoy the Christmas that he missed with his family — until a shocking discovery changes his plans. Meanwhile, with the evidence having been re-tested, Cornell puts all the pieces together and prepares to make an arrest. But in the stunning conclusion, Ben makes a decision that will change his family’s life forever. The nightmare is only just starting.”

Tonight’s season 1 finale looks like it is going to be intense so make sure that you tune in to our live coverage of Secrets and Lies at 9:00 PM EST!

Ben is losing his mind on tonight’s season finale. And the situation he’s found himself in is only getting worse.

First everything began with Tom. Apparently, losing a boy he had helped raised had made him go off the rails but the thought of losing his daughter as well was just too much to bear. And so Ben believed, or made himself believe, he was doing the only thing he could to get his daughter back when he broke into Jess’s home. But the little girl wasn’t there and its time we stop thinking of her as a little girl.

It seems Abby had needed time for herself.

While everyone was looking for her, Abby said she had gone for walk and simply forgot to tell anyone. Yet, to her parents, the important thing was that she was fine. She was also in trouble when her mother found out what she did but otherwise Ben had nothing to worry about. At least at the time.

He did however have to worry about Jess. Because breaking into her home didn’t exactly look good when Jess was also claiming he raped her.

Last week, the two had slept together. And it was consensual. But, from all appearances, Jess took it to mean something more than it was. She thought it would be the beginning of something new. Possibly the family missed out on.

However Ben didn’t want to be with her. Not in the way she wanted. So Jess, while she’s off her meds that is, accused Ben of raping her. And Ben ended up getting arrested.

Though, Cornell came to the rescue.

Cornell knew Ben hadn’t raped anyone so she let him go and she talked Jess into calming down. But unfortunately things didn’t stop there. Because when Ben was arrested – a search of Jess’s property was conducted and a bloody jacket was found at the scene.

It was the same jacket that the murderer had worn when Tom was killed but Cornell knew it wasn’t Jess’s. See, she knew who the killer was and just didn’t have enough evidence to convince the DA to do anything about it. So she was still looking and in the meantime Ben finally heard that he was free.

He was free from suspicion and Ben wanted to see his girls. So he told Christy about the jacket and they talked. Apparently she was just as shocked as he was when they both believed Jess was the murder.

Yet that illusion soon faded for them when the girls were finally brought back home.

Christy and Ben wanted to make things easier on their daughters. So his wife was going to allow him to have the girls for New Years. But when Ben started to clean up – he found Abby’s shoes. And there was blood on them.

It didn’t take Abby all that long for her to break so her family heard about everything that had happened. She told them she had gone to Tom’s house that night and that she convinced the little boy to run away with her.

She said, with both of them gone, their parents will have to stop fighting. And according to her that’s what they both wanted. For their parents to stop arguing and hopefully get back together.

But then Tom changed his mind. He had left his cape behind and wanted to go home. So he was going to ruin Abby’s plan and Abby said she freaked out.

She hit him though she said she didn’t think she had hit him that hard. And she also said that she was going to get her dad for help but he wasn’t home when she got there. He had already gone on his run.

So Ben did what he thought he should. He burned Abby’s sneakers. And then he told Christy to take Abby and lie low for a while

His other daughter didn’t want to go with her mother and sister. It seems she was the only one that thought Abby should admit to what she did. Thus she stayed behind. And later she tried to talk her father out of the next part of his plan.

Sadly, Ben knew that Cornell was going to keep looking for the assailant so he confessed despite everyone’s wishes to murder.

And according to Cornell, it was premeditated.

Abby is a sociopath and her father covering for her will merely give her the opportunity to do it again. So Cornell is intent on bringing her in. Even if no one else will support her.

Meanwhile, on their little road trip, Abby finally let her mother in on what’s really going on.

When Christy said she didn’t know when Ben was going to be able to join them, Abby got upset. She said Jess should have moved away. In fact that’s what she was counting on – Jess moving away. So Abby was upset with herself for not following through with her original plan.

See, she wanted to drown Tom and make it look like accident. And with her child dead, Jess should… have… moved… away.