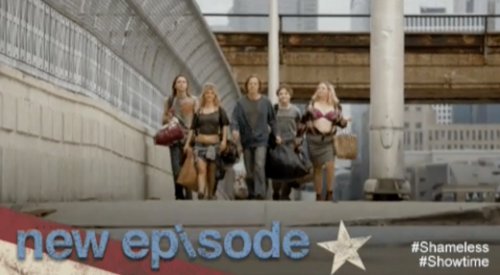 Tonight on Showtime the uniquely twisted and highly entertaining show Shameless returns with an all new Sunday, October 16, season 7 episode 3 and we have your weekly Shameless recap below. On tonight’s Shameless season 7 episode 3, Carl (Ethan Cutkosky) gets a syphilis scare; Ian (Cameron Monaghan) struggles with a breakup; business at Patsy’s hits the skids.

Did you watch the last Shameless episode where Frank, ready to disown his family, took Liam under his wing and started a new life barricaded on the top floor of the Gallagher home? If you missed it we have  a full and detailed recap, right here for you.

On tonight’s Shameless episode as per the Showtime synopsis, “Kevin, Veronica and Svetlana start a topless maid service; Frank makes new friends at the shelter to replace his family; Debbie’s new lifestyle comes to an abrupt end.”

Tonight’s Shameless season 7 episode 3 is going to be great, and you won’t want to miss it. So be sure to bookmark this page and tune in for our coverage of Shameless tonight between 9 PM – 10 PM ET! While you wait for our recap, make sure to check out all our Shameless spoilers, recap, news & more, right here!

Tonight’s episode of Shameless kicks off with Frank Gallagher tossing and turning at a crowded homeless shelter after his kids kicked him out. He wakes up after having a nightmare about his kids ripping him to pieces. His random girlfriend he picked up at the bar is still by his side though.

Lip and Fiona head home after a night of wild partying – Fiona is still hooked on “Tinder Sex” and hooking up with strangers. Her brothers lecture her about her hook-ups. Fiona and Lip get in to an argument over who has a more real job. After all, he is working an internship for free.

Frank and his girlfriend are woken up first thing in the morning. They learn that their homeless shelter is closing. Frank is going to be the hero and find his new homeless friends a place to sleep. Frank tells his girlfriend, Monica #2 – he named her after his ex, that he is getting a do-over. Frank picks random kids from the shelter and announces that they are his new family. There are “New Gallaghers” in town.

At the Gallagher house, Fiona is rushing off to work. Debbie’s nanny wants her pay, Debbie explains that her internet business slowed down but she will have the money by the end of the day.

Luther barges in, screaming that Carl gave his daughter gonorrhea. Carl makes a run for it – but Luther doesn’t look like he is going to drop it any time soon.

At the bar, “V” is worried about Fiona and her Tinder hook-ups. Svetlana changes the subject, she wants to talk about their new maid service business. Kevin arrives with the van – which has pictures of “V” and Svetlana topless painted on the sides. And, they won’t even have to hire a babysitter, he had carseats built in to the van.

A man walks up and begins swearing in Russian, Svetlana attacks him and they proceed to roll around on the ground punching each other in the face. Svetlana finally gets up and announces that the man is her father and he is going to stay with them for a while.

At work, Fiona is stressed, she gets a phone call from Liam’s daycare. Apparently, he punched someone. Fiona rushes out of work to go pick him up.

Lip isn’t having a much better day at work. Apparently, the company is having a video game championship. They have been playing for hours. Lip isn’t too happy when he learns that he has to change the guy playing video games’ pee bag – they are apparently so hardcore, they don’t even stop playing to go to the bathroom.

Frank heads to the bar – he is surprised to see that Svetlana’s dad is behind the bar. Frank introduces his new family and says that they stay for free, and they are going to stay in the apartment upstairs. Svetlana’s dad isn’t impressed, he tosses Frank out of the bar and all of his homeless fake kids.

Debbie heads out to boost some more stuff to sell online. She stops at a baby store and tricks the cashier in to going in to the back and starts filling her bag with jewelry and baby clothes.

“V,” Kevin, and Svetlana are having a bit of a disagreement. Kevin and “V” don’t want Svetlana’s dad to stay with them. They head to their first topless cleaning job. Kevin waits outside in the van. A disgruntled neighbor pays Kevin to move the van down the block so his kids can’t see the topless pictures. Kevin gets an idea, he grabs the girls and says they don’t even have to go to jobs – people will pay them just to get the van off their street and away from their kids.

Frank takes his new family to the diner and introduces them to Fiona, she’s not impressed and kicks them out. Frank isn’t out of ideas though, they crash a real estate showing and eat the snacks. After the realtor leaves, they decide to squat in the empty house. Fiona shows up at the ambulance to pick up Liam –

Fiona shows up at the ambulance to pick up Liam – apparently, his boss called her. They think that he has having a manic episode, and Fiona agrees, Ian has been acting strange and she thinks he is off his meds. She takes him home. When Fiona gets back to the diner, all hell is breaking loose, apparently, the cook quit and walked off. And, to add injury to insult, Chad is sitting there and he isn’t impressed. He tells her she needs to do better. Then, Fiona gets another phone call, she has to leave work again, Debbie is getting arrested for shoplifting.

Frank heads back to the homeless shelter. He tells them all that he found a new place for them to live – he takes over 20 people back to the house that he and his new family have taken over.
Fiona shows up at the store where Debbie is getting arrested. She has to pay over two thousand dollars for the stuff that Debbie was stealing or they will arrest her. Fiona convinces the cop and store clerk that Debbie is mildly retarded and she can’t control herself.

At home, Lip can tell that something is not right with Ian. Ian insists that there is nothing wrong with him, he finally confesses that he hasn’t slept in a few days and he thinks that his boss is right and he is manic.

Carl returns home and says that he tested negative for Gonorrhea – Lip explains to Carl that there is no way he could have given Dom the STD if he is negative, and that means that she has been cheating on him.

Fiona and Debbie barge in, they’re having a screaming match over her shoplifting. Fiona screams at her that being a good mom doesn’t mean having money, it means setting a good example and being around – not going to jail.

Carl sneaks back to Dom’s house late at night – he catches her sneaking out and decides to follow her to find out who she is cheating on him with. He follows her to a frat house where a much older guy is waiting for her on the porch and snaps a photo of them kissing. Carl heads back to Dom’s house – he shows her dad the photo of the frat house and the guy kissing Dom. Carl agrees to take Dom’s dad to the house. Carl and Dom’s dad return to the frat house and they brought along the swat team.

The next morning – Fiona decides to call a family meeting. Fiona informs them that she is done covering the bulk of bills in the house – she has run the numbers and tells her siblings that if they don’t pay their shares, she will kick them out. The only one that is getting a free ride from now on is Liam.

Tonight’s episode of Shameless ends with the Gallaghers heading outside and seeing Frank’s new homeless shelter a few houses down. He even convinced some nuns to set up a soup line in the house’s front yard.