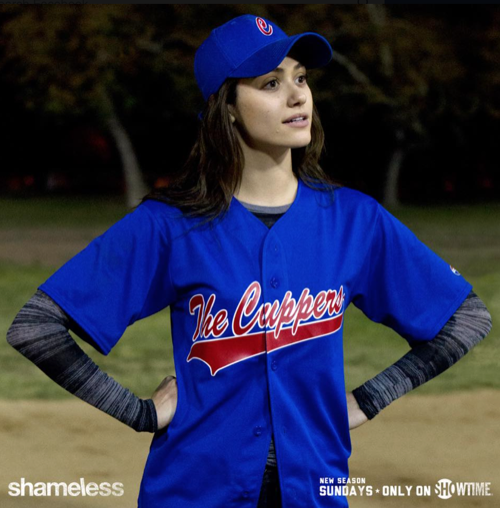 Tonight on Showtime the uniquely twisted and highly entertaining show Shameless returns with an all new Sunday, October 16, season 7 episode 4 and we have your weekly Shameless recap below. On tonight’s Shameless season 7 episode 4, Fiona (Emmy Rossum) drums up business by throwing a speakeasy party at Patsy’s Pies.

Did you watch the last Shameless episode where Kevin, (Steve Howey) Veronica (Shanola Hampton) and Svetlana (Isidora Goreshter) started a topless maid service and Frank (William H. Macy) made new friends at the shelter to replace his family? If you missed it we have  a full and detailed recap, right here for you.

On tonight’s Shameless episode as per the Showtime synopsis, “Frank (William H. Macy) worries that he and his new family will lose their Home for the Homeless shelter, so he plans a little goodwill for the neighborhood.”

Tonight’s Shameless season 7 episode 4 is going to be great, and you won’t want to miss it. So be sure to bookmark this page and tune in for our coverage of Shameless tonight between 9 PM – 10 PM ET! While you wait for our recap, make sure to check out all our Shameless spoilers, recap, news & more, right here!

HERE IS THE LIVE RECAP:

Tonight’s episode of Shameless kicks off with Fiona at work at the diner – she’s standing outside chainsmoking and checking out guys on Tinder. She just opened the diner for 24 hours, she was sure that she would pick up more customers after the bras closed, but it doesn’t seem to be working.

She decides that starting tomorrow they are going to start running a speakeasy and selling liquor after hours. Fiona has a plan to put the alcohol in coffee mugs so that the cops don’t see it.

Fiona heads home and everyone is having breakfast. She tells Carl and Debbie that it is the first of the month and they need to pay their halves of the bills. Debbie whines that she can’t afford it, she’s a single mom. Fiona doesn’t want to hear it. She tells Debbie she has two weeks to come up with the money or she is going to have to check in to the homeless shelter.

Speaking of homeless shelters, Frank’s illegal shelter down the street is bumping. He’s serving breakfast in the kitchen to all of the squatters and his new “family.” The neighborhood isn’t a fan of their new shelter. One of the neighbors are outside hanging up signs to protest the shelter – they want Frank out of the neighborhood.

At work, Ian has returned after his bipolar hiatus. His partner surprised him by decorating his locker for him and welcoming him back. Ian promises her that he will “keep his shit together” this time. He heads home and runs in to a guy named Trevor that is working with some of the at-risk teens as Frank’s new shelter, they hit it off and Trevor invites him to a gay club.

Lip heads to his internship and learns that he has been promoted to senior intern, and he has someone to train his replacement named Melody. Lip shows her how to make everyone’s coffee in the office, and she seems to have more questions about the company’s shady internet business than the coffee.

Lip gets a phone call from a frantic Debbie. She is applying to jobs and Fiona refused to watch her baby. She calls Lip crying and begs him to babysit but he can’t leave work. Debbie stops by the Alibi and Svetlana tells her that the answer to her money problems is finding someone desperate and stupid to marry and take care of her.

Inside the bar, “V” is still upset with Kevin for letting Svetlana’s Dad stay with them. She whines that she doesn’t want him around the kids, she feels like he is up to no good.

Meanwhile, Frank is giving the new Gallagher Family a pep-talk, he has them out hunting for furniture and planting shrubs and cleaning up the yard. He wants to make sure that the neighbors don’t have any reason to kick them out of the neighborhood.

Carl dumped Dom after he caught her cheating on him with a college guy, but he heads to the shooting range with her Dad – apparently they are besties now. Carl has a new career goal too – he wants to be on the SWAT team.

Ian heads to the bar and meets up with his new friend Trevor – they get ready for a night out on the town together and plan on heading to another bar. They start dancing, and Ian notices something is a little bit off with Trevor. He realizes that Trevor is a transgender, not a gay guy, and is totaled creeped out. Trevor gets upset and they wind up having an argument in the middle of the bar.

It’s late at night and Lip is still at the office. Everyone else has went home, so he snoops around the secret server room that he was ordered to never go in. He wants to know why there were FBI agents at the office and what they were interested in.

Fiona gets home late from work and Lip is sitting up in the kitchen – she tells him about the after hours party at the diner. Lip vents to her about the shady proxy servers at the office and the online gambling that they are covering up.

Lip and Fiona are still bickering over who’s job is more important and who can make money for the family. He’s annoyed because Carl and Debbie were calling his phone all day instead of Fiona’s.

Fiona stomps upstairs and grabs all of her clothes – she shouts at Ian that she is DONE taking care of the Gallaghers. She takes her stuff to the diner with her and begins planning the speakeasy party. Debbie stops by to use the printer and snarks at Fiona that she doesn’t need her any more and she is going to find someone else to take care of her.

Fiona heads in to the office and puts her clothes in the desk and makes a bed on the floor. It looks like she is officially living at the diner now.

The next morning, Ian and Trevor seem to have buried the hatchet and Ian takes trevor to the new shelter to meet Frank. Frank is upset – the neighborhood is holding an emergency meeting to kick Frank and his shelter off their street.

At the Alibi, “V” and Kevin are furious when they find out that Svetlana let her dad take the kids somewhere. V is freaking out, she thinks Svetlana’s dad is going to sell the kids on the black market, she wants to call the police but Kevin won’t let her.

At work the next day, Lip’s boss knows that he was in the server room. He want Lip to sign a non-disclosure agreement. While Lip is signing the paperwork, the FBI barges in to seize everything in the office. Lip grabs a bag of old I-Pads and slips out of the back door before he was to talk to the feds.

Carl is seriously considering heading down south to military school, thanks to Dom’s Dad. He even gave him some brochures and he is looking in to schools. Dom on the other hand, is furious that her dad is hanging out with her ex-boyfriend.

“V” and Kevin call the cops to help search for the babies, and they feel pretty foolish when they head back to the bar and Svetlana’s dads have brought the kids back and even brought a present for Kevin and “V” while he was out. Fiona barges in and wants to borrow some beer for her party – she and “V” get in to a huge fight about Fiona only visiting her when she wants something.

Fiona’s illegal party kicks off at the diner and it looks like a huge success. All of the Gallaghers show up to support Fiona, and Lip even apologizes for their fight. Deb comes storming in after the party is over, and she’s still miserable, apparently her search for a husband to take care of her is not going well.

Tonight’s episode ends with Frank chaining himself to the homeless shelter so that it can’t be bulldozed by the neighborhood – the local news cameras are on the scene and they call Frank a “Hero,” as he stands outside chained to the house he stole all night in the rain.